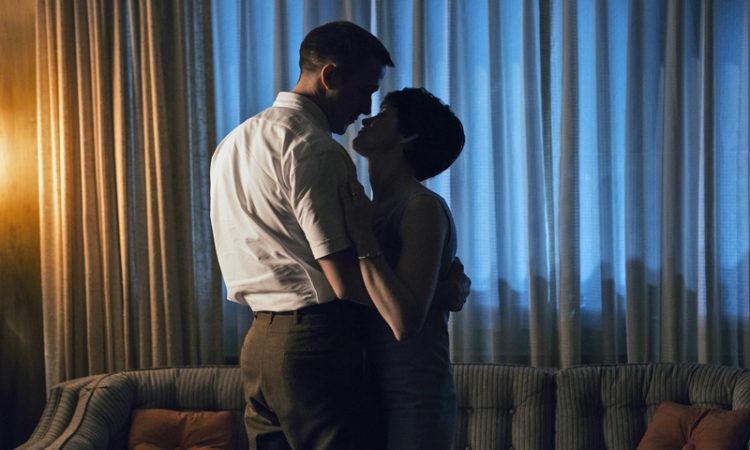 From the team that brought you La-La-Land, Damien Chazelle’s FIRST MAN is the story of Neil Armstrong, an unlikely hero… Review: NEIL MUDD

One can only assume that Hollywood has a whole heap of movies readied for next year’s half-century since the first Apollo moon landing. Why else release First Man now, marking the fiftieth anniversary of 1968 by default instead?

Not that the escalating conflict in Vietnam or an unravelling situation at home play much part in Damien Chazelle’s technically brilliant, strangely conflicted blockbuster. They can briefly be discerned in the movie’s wing-mirrors, but it is probably best not to dwell.

If Philip Kauffman’s epic yardstick adaptation of Tom Wolfe’s NASA tome The Right Stuff is more concerned with a grieving post-war America, First Man is more concerned with the grieving figure of astronaut Neil Armstrong (a near fatal flying experience and tragic death of his young daughter laying the foundations for such in the first fifteen minutes).

Ryan Gosling plays Armstrong as a tight-lipped enigma with a penchant for schmaltzy show tunes. He may have been the first man to set foot on the moon, but he seems to have been just as remote in real-life; here is a man who breaks the news to his two young sons that he may not be returning as if he was handling a press junket.

It is a nuanced career-besting performance by Gosling who has always made a virtue out of silence. He is equally matched – perhaps even pipped – by Clare Foy as Armstrong’s no-nonsense spouse Janet, she who dismisses the sweaty machismo surrounding her as ‘boys playing with bits of balsa wood.’ Like Gosling, Foy conveys a lot with a very little, positively dazzling each time she is onscreen.

Rocket junkies will find plenty to get worked up about in First Man’s brutally authentic set pieces – nerve shredding in IMAX – but in truth, the movie’s gaze lies elsewhere. For a blockbuster, it is surprisingly tender and intimate, little interested with the gizmos and hard-knocks of an astronaut’s working day.

Josh Singer’s sparing lyrical adaptation of James R Hansen’s Armstrong biography focuses on the fragile exigencies of family life, away from the buttoned-down brinkmanship and tax-dollar machinations of the Space Race.

The cinematography by Linus Sandgren is stunning, exquisitely lit and beautifully framed in an almost painterly widescreen. The moon landing has never felt more formidable nor looked this awe-inspiring, not even in the official NASA photography.

Still somehow despite all of this, First Man does not quite measure up, failing through its desire to focus on Armstrong to join the dots of humanity’s achievement in reaching for the stars.

In the end we are no closer to understanding Armstrong than we are at the beginning. As a character he spends much of the film emotionally cocooned behind glass. At the end, when Janet visits him in quarantine upon his return to earth, they are symbolically divided by a partition glass wall.

As an ending, it is strangely downbeat and probably speaks more to the present than the past. Despite Spielberg’s name amongst the credits as Executive Producer, First Man smacks more of Kubrick. It looks incredible, but it lacks the human touch!