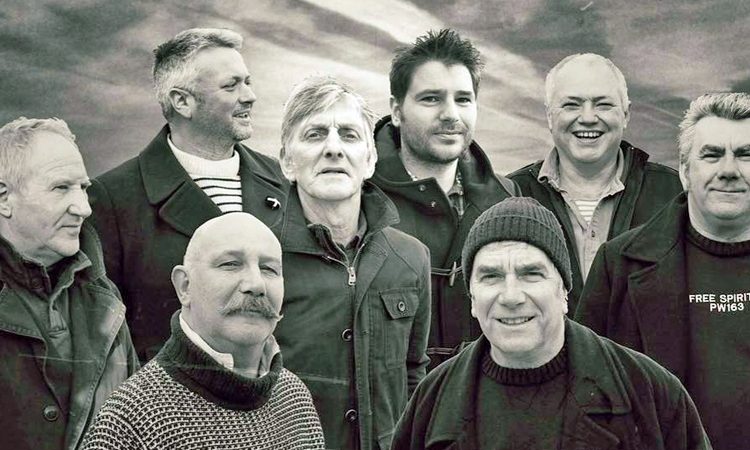 Back of the net..! Fisherman’s Friends on tour

Fisherman’s Friends whipped up a perfect storm at Ilkley King’s Hall on the first stop of a two-month long tour, says JAMES FOUNTAIN.

Belting out the mixture of sea-shanties and traditional folk songs which made their name, Fisherman’s Friends, the male choir from Cornwall were roundly appreciated by a capacity crowd at Ilkley’s King’s Hall Theatre.

Jim Macgeean’s Stormalong John followed, making it clear why the band has gained the popularity to earn them appearances at Glastonbury’s Pyramid Stage, The Royal Albert Hall, and a £1 million deal with Island.

These men are musclebound and self-effacing, most of them having put in years working for the RNLI. Audiences instantly warm to them and their winning way with harmonising traditional songwriting.

The group’s abundant wit punctuates the songs, giving the evening a special intimacy and often sending the audience into fits of laughter.

But while they may be modest, the men’s talent is not. The Mermaid reverberates with rich layers of harmony and only a guitar to back them.

After Sweet Sugar in the Hold Below – with Cleave leading with a crooning baritone solo – is followed by Won’t You Come Down to Yarmouth Town and So Fare Thee Well.

Perhaps the band, aged 38 to 69, are an antidote to Britons going through the identity crisis created by Brexit. Their songs are unashamedly British and filled with humour.

Blow the Man Down is cut with Cleave’s comical, bawdy rewriting: “All night long you gave me a clap/And that’s what she gave me and I ain’t going back”.

“They wrote a book about us,” Cleave informs the audience. “It wasn’t exactly kiss and tell, more scratch and sniff.”

The audience in the palm of his sizeable hand, the poignant lyrics of Keep Haulin’ contain sound advice from RNLI men that know: “Hold your course and don’t let go”.

A rendition of A Drunken Sailor toward the end of the night underlined Fishermen’s Friends’ attraction. Most of the audience haven’t sung or heard it since Primary School, but they will never hear it sung any better than this.

Fisherman’s Friends are on tour through February and March 2019. Details here.