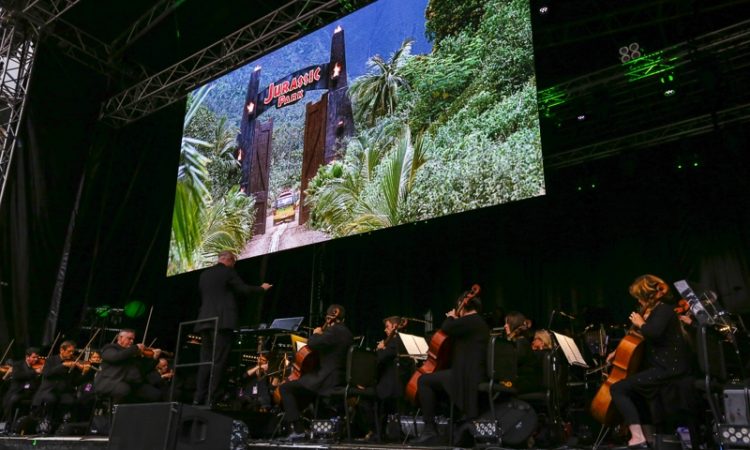 Going into Millennium Square to see Opera North‘s Jurassic Park in Concert, my daughter is whistling the famous theme tune. I keep telling her to stop, but then realise everybody is doing it. It’s so catchy. You know it as soon as you hear it. (You’re humming it now, aren’t you?)

Millennium Square is well organised with seating and gorgeous food and drink vans. And with time before the screening and an interval for refreshments, it’s already much more of an event.

We are sat near the screen, which they have focused on the orchestra. So the audience can watch the film and see a close up of the music makers at work. Brilliant.

It is amazing when you realise how much music goes into a film. You tend not to notice all the tiny parts building tension and drama.

For example, when the mosquito in amber is discovered at the very start, the musicians backs straighten, the conductor composes himself, and I think, But there isn’t any action yet! We haven’t even met any main characters! But they play every bit of music and it is really effective.

After a while I forget about the music as the film action takes over. However, every now and then, I see movement under the screen as bows are lifted in readiness and the orchestra strikes up.

So wonderful I point it out to my daughter. “Look,” I tell her. “That’s where the sound is coming from!”.

Sometimes the music drowns out the dialogue, but we don’t miss much. You can still see what is happening – someone mouthing ‘incredible’ with a dumb struck face as a Diplodocus passes by… [That would be Laura Dern – Helpful Ed] – so we can catch the gist!

And the music is so good it’s worth it. When it takes over it reminds us why we are there. If I wanted to watch the film, I could have stayed at home, but it’s great when the focus is on the music, and played so beautifully by the Orchestra of Opera North.

Then the rains came, at so similar a time to when they do in the film it is almost by design and we get absolutely soaked. It’s a shame, but I much prefer to be soaked in my seat in Millennium Square, than with the Raptors!

Jurassic Park in Concert was such a great experience. I would recommend it to anyone. Just make sure you take your water proofs!

Review of Opera North’s Symphonic Back to Basics