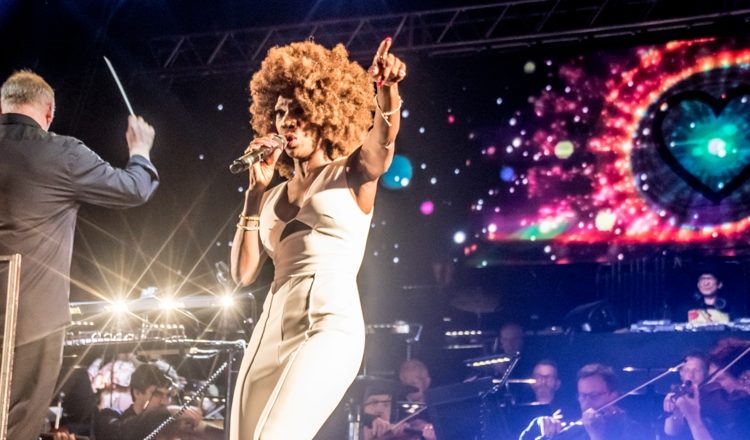 Rainhoods and ponchos trump hot pants and heels as OPERA NORTH teams up with BACK TO BASICS for some 90s classics. KIRSTY QUAYLE gets wet, but remains undampened.

Having been a regular at the original club night Back to Basics, it’s taken me a while to make one of Opera North’s Symphonic versions in the city’s Millennium Square. I am delighted by the profusion of beglittered people my age determined to relive those heady nights out of yore, but still be back home by twelve!

The DJ set at the start is your typical warm-up set, but as the orchestra comes onstage the music builds and we start to feel the heightened beat. There’s an anticipatory, party atmosphere. The rain does not even begin to threaten the feel good vibes.

It’s odd being at what feels like a festival in the middle of the city centre. The convenience adds to its appeal, with street food, coffee and ponchos all available. Horrified by the massive queue for the loo, I was delighted when I realised it was for the burger van… (Thankfully the bar had a much swifter service!)

DJ Dave Beer received little initial response from the crowd as people chatted, swayed and nodded along before the main event. His determination and enthusiasm won out though. In full-on DJ mode, he created energy and buzz, so that finally people were in the right party mood.

The orchestra opened with Adamski and Seal’s Killer and the crowd began its slow movement towards the front. By Such a Good Feeling was playing, the flock was closer to the stage and taking in images of pink roller skates spinning round and around.

The music was good, but I wouldn’t have known it was a live orchestra if I couldn’t see them with my own eyes, and I don’t know if this is a good or bad thing… At times the sound system didn’t really carry vocals and some acoustic impact was lost.

During the long interval, the rain returned and a chant of “Get the ponchos out!” rang out in tune with the music as the second half began. There followed an onslaught of ponchos and umbrellas and the glorious sight of strangers sharing brollies while dancing.

The atmosphere got better the darker it got, with brighter lights, strobes and a multitude of colours. Am I Dreaming? was euphoric, creating an infectious buzz and the audience all singing, dancing and hugging with the mantra, ‘I fucking LOVE this song’.

Heather Small from M People wowed in her skin-tight white jumpsuit and sultry moves. She really got the crowd going with Moving On Up though I thought it a great choice as one of the final songs, and a Back to Basics classic.

The finale included all five singers for an emotional piece. Lighting the stage meant we caught the glitter on some faces in the orchestra amongst the excellent projections behind them.

The evening was great; it was more about the style of the music than how it was delivered that made the atmosphere. In parts the vocals weren’t as powerful or loud enough and the bass was definitely lacking because we couldn’t feel it through our feet.

This didn’t matter in the end because this is a great concept by Opera North and provides a brilliant night out, as evidenced by one person not in a poncho: a tanned male in his 50s, sporting white vest and jeans, glitzy trainers and a huge fur coat. He danced all night like the past 20 years had never happened.