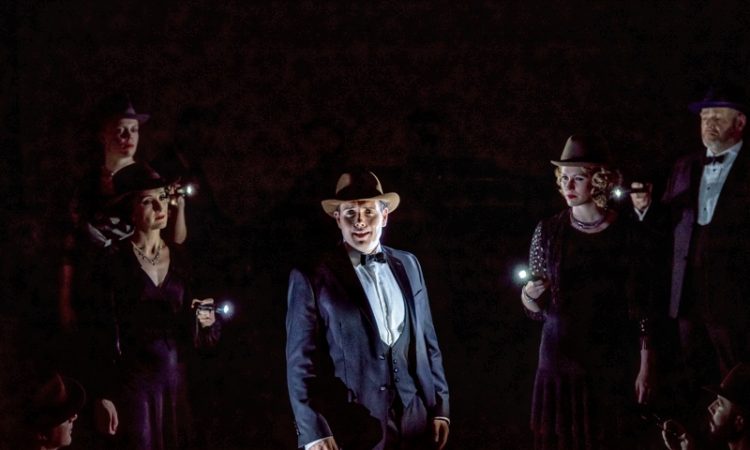 From Berlin to Broadway with Kurt Weill (Photo: Ant Robling)

There’s more to KURT WEILL than Mack the Knife, says ANNA CALE as she follows the composer from the mean streets of Berlin to the glitz of Broadway and discovers his music always had those on the margins of society at its heart…

Mack the Knife and I have a love hate relationship. This is mainly due to an ill-conceived school cabaret production back in the early 1990s which featured a rather questionable rendition alongside numbers from the Andrew Lloyd-Webber back catalogue.  So you can understand my slight trepidation when I realised that the song would feature heavily in this show. Would it trigger bad memories, or would this be the performance to win me round? You will be delighted to hear it was the latter.

A co-production between Opera North and West Yorkshire Playhouse staged at the exquisite City Varieties Music Hall, Berlin to Broadway with Kurt Weill was an exhilarating journey through the life and songs of the 20th century German born musical theatre composer. Taking the audience from his early career in 1920s Weimar-era Berlin to his Broadway shows of the 1940s, this was a mesmerising show with rousing performances from the Opera North company ensemble.

The cabaret staging worked well, giving enough to signpost the glamour, but also freedom for the audience to concentrate just on the music and performances. The songs came alive for me and I found the darkness of the early Berlin years particularly compelling. Weill’s creative partnerships with Bertolt Brecht and performer Lotte Lenya, (who was also his wife) resulted in the Threepenny Opera, featuring our old favourite Mack the Knife as well as Pirate Jenny, and The Rise and Fall of the City of Mahagonny which included Alabama Song. [A live favourite of David Bowie, factfans – Ed.]

The passion, corruption and challenging characters from the mean streets of Berlin had me seduced. These were characters from the dark corners of society. Weill and Brecht in their unprecedented style of opera allowed us to glimpse into that world and understand the social impact of the times.

There was modernity and relevance to it too. No schmaltz here, just playful tunes with truthful lyrics and a punch of realism. Mack the Knife’s jaunty melody is at odds with its grizzly story. As Polly’s Song was passionately performed, capturing the reality of transient love, I nearly got up and shouted, ‘me too, sister, me too!’ It was as real to me as any episode of Lena Dunham’s Girls.

The show took Weill from the 1920s German, through the subsequent rise of Nazism, to his new life in America where he embraced the American Dream. The frivolity of Broadway was evident in a shift in musical style. I’m a sucker for 1940s musicals, and the dreaminess of the works from those years, captured perfectly in the performance of the beautiful September Song, showed that change of pace.  Although Weill initially shunned his German roots, he never sold out completely. Those Broadway shows still focussed on everyday people.

Weill’s lasting legacy is perhaps the way he built bridges between opera and musical theatre, and showed how the genre can have a social conscience while retaining some cracking tunes. As Mack the Knife’s original lyrics suggest, he showed us ‘those in the dark you don’t see’.

From Berlin to Broadway with Kurt Weill, Leeds City Varieties