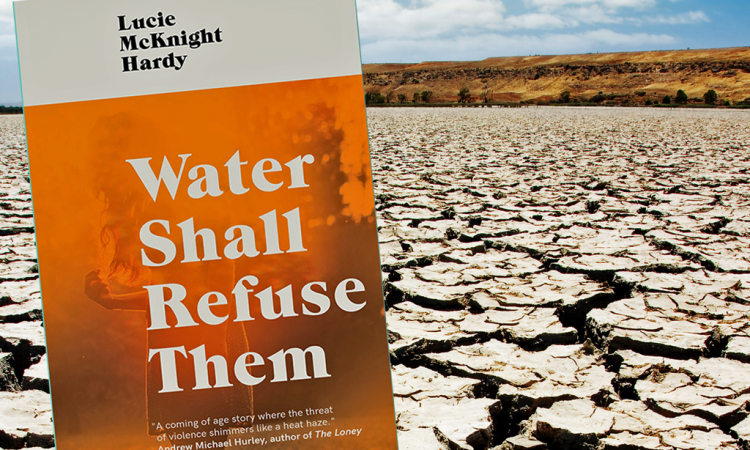 Summer of 76 | Water Shall Refuse Them by Lucie McKnight Hardy

As opening sentences go, Lucie McKnight Hardy’s takes some beating: ‘The head in my lap was heavy, and the heft of the forehead and chin sent it tipping forward every time we went round a bend.’

She had me at the first clause. But the cover and title, Water Shall Refuse Them, tells us this is a story less about Harvey Keitel style hitmen and more about witches.

Or, indeed, drought – specifically, the parched summer of 1976.

Centre stage is a family taking a couple of months in a Welsh village to recover from the death of one of their children by drowning – another level of meaning in the title. And at the heart of the story is Nif (short for Jennifer) our unreliable teenage narrator.

Each is unclean, not just literally for lack of water to wash in, but in their souls, and the book peels away these layers of guilt as surely as his psoriasis strips away the skin from the only innocent one among them.

Hardy’s crisp prose reminded me of several writers, all of them skilled at putting a movie in the reader’s head then making it resonate with meaning.

The publishers describe the book as folk horror, so I was expecting something like The Wicker Man. The book does not disappoint, inhabiting the same fictional universe as Daphne du Maurier’s Don’t Look Now or Paul Theroux’s The Black House.

At times, too much detail seems to accumulate around the smoking of a cigarette or the boiling of a kettle, until you realise what these moments add to the toxic atmosphere of the story.

Characterisation is strong throughout, and Nif’s devotion to the Creed, a kind of pagan death cult she has invented for herself, is a brilliant device that anchors an assured and impressively dark literary thriller.

Water Shall Refuse Them by Lucie McKnight Hardy is published by Dead Ink Books in July. For details and to pre-order click here.

John Lake is a novelist, DJ and one-half (with Mick McCann) of Armley Press.