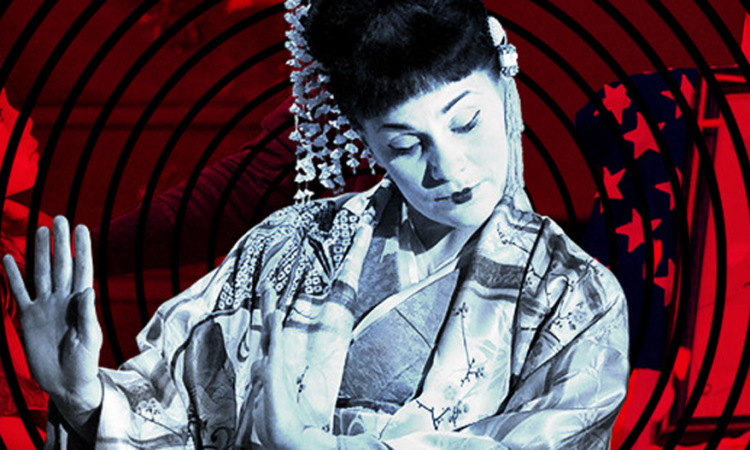 Madama Butterfly is Puccini at his most lyrical, emotional and passionate, but CATH ANNABEL detects dark contemporary resonances in Opera North’s latest production…

One of the best-known and best-loved operas in the repertoire, Madama Butterfly relies for its continued freshness and emotional power on that lead role, and in this new Opera North production, Anne Sophie Duprels brings plenty of both.

Her Cio-Cio-San is full of contrasts. In Act 1, she’s fifteen, still a child, yet forced by circumstances to become a woman all too soon.  In Act 2, she’s a mother (and abandoned wife), still only eighteen and shifting from girlish excitement at the prospect of lover Pinkerton’s return, to strength and dignity as she faces the extinction of hope.  Duprels sings gloriously, though one of the most moving moments in the opera is her silent vigil to the accompaniment of the Humming Chorus.

The opera’s moral centre is jointly occupied by Peter Savidge’s US Consul, Sharpless, and Ann Taylor’s Suzuki, Cio-Cio-San’s servant.  Savidge’s warm and sympathetic performance conveys the innate decency of a man whose every instinct revolts against Pinkerton’s abuse, who deeply feels Butterfly’s anguish, but is unable to prevent the unfolding tragedy.

Taylor vividly portrays Suzuki’s pain and her powerlessness in the face of Butterfly’s determination to hold on to the delusions of romantic love. There is a splendid moment when Suzuki grabs Golo, the marriage-broker (a sleaze of the first order, with photographs of child brides ready to offer anyone with funds), in a head-lock after learning that he is spreading vicious gossip about Butterfly.

The embodiment of entitlement, Pinkerton is brash and flippant in his dismissal of Sharpless’s pleas on Butterfly’s behalf. He is played with charm and arrogance by Merunas Vitulskis making his Opera North debut. He is not (quite) a Weinstein-like monster (it is impossible to evade the echoes of recent events in this tale of sexual exploitation), though he sees other people (particularly women) purely in terms of how he can use them: as the libretto makes explicit, this not only comes with being male, but also with being American.

In Act 1 he seems to own not only Butterfly, but the world. Ater his long-awaited return in Act 3, he has lost the ‘authority’ of his naval uniform, appearing in casual dress. He is visibly diminished by the evidence of Butterfly’s faithfulness and strength, revealing his cowardice when he refuses to meet her and leaves his new wife and Sharpless to broker the deal.

Puccini’s music interweaves Japanese instrumentation and melody lines with echoes or direct quotations from the US anthem (Pinkerton’s Theme). The score’s contrasts are echoed in the libretto, the costumes and props. In Act 2, Butterfly transforms herself into an ‘American wife’ while Sharpless’s attire becomes more subtly Eastern.  She places alongside her Buddhist shrine, a shrine to the USA, featuring the Stars & Stripes, Pinkerton’s photograph and images of American film stars.

Disowned by her family for having converted to Christianity prior to marrying Pinkerton, Butterfly is now utterly isolated.  Her conviction that she has an American marriage (as she understands it, one that is hard for either party to break) rather than a Japanese marriage that can be ended with one month’s notice by the husband, is a joke to Golo and a source of evident pain to Sharpless who knows the truth.

Anne Sophie Duprels is not only a wonderful singer, but a very fine actor.  She brings real subtlety and nuance to her portrayal of Cio-Cio-San in a performance that brings truth and intensity to Butterfly’s moments of hope and despair.  We hold our breath for the key moments – the ‘love duet’ with Pinkerton, ‘Un bel di vedremo (One Fine Day)’, the Flower duet with Suzuki – and Duprels duly breaks our hearts.

This is Puccini at his most lyrical, his most emotional and passionate. And these qualities are served admirably by this moving and beautifully performed production, which brings out the contemporary resonances of the plot without allowing them to overwhelm or distract.

It’s Anne Sophie Duprels night, and she is superbly supported by Vitulskis, Taylor and Savidge in particular, and by the Opera North orchestra which gives the score light and shade, delicacy and power.

MADAMA BUTTERFLY at Leeds Grand (28 February) and on tour at The Lowry, Salford (6 and 8 March), Nottingham Theatre Royal (13 and 15 March) and Newcastle Theatre Royal (20 and 22 March). Details here