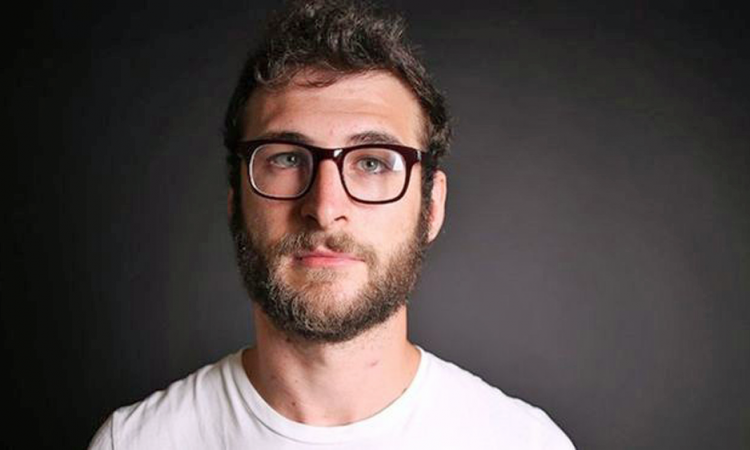 As SAMUEL HERTZ nears the end of a year that has seen him record the sound of silence, transform a museum into an instrument and turn melting ice into music, he tells NEIL MUDD that he is deadly serious…

Samuel Hertz gets asked about his surname a lot. Pretty much every time he gives an interview, in fact.

He must admit for a sound artist, it feels a bit too neat? Like a butcher being called Butcher.

“Journalists say, ‘There’s no way that can be your real name,’ but I assure you it is,” he says.

The Berlin-based composer and inaugural winner of the DARE Prize is nearing the end of a month long artistic residency at The Tetley in Leeds.

When I arrive, he is working on an idea for Immersion (an evening of “slow dance” and movement with dancers Layton Lachman and Mara Poliak) involving subsonic frequencies and wine glasses filled with water.

It is a long way from the showtunes he remembers growing up with.

“My mother loved musicals. I have vivid memories of dusting the countertops with Guys and Dolls blaring out which is virtually nothing like the music I’m making now.”

The bridge was provided by Hertz’s father. “He had a couple of Frank Zappa records and that sort of thing, so eventually I found my way through into weirder and weirder territory.”

Another early influence was Morton Subotnick, whose 1967 album Silver Apples of the Moon is a benchmark in experimentatal recording and composition.

Assigned to the project as a technician, Hertz joined the composer and other musicians onstage thanks to his ability to read Subotnick’s complicated experimental notation.

“He was great to work with. These were quite old pieces of his, restaged very differently from how he himself performs them solo. It was interesting because he was rediscovering these pieces that had been reconfigured and cycled through time.”

Though it requires a leap of faith, I suggest the theatrical quality of his mother’s beloved musicals and Subotnick’s abstract impulses both inform Hertz’s own work. His piece Gunslinger, for instance, reimagines environmental collapse as an epic Sergio Leone Western.

“Now that you say it that way it’s an interesting take because more recently I’ve switched direction. I initially came to music from a classical background and found my way into more experimental composition using electronics. Along the way I started working with choreographers and dancers (Hertz has composed music for the Merce Cunningham Dance Company) which tends to be much more to do with scenography.

“I’m a bit fed up with the state of music in general – which is not to say music as a whole. There’s a much more dramatic or theatrical route that can be taken, especially when you’re dealing with the kind of topics I’m dealing with which involve the human element you sometimes lose behind the cloak of a chamber ensemble.”

For Gunslinger Hertz recorded water melting from a cliffside ice sheet and then ‘transcribed’ it for two guitars. Ruminating on the world’s fragile failing ecology via the prism of echo-drenched reverb and surrealistic cabaret – in performance the score is progressively discarded, washed and hung up to dry – works surprisingly well. Imagine a collusion between ambient musician Harold Budd and the playwright Samuel Beckett.

In the past for Opera North, sound artist, Jez riley French has miced-up the Humber Bridge and composer Gavin Bryars has explored found sound and theatrical performance. Where does Hertz see himself fitting in?

“Somewhere squarely in the middle,” he says. “I always have the impulse to adapt to topics at hand, to branch out and see what fits my working.

“Now the instruments might change – and I think this concept has changed overall – but I identify much more strongly with sound artists who are also composers who engineer more situational, multimedia aspects.”

Last year Hertz became the first recipient of the DARE Art Prize which aims to challenge artists and scientists to work together creatively. Judging by his prodigious output in the past ten months, the organisers have had their money’s worth. I ask Hertz what winning the prize has meant.

“One of the great things about winning was how easily it integrated into the trajectory I was already following. It means I have more resources to follow up on the things that I probably would have done anyway, whether or not I got the money.

“It was through this I was able to secure doing the project at the National Science and Media Museum (A Shadow Feeling in which Hertz transformed the building itself into one vast instrument). I got to make an IMAX movie which was a really awesome experience.

“I keep using the word invaluable, but I really mean that because it has given me the opportunity to take the year to focus and do all the things I wanted to do.”

One particular early experiment in the unique space of the Howard Assembly Room utilised the singers Helen Évora and Whitaker Mills, four subwoofer speakers and a tapping machine (a device employed by acoustic engineers).

“I was trying to induce pulses in the room. These frequencies have a really interesting relationship to space and time, so the space you’re in, isn’t where you actually get these frequencies.

“I didn’t abandon the idea of producing (them), but there was some question in my mind that if I did build this huge sub-woofer to make the sounds, people in the room might not even be able to hear it. Instead it might be heard by someone else down the street. I was quite put off by the idea.”

It’s fair to say that Hertz’s interests and enthusiasms have tended increasingly in other directions. His residency at The Tetley has been characterised by a series of open workshops and a highly collaborative methodology. In April, Hertz will relinquish his DARE tenure with a performance of pieces old and new, the majority of which have never before been performed in Leeds.

“I’ve found it helpful to set up these milestone performances and installations and talks and things for myself because it helps generate more and more material. In some ways I have too much, but it’s better than to wake up in March and realise I’ve one piece of music.”

And does he feel artists and scienctists are any closer to understanding one another? “There is an interface that needs to happen,” says Hertz. “What art excels at is getting people to understand these bigger notions about time, about geography, about geology – to understand what we’re doing right now in a world that’s collapsing and crumbling and how we engineered that situation and how we can adapt our thinking to understand ways to grasp the whole problem.

“When people are really interested in that, then you can say here is the science to back that up. Here are the ways that science is talking about this and that information becomes a bit more accessible. It doesn’t have to do with translating those ideas. It has to do with approaching it with an artistic lens to clear space in people’s minds so they can think about things differently.

“I think essentially in a world where art and technology are fusing much more, art and science are becoming joined at the hip. It’s also important not to forget there are elements of each that are unique and worthwhile. Sometimes collaboration doesn’t mean two becoming one. It means everyone having an equal understanding and an equal input.”

Samuel Hertz : Immersion is at The Tetley, Wednesday 28th February at 6.00 pm. Details here. For more information about DARE, the pioneering collaboration between Opera North and the University of Leeds, click here.