Mozart’s portrayal of Don Giovanni draws upon a centuries’ old tradition of the archetypal libertine, driven not simply by lust but by the need to control and exert power. This is strikingly visualised in Opera North’s revival of a production first staged in 2012 which uses the transformation of various characters into puppets (literally or metaphorically) to show how Giovanni manipulates, seduces, deceives and coerces them to his will.  Fittingly rather than being cast down into the fires of hell in the penultimate scene, he is hoisted by a puppeteer’s strings.

This Giovanni is also a time traveller.  He escapes vengeful women or their husbands by leaping into a Tardis-like lift that conveys him to a different time and a host of potential new conquests.  There is a lot of comedy in da Ponte’s libretto, but it is very, very dark: we first meet Don Giovanni as he attempts to rape Donna Anna and then murders her father.  Despite the hugely enjoyable comedic moments, we are never in danger of applauding or excusing Giovanni. 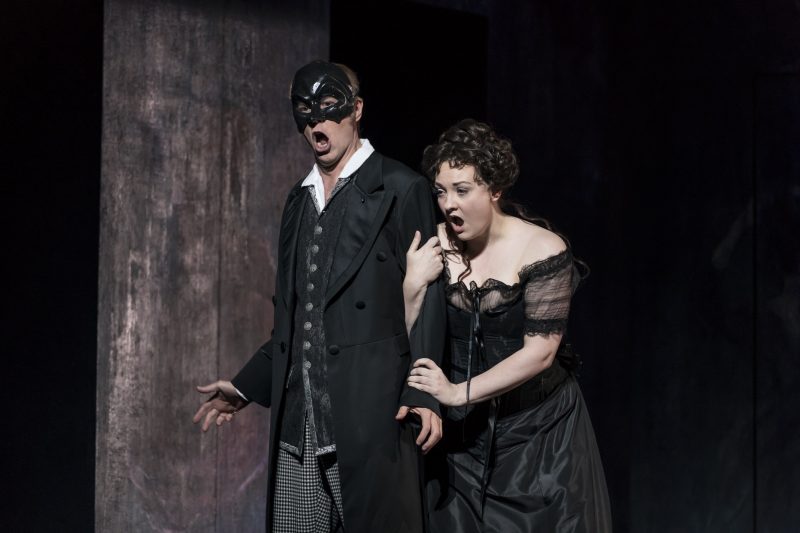 William Dazeley plays the Don with just the right kind of wolfish charm (just enough to understand how he gets away with it). His soft words and compliments are deployed with cynical precision.  He is a man for whom compassion and tenderness are merely masks he puts on to get what he wants and, having got it, he moves on without a second thought.  Dazeley chillingly portrays his arrogance, and his contempt for everyone but himself.

The role of Donna Elvira is a demanding one, vocally and dramatically.  She assumes so many personae – from avenging harridan to betrayed bride to woman in love – and we must believe her throughout.  All the more credit, therefore, to Lorna James, who stepped up from the Opera North chorus due to Elizabeth Atherton’s illness.  She brought humanity, poignancy and humour to the role, and sang it beautifully.

Donna Anna was splendid – it was Jennifer Davis’s Opera North debut, and she made the role her own.  The scene where she tells her fiancé that Giovanni assaulted and attempted to rape her, saying it out loud for the first time, risking disbelief or worse, is given immense emotional power.

Kathryn Rudge’s Zerlina was all girlish vivacity and a mix of innocence and knowingness.  She’s susceptible to flattery, but genuinely shocked when compliments turn to assault. Her performance of the aria late in Act 1, as she attempts to win Masetto over, was remarkable in so many ways.   Lyrically it’s decidedly disturbing (‘Beat me, beat me, my Masetto…’) and contemporary productions must decide how to play this: some bring out the violence in the words, but here Zerlina is figuratively and literally on top,  Masetto actually pinned to the floor with her skirts over his face.  She is clearly having a wonderful time.  (I suspect some liberties were taken in the translation shown in the surtitles at the Grand in order to bring out the double entendres.)  Playing the violence down in this way could have been a misstep, but Rudge and Ross McInroy as Masetto make it work.  It’s funny and rude and it allows Zerlina a moment of power to undermine Masetto’s macho posturing.

John Savournin’s wonderful comic timing and physical acting are perfect for Leporello.  His repugnance at, but also his dependence on Giovanni are played out across his face. He resists Giovanni, but finds himself mirroring the Don’s body language, literally in step with him and his machinations even whilst he looks for an escape route.

The ON orchestra kept the pace lively, interweaving the light with the dark (this is ‘dramma giocoso’, serious comedy, or comedy-drama).  The ominous overtones are there from the start of the overture, and are never far away, but are interwoven with dance tunes, lyrical arias and even quotes from other operas (including Mozart’s own Marriage of Figaro).

The staging may have been bonkers, but it worked marvellously.  Clever and effective use was made of windows to frame and give intimacy and to enable us to share Leporello’s perspective as he watches the Don in action. The time travel emphasises the inescapability of Giovanni’s fate – he could run through the centuries, but retribution would find him.  And it finds him utterly unrepentant. But the full title of the opera – The Immoral Man Punished, or Don Giovanni  – tells us from the start that he won’t get away with it.  And the final words assure us that: ‘This is the end which befalls evildoers. And in this life scoundrels always receive their just deserts!’.  Would it were so …  The production refrained from shoehorning in any explicit references to recent events (though the programme does explore these parallels),  but (as with ON’s Butterfly) the echoes were inescapable.  Unlike Butterfly, however, this time the women get their man, and that man gets his well-deserved comeuppance.

It’s a dark story, but an enormously enjoyable production, inventive and exhilarating.  Catch it on tour during March, in Salford, Nottingham and Newcastle.