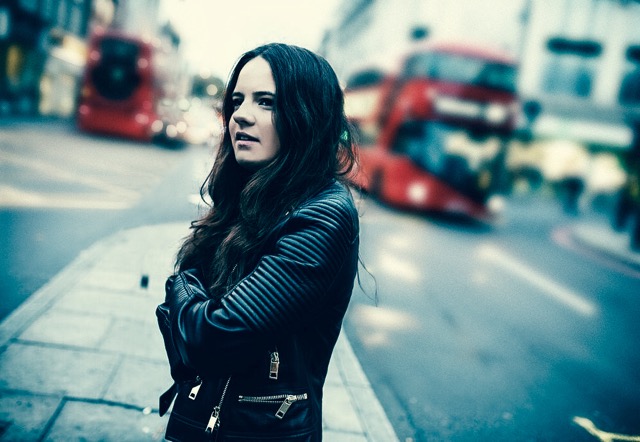 Known for her honest, soulful music, Mansfield singer-songwriter GEORGIE is on tour with Jake Bugg. She tells SAL WILCOX why girls with guitars should be taken more seriously…

What experiences or artists have had the biggest impact on your music?

There’s been loads! Obviously the gigs with Jake have been impactful. I went to see Sheryl Crow too about four years ago and remember watching thinking: ‘Ah right, so this is the level I gotta be.’ She just blew me away. She’s such a great songwriter and her stage craft was so inspiring. When I got home I ran upstairs, got the guitar out and was writing songs till 5 a.m.

You’re supporting Jake Bugg at the moment. How are you feeling? Is there anywhere in particular you’re looking forward to playing or anything you’re particularly excited about?

Yeah I’m feeling good and excited. I’ve just finished playing shows with him in Europe and it’s been amazing, so I’m hungry to tour again in the UK. Leeds is always good fun, so I’m happy to have been able to play there again. Glasgow Fruit Market looks like a beautiful venue. They’re all amazing venues, so I’m excited about that. All the gigs are in seated theatres, so they’ll be special shows.

You’ve just announced your new E.P. ‘Too much TV.’ What’s the inspiration behind it?

These three tracks I’m super proud of. I just wanted to release something with some grit. All the songs have something to say too, whether it be motivational or about society, but they all have something different to offer too.

Do you have a favourite track from the EP?

The title track ‘Too Much TV.’ It’s probably one of my favourite songs that I’ve written. I had a lot of fun writing and recording it. Lyrically I was really happy with it. I had a lot to say about so many things that day and I feel like I penned it down well into that song.

What makes a good musician? What traits do you admire in other artists?

Hard work and not giving in. It’s a blessed journey as it’s such a beautiful thing music. But that doesn’t mean it doesn’t have its ups and down, so you have to just keep at it.

Also any musician who has a voice. Someone who’s saying something that inspires. Some artists have an ability to make you want to live, love or be angry or go and create something. I think that makes the best artists.

There’s been a lot of discussion about women in music, from under-representation on festival line ups to the rejection of the ‘femme rock’ genre. How do you feel about the treatment of female musicians? Where do you think feminism belongs in the modern music industry?

Well, it definitely is still an issue. There are so many incredible women artists out there who could be and should be headlining or playing high on the bill at festivals. Same with the awards. It’s still very male dominated, for sure. I think that if you want to be a female musician who is known for being a real musician/songwriter, you have to earn your stripes. I think girls with guitars could be taken more seriously. I love what Ellie Roswell from Wolf Alice does. She’s strong and stands out.

How has your sound evolved over the years? Is there any kind of music you’d like to experiment with or anyone you’d like to work with?

It’s evolved a lot and is always evolving. I’ve been playing and gigging since I was fourteen – that’s almost 10 years! I’ve grown up and matured as a young women since then and that’s impacted on my sound. The places I’ve visited and the people I’ve met have given me a broader perspective which has changed the way I think creatively.

I never really think about evolving, it kind of just happens. I write songs and one day it could be a pop tune, but then I’ll end up writing an indie song afterwards. There’s so many genres I’d love to experiment with. I love Chance the Rapper. Working with him would be a dream.

If you could swap places with any musician in any band which would you choose and why?

Probably Fleetwood Mac, but I wouldn’t want to replace any of them. I’m not worthy! Maybe I could be the sixth member?

What’s on the horizon for you? What do you want to achieve in 2018?

Achieve everything I can, really! I want to put my stamp out there with my music. Essentially, I just want to play as many shows as I can, release more music and hopefully make people happy.

GEORGIE appears at Live at Leeds on 5th May. Details here