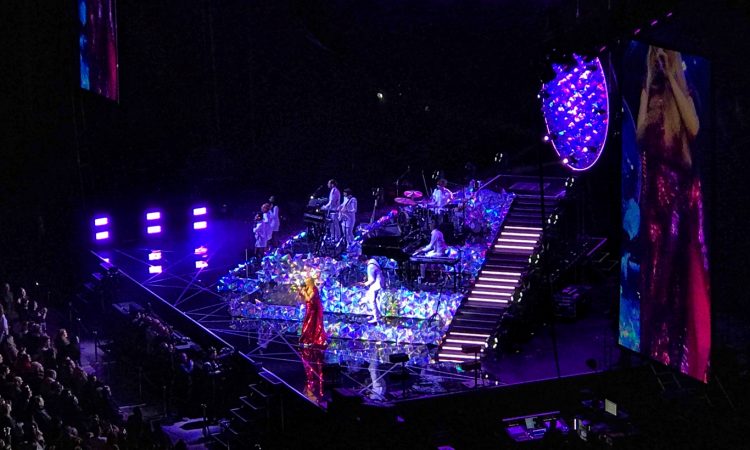 There were calls for BRIT Award Winner PALOMA FAITH’s performance at First Direct Arena to be cancelled due to the weather, but OTIS ROBINSON discovers you gotta have Faith…

Defying her mother’s wishes to sing “nice songs”, Paloma Faith made a powerful return to the stage on Friday with a politically imbued tour that meshed dark personal experience with the current societal climate.

Faith announces her presence by rising from a crystallised, kaleidoscopic platform, belting out her recent hit singles before opening up as if we were old friends sharing a cup of tea. Preluding the overt honesty that is woven through the performance, Faith says she’s nervous: earlier she received a barrage of “hate” messages on Twitter for not cancelling due to the icy weather of the Beast from the East, but one look around the stadium and it is clear not a single person missed the opportunity to hear the BRIT Award winner’s sultry, powerful vocals.

The show, like her new album The Architect, does not “preach” politics at her audience,  announces Faith and cites her wish to make a “not rant-y” record about “world stuff.” Each performance could easily have been disguised as a love song were it not prefaced by anecdotes from the singer’s life, explaining the societal inspiration behind it. Standouts included the empowering, anthemic performance of My Body, in which Faith expresses her wish to love her body after the birth of her first child by caesarean, even in the face of fickle tabloid press interest.

Faith delves into harrowing topics such as racial profiling, the cruel state of the world and her belief that we may trickle towards World War Three if we don’t start to change things. Faith also took the opportunity to send a message to US President, Donald Trump: “What kind of a man gets a thrill from the life he’s taken?” Though the set sprints from US politics to Brexit-based ballads, the show does offer something easier on the palate by diverging into sunnier pastures. Faith included a performance of her new, upbeat chart-topper, Lullaby, which features the British DJ Sigala.

Despite her concerned, motherly Hackney charm, Faith’s band deserves a mention: not a member of the audience left the arena ungrateful for the vocal abilities of her infectious backing singers, who danced with the star like friends at a party. The youthful yet wise charm of Faith once again shone through; the singer, band and audience reunited, away from the harsh weather outside, discussing life, political issues and hope for the future.