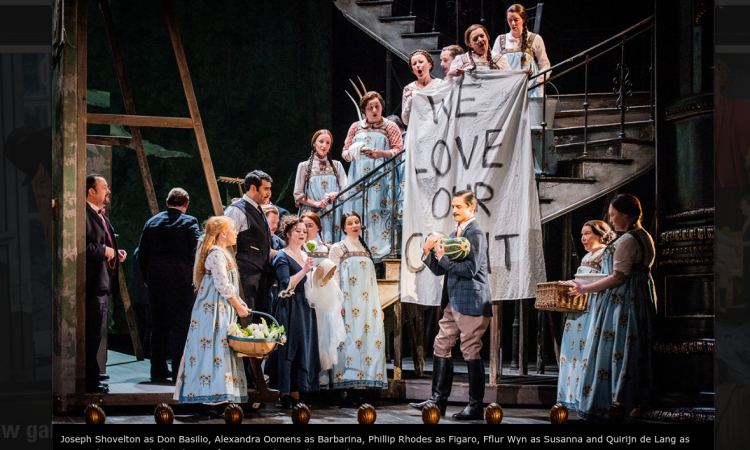 In the February edition of Opera magazine, the baritone John Rawnsley, looking back to the 1970s, writes that what made him as a singer was belonging to companies such as English National Opera, Opera North and Glyndebourne. This, he says, in the international opera world of today, has been thrown away. Coincidentally a letter writer in the same issue complains that there is no company spirit at Covent Garden now: when he opens his programme, he encounters a list of unfamiliar names. He adds, “To get a real sense of company ensemble, listen to the live Marriage of Figaro at Sadler’s Wells in 1965 under Charles Mackerras.”

Opera North has no company principals and, sadly, there is no Mackerras today, but these references illuminate one of the reasons why the company’s Marriage of Figaro is such an exhilarating experience. Street Scene in the same season is a company show, with Opera North choristers in everything from lead roles to walk-ons, but Figaro is a company ensemble piece in a less obvious way: the Chorus figures only in small parts, but the principals are singers who have returned often to Leeds and have worked together (and with director Jo Davies) on a range of operas and musicals. The result is the opposite of stand and deliver opera singing: clever, true and funny performances in the greatest of ensemble operas, with no compromising of vocal standards.

Figaro has the advantage of being based on a fine play by Beaumarchais adapted by a wily genius of a librettist, Lorenzo da Ponte (and in this case translated by the equally wily Jeremy Sams) – all Mozart had to do was cloak the plot in wonderful music to reflect the lies, the loves, the fun and the scheming self-interest of eight sharply delineated characters. No problem: the opera magically connects the frivolous with the sublime, the extended Act 2 finale a stunning example of linking character and incident in a seamless flow of melody.

The plot is a good, old-fashioned farce that keeps bumping into serious emotion. Figaro, servant to Count Almaviva, is about to marry the Countess’ maid, Susanna. The problems they face are varied. There are two males in the palace pursuing every female in sight: the Count seeks his droit de seigneur with Susanna, while the hormonal teenage page, Cherubino, is romantically devoted to Susanna and the Countess and matched with Barbarina, another target of the Count. Meanwhile Doctor Bartolo and Marcellina are trying to hold Figaro to a contract by which he marries Marcellina if he is unable to pay a debt. All is resolved by way of skilful scheming and unlikely coincidence, but the depth of emotional questioning takes us way beyond farce.

Leslie Travers’ set – initially more behind the scenes than front-stage and exhibiting a torn and fading grandeur – is a warning against taking anything too seriously as the singers scurry to their places during the overture and Jo Davies plunges us into the world of farce, with plenty of doors and characters just the right side of caricature.

Quirijn de Lang, returning to the part of the Count from this production’s initial 2015 run, alternates the smooth-tongued seducer with the manic outbursts of a priapic Basil Fawlty. The Countess, regretting the changes of the passing of years, lies at the serious heart of the opera. Maire Flavin gives her great aria, “Dove sono”, all the poignancy and delicacy it needs, but is less passive than many in the role, sparky in confrontation with her husband, sly in her affection for Cherubino and her plotting with Susanna.

Phillip Rhodes belongs to the steadily aspirant school of Figaros, with none of the revolutionary fervour of Beaumarchais’ original tacked on to Mozart’s more apolitical figure. Urbane and witty, with a convincing capacity for revenge, his polished baritone meshes well with Fflur Wyn’s sparkling soprano. Her Susanna is, as it should be, all animation, energy and shrewd judgement. Animation and energy are there in plenty (not much shrewdness!) in Heather Lowe’s whirlwind of a Cherubino, mischievously irritating, soulfully romantic and very funny.

Conductor Antony Hermus secures beautifully detailed playing from the orchestra and looks after the witty and playful continuo himself.