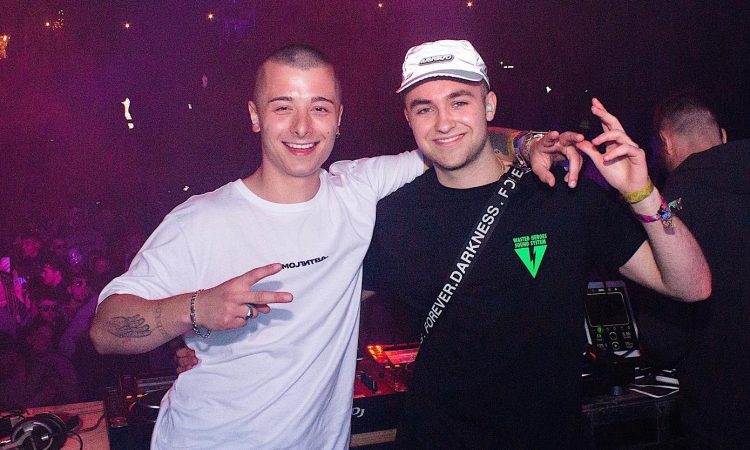 ‘Bloody kids today, no respect. Being fucking splendid, churning out masterpieces all over the damn place.’

Some might think it strange that the night after my wife’s wake I was out in Leeds, at SubDub, off my tits, dancing to urban EDM and dub until five in the morning. I remember it well, Vital Techniques and Mc Pean blew me away. ‘I’ve got to see them again.’ I had to see them again.

I still haven’t. I could’ve, I should’ve. A few times after Boombox Circus I’ve cursed myself, ‘You’ve missed them AGAIN…. Y’ DICK, what the fuck?’ Problem was, I couldn’t escape the bar room house, deep house and get to the glorious darker rooms downstairs, where my passions lay.

Those pumping 2 and 4 accent rhythms were childhood, a comfort blanket, a safe place where — anticipating the beat — I couldn’t think, separated, for those rushing hours of moments, from grief.

I’ve also placed young Leeds dance duo Prospa alongside VT&MCPean in the ‘got to see’ category cos they’re very special. Mindst you, by the time I’m back out in sweaty clubs Prospa tickets will probably be ‘not paying that’ level.

Me and Vicky loved to dance, we started dancing together at youth clubs 40-odd years ago. She died the day after her 51st birthday and dancing became my brief relief from that hideous howl; the paralysing, gut-wrenching howl of pure, brutal grief — my escape from insanity.

Vicky and me didn’t give a fuck if we were the only ones on the Phono dance floor, early doors, as the other posers looked on disapprovingly, and we lost ourselves in the space. We loved ‘Procession’, we had to dance.

Just as we danced alone to Soft Cell’s ‘Memorabilia’, at The Staging Post in Whinmoor. Marc Almond was in and people’s working class, bitching, fake-cool snobbery wouldn’t admit to loving his tune in front of him. Vicky thought this behaviour was awful and dragged me to the dance. We had it big, ‘Memorabilia’ was a classic, just the two of us and an empty floor; we pounded that sacred space.

When I first played Prospa I jumped straight out of my three hour bath, ran dripping downstairs, plugged them into my big speakers, turned it up to 30 and danced. It gave me the same excitement as ‘Calamity Crush’ (Foetus – Art – Terrorism) when I was an older youth, getting ready for the Warehouse, or Art of Noise.

Maybe they won’t know it but Prospa are evolutionarily related to all these things, just as Bicep are to Kraftwerk. Just as Art of Noise and Foetus are to Eno, Kraftwerk, early Human League (Being Boiled etc.), Devo, Bowie, Cabaret Voltaire or Fad Gadget in Leeds.

Music evolves, influences and changes. I love the changing, it teases me into chasing, like a flirty girl in the playground.

Prospa are proper now but they can return me to a beautiful past. They are thoroughly modern but the edgy, complex 2020 evolution of one of my musical childhoods and I love them. They can return me to clubs of my youth, that odd mix of the high-energy gay disco and the cutting edge European (Kraftwerk) electronica emanating from the Bowie/Roxy clubs that met at Leeds clubs like the Warehouse or Primo’s that, for me, was the immediate precursor of the house scene.

Marc Almond’s sets at Primo’s (before Soft Cell had broken big — I think) were beautiful to behold and even better to dance to; especially tripping in the big lights and pounding volume. Primo’s was based in what became the Back To Basics building on Lower Briggate.

There’s a snobbery, from people who misunderstand it, towards dance music, especially 4 to the floor stuff, thought of as simplistic, nothing to it. ‘I could knock that off in an afternoon’ — bollocks y’ could.

The first thing that hit me about Prospa is their musicality. They skillfully interweave, build, drop and play off riffs in a 2020 way, a young way, that people who dismiss or misunderstand the genre can barely hear, never mind reproduce or mimic. Where they are, their relationship with software, modern music and decades of music they’ll be barely aware of — but has seeped into their brains since the womb — means they pervert, chop, stutter and twist riffs like da Vinci playing light on a canvas.

Their mixes are palettes of subtle intricacy, patience, precision, imagination, surprise and journey.

One (or both) of them is a serious, dog’s bollocks drummer (like that lad Joe from Multivac), there’s shifting rhythmical complexity and proper ‘feel’, ‘groove’ from top to bottom, in every sound. Someone’s started young, talented and then did some hard labour.

Championed by Annie Mac, Prospa are breaking big, pre lockdown, repeatedly guesting on her show and (getting ready to go out) Friday night Radio 1. Doing the Brits after-show, jetting from Barcelona to the Dominican Republic, from Amsterdam to the US, from Leeds to Canada and back again. Successful musicians could travel light in early 2020, no juggernauts required.

They’ve even had a couple of tracks on Radio One’s playlist, that’s almost mainstream. Something with a bit of edge (outside vocal MCs) is breaking through, there must be a higher being.

Annie Mac awarded their tune ‘Prayer’ her ‘Hottest Record In The World’ tag but she was wrong, their tracks ‘Back To The Motherland’, ‘Get That’, ‘Information’, ‘Evacuate’ (and more) are way hotter. As are the more recent ‘Feel It’, ‘The One’ and ‘Never Let Me Go’.

Being shallow, fluffy and fickle, I crave shiny new things; sounds, sonics and effects that are new to my ears. It’s a flashback to a tripping teenager flying through the totally foreign mindscape of the future with ‘Film Theme’ or ‘Life In A Day’ (Simple Minds) or ‘Permafrost’ guitar solo (Magazine), Bowie’s ‘What In The World’, ‘Weeping Wall’ (the future) recorded the same year that ‘Bohemian Rhapsody’ (the past) was number one.

If I were to give them any guidance (which I certainly wouldn’t, for fear of breaking their magic spell producing music bordering on genius) it would be to listen out for fresh sounds. Maybe check out one of Bass BC’s legendary Eclectic Urban sets to hear what he plays alongside them or SoDown’s clarity of sonics in stuff like ‘Swerve’, ‘Eskimo’, ‘Kill Em’, ‘Minds Rising Remix’. But I suspect they’d just raise their eyebrows, ‘And?’

Who the fuck am I? They are sonic artists of the highest calibre. Painting masterpieces all over the damn place and maybe there’s a purity of sound, an authenticity that I’m too old to understand.

Thing about masterpieces is that you’re supposed to work up to them, not churn them out in your late teens/early twenties like Prospa. I’m sure people who know more than me about art will pull up the exceptions… ‘Aubrey Beardsley was sketching perfect curves, aged 14,’ but, trust me, it’s not normal, they’re freaks.

Now I know some of you want to live in the past and that’s fine, it’s comfy there. You ‘it’s just a bloody noise’ old folk are not supposed to like what us kids listen to. But turn it up loud and dance to ‘Back To The Motherland’ or ‘Get That’ three times and you might suddenly find it comfier than you thought.