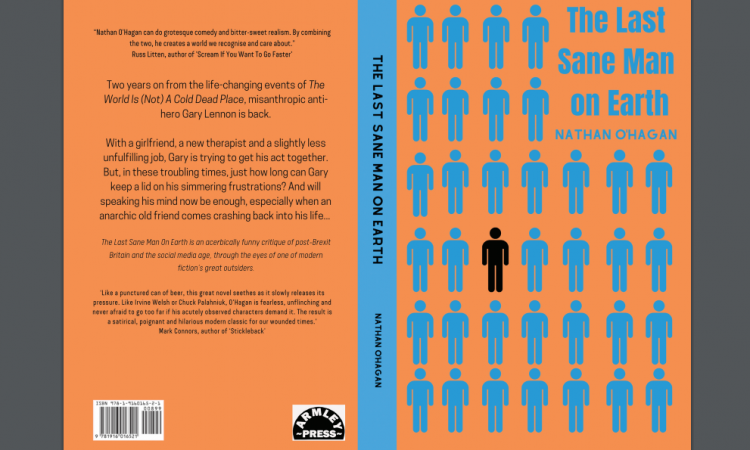 In this sequel to The World is (Not) a Cold Dead Place, Nathan O’Hagan brings us up to speed in the world of Gary, a hell of a did-the-glass-even-have-anything-in-it-to-begin-with kind of guy. In The Last Sane Man on Earth, Gary takes us on the next leg of his journey towards something resembling a halfway functioning modern male and as far as sequels go, this one marginally outshines the original. It’s more eventful than The World is (Not) a Cold Dead Place, it’s grim as hell and it’s ripe with sharply observational dark humour.

O’Hagan writes characters that have all the charm of a public urinal. The folk writing in to complain about slip ups on BBC shows had better steer clear of this unless they want to incinerate their sensitive eyeballs and delicate moral standing. But characters don’t need to be charming to be engaging, and in that respect O’Hagan definitely writes compelling characters who intrigue in their own way, most often with grotesque wit and sardonic one liners taking the place of anything more genial.

Gary’s demons, conditions and compulsions are still intact and despite having progressed enough to be co-habiting with Jenny and capable of minuscule departures from his comfort zone, Gary is still very much the angry fish far, far from water. He’s got a new job (complete with new authority figures to loathe) and a new therapist, but safely retains his tendency to erupt an avalanche of foul mouthed lava over anyone caught in the vicinity of his latest melt-down.

I say the sequel marginally outshines the debut because O’Hagan offers a better ratio of focus between Gary’s internal stream of consciousness and external events and characters here. The anarchic deviant Buckle is given generous scope to guide Gary’s life in this lively second installment. As heathenish as ever, he offers a whole new route to relief from mundane normality for Gary – no need to puke directly into the mouth of an insufferable boss this time, there’s a new calling in what ultimately becomes a very unique maverick partnership. It’s a shit-show with a kind of oddly undeniable justice involved and it’s certainly an unexpected direction for our self-sanitised anti-hero.

The modern male psyche doesn’t receive any compliments either; from flaccid ineffectual types to manic oversexed Neanderthals to alt-right monsters to hipsters too mesmerised by their empty mantras to be anything but laughable, the whole lot are stinkers. But in all fairness the female psyche fairs only marginally better by being peripheral. Jenny doesn’t take prisoners and shows sensitivity but without any backstory or sufficient substance to her own story, it’s just incredibly puzzling to find her putting up with this impossible man. The therapist somehow loses momentum and the mother is a weepy, hopeless woman by all accounts. They’re a flailing, troubled bunch but they do entertain.

And in amongst all the heavy gratuitous expletives and generous descriptions of various bodily fluids from chapter to chapter, there’s an awful lot of great observational humour and relatable home truths. Who hasn’t had a bout of self-destructive behaviour or imposter syndrome take hold? Or loathed a day at work beyond words of any civility? Or inexplicably wanted a shower of shite to land on an over-zealous stranger? Honestly?

But Gary is the very worst of us on our most pedantic, painfully nihilistic days. His outrageous outpourings of venom invite an interesting blend of vicarious thrill and appalled derision while his brutal demolition of everything from modern hipster and tech culture to the latest political grenades are also very much on the pulse for such a wilfully detached character.

All in all, O’Hagan offers no heroes here, just a grim yet often comic study of messy human entanglements relayed with an unapologetic gritty realism. If you like your novels modern, fiery and wayward with plenty of colourful expression and no pomp of any kind, The Last Sane Man on Earth might be just the ticket.