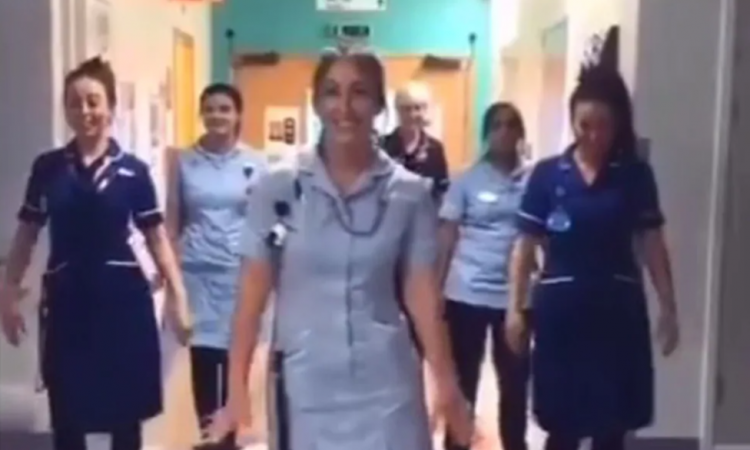 A week is a long time in politics, and the fluctuating attitudes towards the NHS during the ever-evolving coronavirus crisis has been as great an indicator of that as anything.

No sooner had people put up their rainbows and ‘NHS Heroes’ signs in their windows in support of those working on the frontline, than some were finding ways to tear the NHS apart and recast healthcare workers as the villains of the piece. Matt Hancock told us we were being far too wasteful when trying to protect ourselves and using far too much PPE, and the trust I work at was given unwanted prominence on Katie Hopkins’ Twitter timeline when she posted footage of some of our staff gathering outside A&E and, admittedly, standing too close to each other while joining in the weekly clap for carers.

In the time it takes for Alex Jones to decide whether or not he would eat his neighbours, we went from being The Avengers, to being Ultron.

Criticism of the NHS is not even remotely new, and it should probably come as no surprise to see it coming under attack from certain quarters at a time when public appreciation of it seemed to be hitting new heights.

Discontent with the lockdown has been steadily growing, with people citing all sorts of reasons, some quite reasonable, some utterly crackpot, why restrictions should be eased, and discrediting the NHS seems to have become a useful tool for those seeking to discredit the government’s lockdown policy as a whole.

An app that was previously largely the preserve of the under twenty fives, TikTok has become omnipresent since lockdown began. Just about every middle class family has recorded their own embarrassing video, usually featuring at least one bemused, out-of-synch – in every respect – parent who probably hadn’t heard of the app until a few minutes before. But it’s amongst NHS workers that the app seems to have gained most prominence, and a lot of people really aren’t happy about it.

Over the last few weeks, we’ve seen a growing number of staff dancing in a variety of settings, from nurses on wards, paramedics dancing in or around their ambulance and, in a bizarre twist that I don’t think any of us saw coming, in one case performing a haka. This particular video provoked a particularly outraged reaction when those involved were accused not just of spending time they could have been caring for patients making a pointless video, but also of cultural appropriation, prompting them to take the clip down and issue an apology.

I’m yet to witness any of my colleagues trying to ride this particular wave, and personally, I’d rather do a 24 hour shift on a covid ward wearing no PPE than take part in any sort of ‘wacky’ video, and my somewhat curmudgeonly reputation precedes me to a sufficient degree that I would probably never be asked to participate in one. But perhaps it’s time for anyone planning to get in on a tiring act to think twice.

If you’ve been dealing non-stop with the worse that the covid-19 outbreak has caused, then you’re more than entitled to spend a few minutes doing something, anything to keep yourself sane and, in and of itself, making a daft video of you and your mates trying to emulate the Is This The Way To Amarillo video during some down time in your shift is completely benign.

NHS staff are dealing with a level of patient deaths that we’ve never experienced before, so any chance for a little levity shouldn’t be begrudged. I also know from personal experience that at the moment, many staff are being redeployed from other departments to help with the covid effort, very much out of their professional comfort zones, and away from their usual teams. Some have claimed that making these videos has helped them to get to know their new colleagues better and keep their morale up at what is proving to be an extremely challenging time.

But public perception is important here, and if healthcare staff continue this trend, they run the risk of appearing tone deaf to the mood of the nation, which, by and large, seems pretty unambiguous on this issue. Not everybody reacting unfavourably to these videos is a hard-right killjoy, one of the most common reactions seems to be from people who don’t begrudge the videos themselves, but question the need to make them public, rather than keeping them to private WhatsApp or Facebook groups.

The idea that any nurse, doctor or healthcare assistance would abandon a patient so they can participate in a TikTok video, as has been suggested by some, is patently ludicrous. Anyone taking part will either be on a break, or filming before or at the end of their shift. They may be working somewhere that isn’t directly involved in the covid efforts, such as one of the few outpatients clinics not to have been temporarily shut down, or maybe on a ward or unit that is on standby to deal with any overflow. But any member of the public seeing one of these videos can’t be expected to know that, and can’t be expected, even at the best of times, to consider the many variable factors that meant it was in no way irresponsible or negligent for staff to be filming themselves.

If you’ve got a family member on a covid ward, or indeed on any ward, seeing key workers dancing to The Weekend’s Blinding Lights isn’t likely to give you a warm fuzzy feeling towards the staff involved.

There’s nothing sinister at play in these videos, beyond their inherent naffness. The only way they’re putting people at any chance of harm is that anyone viewing them may cringe so hard they give themselves a hernia.

The need for clicks, likes and shares has become all pervading. It can often feel like nobody can just ‘do’ something anymore, whether it’s going for a pint, making a sandwich, having a moment of intimacy with your family, or dancing around with your work mates, it isn’t enough to experience it yourself, it only has validity if everyone else experiences it with you. This is of course all indicative of the wider desperation for social media likes and views and a desperate desire to go viral, even in the midst of an actual virus.

Nobody involved in any of these videos has really done anything intrinsically wrong, but the day you give the likes of David Vance something to use against you, it really is time to have a think about what you’re doing.

There’s enough people out there gunning for the NHS right now, the last thing we ought to be doing is handing them the ammo.