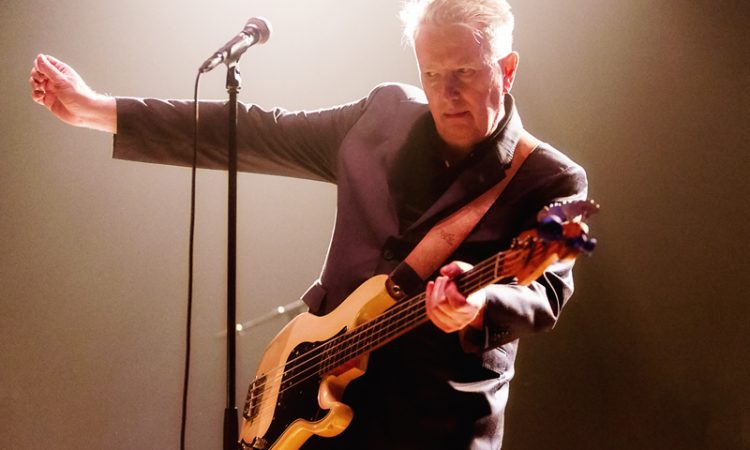 On the 40th anniversary of TRB’s debut album, musician and radio broadcaster TOM ROBINSON talks to NEIL MUDD about rock n roll, the nature of freedom and a rather unexpected musical hero…

I always liked Tom Robinson. With his flowing locks, precise diction and used car salesman overcoat, he was never really what you would describe as a punk, but he came across as a decent sort.

In any case, few bands riding on the Sex Pistols’ coat-tails back in 1977 were what you would call punk – which was kind of the point, maaan.

“My music career was based on my taste in music and my abilities in music,” Robinson tells me when we chat about TRB’s debut album Power in the Darkness which he will be performing in its entirety later this month at Brudenell Social Club.

“I couldn’t play jazz or any of that stuff,” he says, recalling how his moment in the punk spotlight came about, “and I certainly couldn’t pull off punk the way Joe Strummer did – even though he was a similar age to me – it just wouldn’t have been believable. I wanted to make music that worked for me and have a career in it.”

The musician already had a career of sorts in the mid-seventies as a member of Café Society, an acoustic trio who were produced by Ray Davies and whose only album sold less than 600 copies.

Then in 1976, Robinson saw the Sex Pistols and the (“modestly-christened”) Tom Robinson Band followed soon after.

“I realised that whatever the next thing was, it wasn’t going to be a harmony trio,” he laughs, “so I put a band together in the only way I knew how. Having grown up in the sixties, I was rooted in The Doors and Stones – those early bands which we all pretended we weren’t into at the time – and came at it as a pretty much straight down the line rock band.”

Feted by NME’s Julie Burchill, who declared all other rock bands were ‘just wanking into the wind,’ TRB signed to EMI in 1977 and had a top five hit with the suspiciously bluesy 2-4-6-8 Motorway. By the time Power in the Darkness came out in 1978, Robinson was a regular fixture in the music press, using his new-minted rock musician status to stand up and be counted.

“Once you’ve got an audience who like the songs and like what you’re doing then you can also use that to help the things you care about. But I think if people hadn’t liked the music, they wouldn’t have given a toss what my politics were.”

Robinson was openly gay at a time when “queer-bashing” was something of a national past time. It took some guts, even allowing for punk’s embrace of society’s outsiders.

TRB released Glad to be Gay – which, like The Special AKA’s Free Nelson Mandela, hitched a hard-hitting political message to an insistently catchy tune – a song adopted by both Amnesty and the Pride movement, and still rolled out when occasion demands.

“In the sixties, the only tiny glimmer of hope was You’ve Got to Hide Your Love Away by The Beatles, which at the time I thought almost sounds like my situation, except the pronouns are wrong. It wasn’t really until David Bowie that I heard songs which related to my life. Here was somebody who was emotionally attracted towards the same sex and a keen, keen music fan.”

Robinson was equally candid about his struggles with mental health and could be found railing against the rise of the Far Right or taking journalists and politicians to task in the media.

A prominent supporter of the Rock Against Racism movement, TRB headlined its inaugural gig at London’s Victoria Park, non-plussing The Clash who refused to leave the stage at the end of their set.

Robinson continues to champion causes, despite the flack it inevitably incurs. “You can’t have freedom for one minority interest group and everybody else can go fuck themselves: as long as women are not getting the same pay as men, or not getting the same opportunities as men, or are subjected to harassment and violence in a way that men aren’t; for as long as people of colour are treated as second class citizens and stopped and searched on the street; so long as the prison population has a completely disproportionate Black and Afro Caribbean and Asian population, then you’re not in a free society and you can’t hope for freedom for gay men – or bisexual men in my case – to live their lives freely, while other people are not.”

Power in the Darkness sounds remarkably urgent and fresh forty years on, thanks in part to a no-nonsense job from veteran producer Chris Thomas who had worked with the Sex Pistols on Never Mind the Bollocks. The album’s nods to Bruce Springsteen (Up Against The Wall), Ian Dury (Grey Cortina) and Steely Dan (Too Good To Be True) passed me by as a teenager, but the bitterness of Robinson’s lyrics was palpable and curiously English in character even back then.

“It felt like the end of the world to be honest,” he says of those pre-Thatcherite times. “We had a discredited Labour government falling to bits. We had bodies not being buried, rubbish not being collected, three day weeks and electricity cuts, race rioting in Notting Hill Gate and Brixton, the National Front marching through Lewisham.”

“It really felt like if we made thirty we’d be really fucking lucky. The lyrics seemed…” The voice on the other end of the line trails off. “Well, the NME’s headline for its review of that album was Paranoia in the Darkness,” he laughs.

Over a drum riff borrowed from Lady Marmalade of all places, this supposed monomania is most pungently felt in the album’s title song with its venomous spoken word rant.

“Forty years ago I was a young man in my twenties impersonating an elderly, out of touch, politically-minded chap railing against the political times and looking back to when the values were different,” Robinson explains.

“Of course now, forty years on, that elderly politically-minded chap, out of touch with what else is going on around him, is me. That’s me railing against the political times I find myself in, harking back to the times when values of community, equality and justice had some (meaning).”

Reviewing Power in the Darkness last year at the 100 Club, one critic complained that Robinson persisted in holding the same extreme political views: “Since when did it become politically extreme to believe in fairness and equality of opportunity?”

Robinson’s last visit to Brudenell was three years ago with TV Smith. “We had a lovely gig,” the musician says. “I’m sure a lot of old punks came because it was TV as well, but Nathan runs such a great ship there. I can’t wait to get back.” If the live album reboot from last year is anything to go by, it promises to be very special indeed.

These days Robinson rarely plays live, having settled into work as a studio musician (to date he has released fourteen albums under his own name) and radio broadcaster. He modestly brushes off Power in the Darkness as “his fifteen minutes of fame” with a hilarious story of mistaken identity involving Eddy Grant.

I mention to him that the TRB fist stencil, which was included with initial quantities of the album, gave the band an afterlife far beyond those allotted fifteen minutes when someone spray painted a trail of them across Leeds.

Our time nearly up, I ask him about Alexis Korner, the influential blues guitarist and radio broadcaster who died in 1984. Robinson met him as a teenager. Was I right in thinking he became something of a mentor?

“Absolutely. God, Alexis was such a lovely, generous, brilliant man who suffered from a crippling lack of self-confidence,” Robinson says. “I went off the rails when I was 16 and ended up in a therapeutic community for disturbed adolescents called Finchden Manor (in Kent).”

“Alexis was an old boy and came down with his family for a visit. He played an acoustic concert in the principal’s study. There was about thirty of us crammed into this living room and Alexis was this kind of grizzled forty year old in a floral shirt. He just looked so cool. Like a rock n roll gypsy.”

As he packed up to leave, Robinson and some of his friends approached Korner. They were in a band, they told him, and using a plastic tape recorder mic taped to a broom handle. Could he buy them a proper microphone when he returned to London? Taking the five pounds they had cobbled together, the older musician said he would see what he could do.

Two weeks later, a brand new Shure Unidyne 3 arrived in the post, “worth about fifty quid!” says Robinson. “It transformed everything because it rejected feedback. We could crank the sound way up and hear the vocals above whatever din we were all making. What a generous thing to do – and to somehow know that was exactly the right gift to make…”

“Just seeing Alexis stand up and sing the blues – sing about wicked women, racist policeman, injustice, poverty, all the things that the blues are about – was amazing.

“I was eighteen and I had clapped eyes on the thing I wanted to be. Then he became a broadcaster on Radio 1. It transformed my music making, and in the end it has transformed my broadcasting.”

Robinson’s excellent documentary for Radio 2 on the life and music of Alexis Korner can be found here.