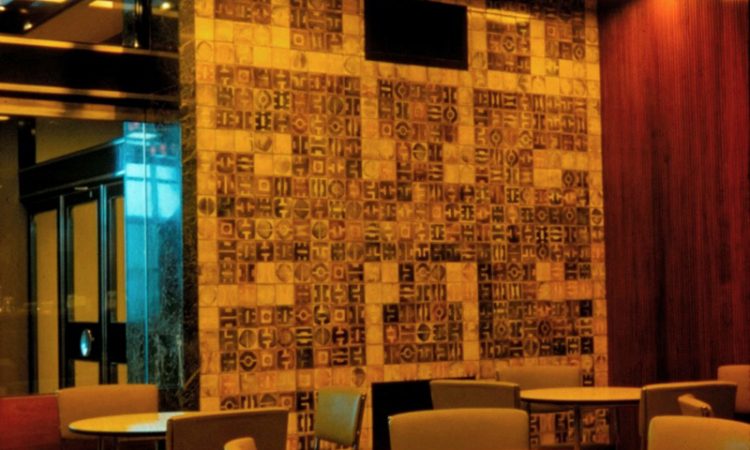 It’s the gift that keeps on giving. Hull’s threatened Skyline department store has yielded a new treasure in the form of a sponge printed mural by artist Alan Boyson, who died last month.

Two important examples of the Marple ceramicist’s distinctive mosaic murals at the former Co-operative Society flagship store (Three Ships and Fishes) are already the subject of a vigorous campaign to save them.

Now the possibility is raised of a third mural on the premises just as the Council announces its final decision about the fate of Boyson’s original artworks.

The discovery by leading Boyson authority Christopher Marsden, came as principal cinematography got underway for Ships in the Sky, Hull-born Esther Johnson’s new film and oral history project about the murals.

Among these original architectural drawings and photographs, Marsden uncovered a Kodachrome slide of a Boyson work which the architect did not recognise. Marsden realised the slide’s number (9) placed it in a sequence of other Hull photographs.

The mural’s location was subsequently identified in the bar area of the former Skyline Ballroom using the original architectural drawings.

Completed in March 1963, the mural is decorated with Boyson’s signature graphic style says Marsden, who has catalogued and written extensively about the artist.

“Similar sponge print work was done for new buildings in Salford, Walsall and Wolverhampton, but they are all either lost or severely damaged.

“The installation (is) a coherent design and, if any significant part of it survives, it will be the most existing complete sponge print tile work of Boyson’s.”

“Finding and rescuing it would be a fitting tribute to a fantastic artist,” says Johnson, who spoke to theCV about Ships in the Sky earlier this month.

“It would be wonderful to film the murals before demolition starts. Having a record of them in situ before everything changes would be an important part of my documentary (and) I’m in talks with the Council to see if we can make that happen.”

The new information has been passed on to Hull City Council, and shared with clients and contractors in the hope that the mural still exists.

Marsden has previously provided architectural drawings and other materials to aid with mural preservation work, as well as contributing extensively to Hull Heritage Action group and its campaign to save Boyson’s works.

SAVE THE DATE | We are thrilled to announce that Esther Johnson and Leigh Bird (of Save Hull’s BHS/Co-op Murals campaign) will join us on Wednesday 24th October to talk about Alan Boyson and the Hull murals (including a cheeky link to Leeds) at an inaugural collaborative venture with Colours May Vary and the Modernist Society. Details will be announced shortly, but it is going to be absolutely brilliant…