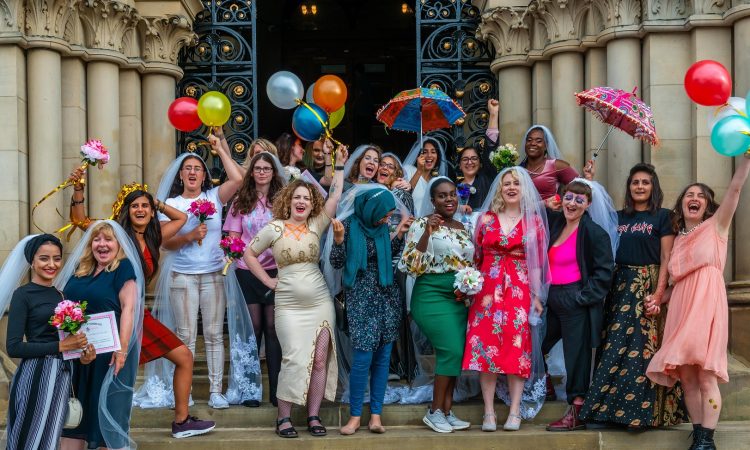 RADICAL ACTS from COMMON WEALTH THEATRE is a celebration of convention-shattering actions that women and girls have taken to change their lives over the years. RICHARD HORSMAN wasn’t allowed to be a passive observer.

Radical Acts is not the kind of event where a viewer, or reviewer, can sit quietly at the back. It’s an action, not a performance. The audience is very much part of things from the moment an urgent bell summons us to the grand and once-hidden dining room of the Bradford Club.

The production is site specific. Quite what the wool barons of old who set up the Bradford Club as their men-only sanctuary in the heart of the city would make of it, happening in their exclusive space just yards from the Wool Exchange that put a price on their fortunes, is a moot point.

The same goes for the ecstatic Young Conservatives who thronged the club as their base on election nights long gone, toasting Margaret Thatcher’s successes in the 70s and 80s.

The venue was chosen for its associations, and yes, Lady Thatcher’s name crops up many times .. in sign language. Names are personal in sign language, we’re told, to differentiate between individuals with the same given name. Maggie’s given sign doesn’t look very complimentary.

As house staff bid us to take our seats at ten candlelit tables, positioned as if for a formal dinner, white-dressed figures stand frozen by each one, identified by a card that could be an extract from a textbook, or the inscription on a statue, or their epitaph.

Only two of the ten women are professional actors. The rest became involved in the project through a weekly discussion group. The blurring of real life and theatre has begun. Each tells a story, or sings it, or signs it. Is it their own life story, or a script? It’s both.

The piece evolved from discussions over food, and food in the form of ‘radical snacks’ is part of the action. There’s a flow of energy in the room as discussions are replicated with performers facilitating conversations around each table before the centre of attention moves on to another story, and another revelation.

As the evening progresses the venue, and the audience, become increasingly central to the action.

Radical Acts is a work that defies genre. Spoken word, movement, music in English and Arabic all have a role. It’s an installation and it’s a community action. It’s a continual work in progress; the company plan a similar project with participants recruited in South Wales.

The Bradford version resonates with real voices. The cultural and geographical references are authentic, because many are delivered in the first person from those who lived the experience.

As the makers themselves describe it, “All movement in the play, every action, gesture is historical and all text performed is contemporary, from personal experiences of the radical for women today. Some moments are very intimate and others transformative and fantastical.”.

I met Common Wealth’s co-founder and artistic director Rhiannon White in the vaulted billiard room of the Bradford Club just an hour ahead of Friday’s performance. She told me how the work has evolved as the culmination of a series of actions which began with 37 women each getting married – to themselves: