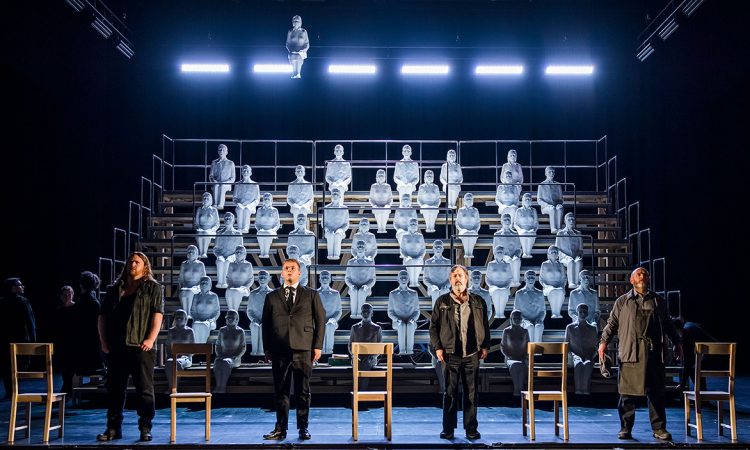 The arrival of a group of desperate refugees seeking help and shelter tears a small village community in two. OPERA NORTH season opener, BOHUSLAV MARTINU’s Greek Passion, is a bold move: a powerful allegory on a timeless – and timely – theme, says CATH ANNABEL.

It’s more than a tired pun to say this is a passionate work. It’s about suffering: the suffering of refugees, driven from home and forced to seek sanctuary amongst communities that regard them as a threat. Composer Bohuslav Martinů understood this more than most: an escapee from France just ahead of the Nazis, he was a long-term exile from his Czech homeland. But the theme is universal – to quote Martinů: ‘the heritage of man’s Christian values and his obligations to humanity’.

The staging is stark and simple: tiers of seating, occupied by a Chorus of villagers and refugees, take up most of the space. Each refugee carries a white plaster figure. Relatively featureless, they recall artist Jason Lecaire Hunter‘s powerful sculptures near Lampedusa to commemorate those who have died attempting to cross the Mediterranean. That’s surely not accidental.

The Greek Passion | The Chorus of Opera North (© Tristram Kenton)

In Martinů’s opera, village elders in a remote Greek community assign key roles in the annual Passion Play – Manolios, a shepherd, is cast as Christ, the widow Katerina is chosen to play Mary Magdalene and her lover Panait is given the role of Judas. Panait rails against his casting, as if afraid of finding too much of himself in it, while Katerina is shamed by being offered the role of Magdalene; Manolios, a gentle and mystically-inclined shepherd, protests he is not worthy to play Christ and is told that he must think how to become worthy to bear the terrible weight of the Cross.

The catalyst for change is the arrival of a desperate group of refugees, led by the priest Fotis. Their plea for asylum is rejected when the village priest, Grigoris, falsely attributes the death of one refugee to cholera, frightening the villagers.

However the newly cast Passion Players have already starting to inhabit their roles. Katerina berates her lover: ‘Have you no heart. Haven’t you any pity for all those starving people, Judas?!’ and Manolios offers them a place to find shelter, food and warmth. Manolios, growing into his role, begins to threaten the status quo and so the scene is set for the Passion Play with its inevitable betrayal and sacrifice.

Musically Martinů’s score is wonderfully eclectic, by turns plaintive and lyrical, and abrupt with percussive power. Instruments characterise particular roles, so Katerina is an accordion, while the self-important Grigoris gets the wind section all to himself… This isn’t an opera for big arias (at least not in the version performed here, though a later production did go for a more conventional approach), but Maniolos grows from being hesitant and humble, unable to express himself, to a powerful preacher and prophet.

At the beginning, the Chorus seems to be taking the musical and dramatic lead, their words are often from the liturgy. As the villagers it proclaims Christ is risen; as the refugees, it enters singing Kyrie eleison (Christ have mercy).

But the Chorus illustrate the fickleness of the crowd, one moment calling for Manolios to be driven out, the next pledging itself to good deeds at his instigation, then turning on him again, urging excommunication and finally death. The sound is incredibly powerful (the Chorus has been enlarged for this production to forty-six) and the harmonies are spine-tingling.

Even if the opera depends less on the big leads than many in the repertoire, this production is blessed with stunning performances.

Stephen Gadd exudes arrogant authority as Grigoris, his mask of piety slipping as he condemns Manolios to death. In her Opera North debut, soprano Magdalena Molendowska brings warm sensuality to the dual role of Katerina /Mary Magdalene, becoming the voice of compassion and sublimating her desire for Manolios into action: ‘It is as if all the children of the world were mine.’

John Savournin is agonised and angry as Fotis, his powerfully resonant voice asserting the needs of his community in the face of indifference. And Nicky Spence’s Manolios begins with due hesitance and ends with soaring authority as he proclaims the gospel.

If the setting is indeterminately contemporary, the message is unambiguous. The words ‘Give us what you have too much of’ are suspended above the stage, and Manolios’s challenge ‘Can you watch children dying of hunger before your eyes without rising up and demanding an account, even from God?’ continues to resonate as the opera ends with the refugees yet again on the move.

You can see this production at Leeds Grand Theatre until 19 October, when it goes on tour to Newcastle, Nottingham and Salford. More details here.

Anna Cale on Opera North, Theatre Company of Sanctuary, based on its community engagement with refugees and asylum seekers.