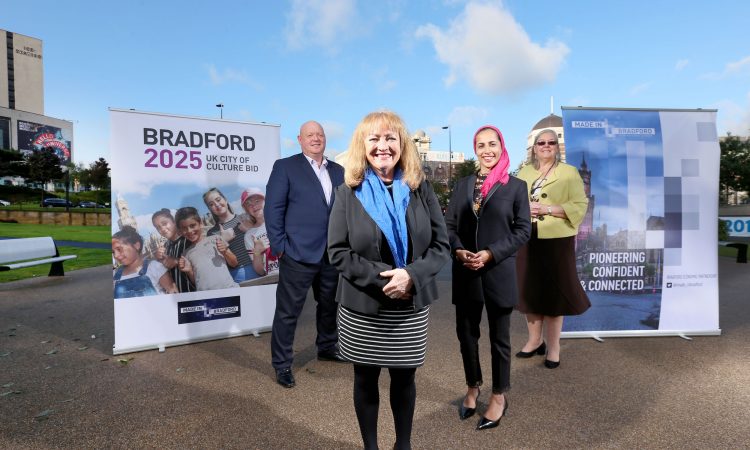 Bradford is setting its stall out in a bid to become UK City of Culture 2025. They’re interviewing next week for a Director to drive the bid forward as the district aims to follow Hull, which held the accolade in 2017, and Coventry which will host the next year-long cultural extravaganza in 2021. The bid was launched with a breakfast briefing at the Kala Sangam Asian arts centre, and RICHARD HORSMAN was there.

I’ve never lived in Bradford, but I covered the district as a reporter and news editor with Pennine Radio, and its reincarnation as The Pulse, over 23 years. There’s a poster on my office wall from (I think) the early 90s. It bears the slogan “Bradford – a surprising place” and there’s never been a truer word.

Those at the launch of the Bradford City of Culture 2025 bid were, by and large, the usual suspects. The Council, the University, the arts organisations and the business community all sent their representatives. They greeted each other warmly; they attend a lot of these dos. But along with the civility there’s a real determination to change things. As Mary Dowson, interim chair of the bid and long time director of BCB Radio put it, there’s something about Bradford that “gets under your skin”. And this time, just possibly, the city might be on to a winner.

Speaker after speaker at the launch talked of a change in atmosphere over the past few years. That change may, in truth, have been driven in part by the bland, cookie-cutter shopping centre plonked between the cathedral, its tower bearing the scars of cannon balls from the Civil War, and the incomparable Lockwood and Mawson gem of a City Hall. The Broadway might not be beautiful, but it’s brought footfall back to that part of the city centre, replacing the “hole in the heart” left when a previous redevelopment scheme fell victim to the banking crisis.

But there’s more to it than shopping. Bradford’s a surprising place, remember; what comes as a surprise is the sheer number and diversity of arts groups based within the district. The Bronte Parsonage and the Hockney gallery in Salt’s Mill might be well-known destinations but the district is also home to the likes of Mind The Gap, Freedom Studios, the 1 in 12 Club, and a Literature Festival which is winning accolades for its diverse programme and success in attracting new audiences.

Long established arts venues like the Impressions Gallery are being joined by newcomers such as the Brick Box Rooms; empty shops in the Kirkgate Centre and on Darley Street host pop-up events and exhibitions. The National Science and Media Museum has appointed a dedicated team to reflect and highlight Bradford’s home grown culture. Even pubs are joining in the cultural trend; Bradford’s oldest beerhouse at Jacob’s Well will be hosting a photographic exhibition next month almost within the shadow of the national museum.

The award winning City Park hosts year round events and celebrations amid and among the fountains where children from all communities splash around happily whenever the sun shines. And if you like Fountains, the cafe of that name is a perfectly preserved 1970s time capsule in the Oastler Market which regularly serves as a film set for period pieces shot, naturally, in the UNESCO City of Film.

Bradford Council’s Labour leader is Susan Hinchcliffe. Her office looks out over City Park, and with so much going on she told me she’s absolutely sure the district deserves to host City of Culture in 2025:

It’s not all rosy, however. Bradford has twelve wards where fewer than one in five residents engage with arts and culture at all. These wards are in white working class districts, areas popular with South Asian communities, and the inner city.

David Baldwin chairs the Bradford Economic Partnership, a business led body with a mission to add £4bn to the district’s economy, generate 20,000 new jobs and improve the skills of nearly 50,000 residents by 2030. He’s a former director of operations at Bradford City and now runs Burnley football club. He knows full well how success on the field, or self confidence in a city, can translate directly into economic benefits for the whole community. He wants every one of Bradford’s residents to be a fan .. or a “Bradvocate” .. for the bid:

But it takes more than enthusiasm to make a City of Culture bid successful.

One man who understands the task ahead more than just about anyone else is Andrew Dixon, from the consultancy Culture Creativity Place. He’s helped guide winning City of Culture bids from both Hull and Coventry. He says the first objective is to get on the shortlist, which is when the battle really starts:

The starting gun has been fired, and bids are being prepared. Bradford’s next move is to appoint a Director for the next stage, and interviews for that role are due to take place shortly.

In the meantime it’s a battle for hearts and minds at home, as well as in London, and the team have produced the video below to showcase what makes the district special.