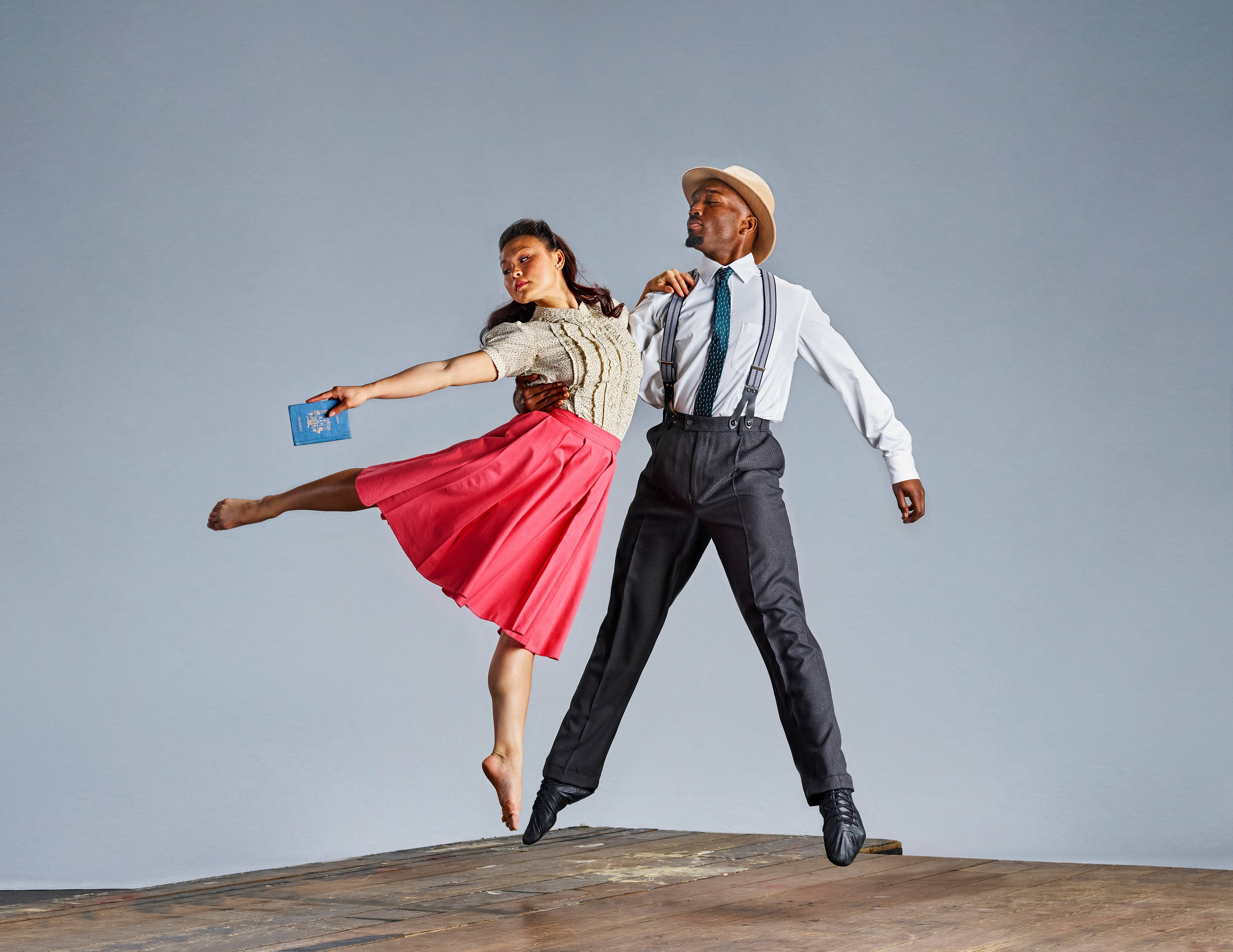 This is a show to make you re-think what contemporary dance is all about.

The words “contemporary dance” evoke immediate images; black box, dancers in leotards or monochrome costume, a soundtrack of austere strings or an electronic soundscape created in a computer. The movement is the thing, and it’s something to be appreciated and enjoyed, but appreciated with the head rather than the heart.

Not so Windrush – Movement of the People. Sharon Watson’s production is a glorious celebration of a moment in history told in movement, yes, but also in vibrant colour and evocative sound that has you leaving the theatre with a smile on your face.

What Sharon has done as artistic director at Leeds’ own Phoenix Dance is to bring together an amazing team, each contributing something remarkable to the piece with each aspect enhanced by the others. Eleanor Bull’s set (lit by Luke Haywood) transforms from stacks of luggage on the quayside in a Caribbean dawn to the boarding houses of Chapeltown and Beeston.

Her costumes evoke the colours, styles and fashions of 1948 with the swagger and vibrancy of the new arrivals in contrast to the drabness of their new home, a land in which women hanging washing hide their feelings of both loathing and longing behind white masks, whilst their actions betray their true thoughts.

For me though, it was the soundscape that truly made the production come alive. Christella Litras’ original score is perhaps most powerful in a sequence built around the repeated phrase “You Called … and We Came”, but the production also incorporates elements as diverse as Seal and Jim Reeves, as well as live gospel on stage from Caution Collective.

That’s not to detract from the dance and choreography. it’s an ensemble piece in which the company of Carlos J. Martinez, Prentice Whitlow, Natalie Alleston, Vanessa Vince-Pang, Sandrine Monin, Aaron Chaplin, Mayowa Ogunnaike, Carmen Vazquez Marfil, Michael Marquez, and Nafisah Baba capture the hope and sense of duty of those who took the journey, the hesitancy and regret of those left behind, and the contrasts of island sunshine and a grey northern town.

Windrush was the third of three pieces included in the Phoenix Dance programme for the premiere at West Yorkshire Playhouse. The evening kicked off with the playful Maybe Yes Maybe, Maybe No Maybe which did conform to my initial contemporary dance stereotype (but with its tongue firmly in its cheek), whilst the family interactions of Shadows, set to Arvo Part’s Fratres for Violin and Piano, were the perfect prequel to Windrush after the interval.

I was glad Windrush avoided the cliches of Carnival in its conclusion. That’s not knocking Carnival. It’s brilliant, but there are so many other aspects of Black culture in the UK that it’s refreshing to see a celebration of that culture that highlights different contributions.

Windrush now goes on a national and international tour, including dates in Doncaster and Newcastle, as follows:

It would be good to see Phoenix bring the show back to audiences in Leeds once it has received more exposure (and acclaim) elsewhere.