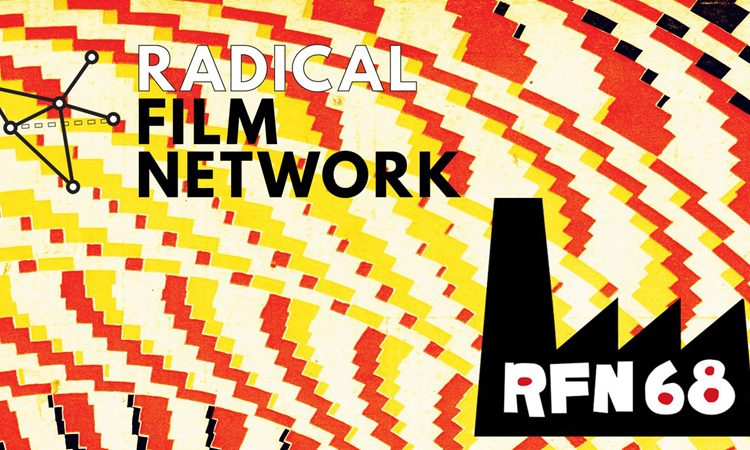 Over the next 68 days, Film Fringe’s ad hoc festival of screenings and discussions takes the radical uprisings and revolutionary fervour of 1968 as a source of inspiration. With venues of all shapes and sizes, the aim is to celebrate the unplanned, iconoclastic spirit of ‘68… Film Fringe’s LAURA AGER talks to NEIL MUDD.
theCV: So Laura, why a 1968 film festival? It’s fifty years ago, why bother with it now?

LAURA AGER (LA): As always, there are multiple reasons, there’s a personal and a political. Two years ago I decided to screen a film by Olivier Assaya called Something In The Air (Apres Mai) at The Reliance as part of the Leeds Print Festival. It was one that had stuck with me when I had been working at Bradford International Film Festival where they did a celebration of Olivier Assaya’s films and, in this one, it’s a retelling of the events of May ’68 and their aftermath. You see the students making their posters, printing them off and pasting them up around Paris, and it just seemed very exciting and, in the context of the print festival, here was print being used for very direct political aims. That film has really stuck with me and once the idea grabbed me, I realised that a lot of the things I was reading and watching related back to this moment in May 1968, so I’ve been working with that idea ever since really.

And then when it comes to the political, I belong to this organisation called the Radical Film Network (RFN). It’s been around for about five years, and this festival is connecting groups of film distributors, critics, writers and so on all around the UK. It’s one of our biggest projects so far and over the course of discussions, again over the past two years, we decided the Golden Anniversary if you like of 1968 was an idea a large number of the RFN found appealing to unite us, to do something together. It’s an ambitious project, but it’s an opportunity to see as an organisation what we can do, so it’s a combination of those two things.

theCV: So why is 1968 so significant in terms of activism and what is the RFN’s purpose? Is it to raise awareness of radical film-making per se or by making explicit the connection for people between cinema and activism?

LA: There are a number of different reasons why people have affiliated with the RFN. The network is still growing and it brings together a number of people with different practices and different interests, so in a way this a step in our journey together to see what we want to do, how we want to do it. One of the things activists struggle with sometimes are these more institutional frameworks – What do we want our organisation to feel like? – and it’s become horizontal, non-hierarchical, almost project based with people coming together around projects. It seems that that is the model lots of different activist groups work with, so we are in a process, and this festival is very much a part of that process.

In terms of 1968 being a key year for activistm, I can’t really say for sure why that is at the moment, but it seems to be something which reaches around the world. There are various other aspects beyond the iconic May 1968 imaginary. From the very start of this year, I’ve been looking at the news from 1968, trying to get a global view on what’s happening, and it’s a really extraordinary time. You’ve got Alexander Dubchek introducing ‘socialism with a human face’ in Czechoslovakia, temporarily allowing free artistic expression, political discussion and the democratic flow of ideas in an era which became known as the Prague Spring, but was certainly not without its contradictions, problems and ultimately violence. Then as you go through the year you have the key assassinations – Martin Luther King, Bobby Kennedy – and the fallout from those; you also have a huge number of post-colonial protests and as you get towards the end of the year the iconic Black Power salute at the Mexico Olympics. There is also the famous picture of earth taken by the Apollo 8 NASA mission which some people believe sparks a collective sense of environmental consciousness around the world, so it’s a year of epic moments like that and it somehow becomes fetishisized in terms of the cultural imagination, but I certainly think there’s a lot more to it than that.

theCV: Not all the films being screened are from 1968 and not all of them are films, so what was the rationale behind the choices people were making?

LA: First of all, the way the festival has been set up to be non-hierarchical and more of an invitation than a curated event means that there is no boss and nobody to tell people what they can and cannot show. It’s a really open provocation I suppose you could call it. It’s an invitation to respond in whatever way you see fit, to whatever interests are at the forefront of your mind. I’ve been trying deliberately to get away from a narrow European focus – student uprisings and strikes in Paris, Madrid, Berlin and so on – which is obviously very much a key part of it, but I’ve been looking at the Poor Peoples’ March in Washington, the war in Vietnam which was a huge catalyst around the world and then, I suppose, there’s a shaking out of a really stuffy post-war culture. It’s interesting to look at how that played out in the UK, there’s the ‘I’m Backing Britain’ campaign, for instance. It is wider than ’68 and it’s a good tool to think with, taking the inspiration of this one particular year and starting to explore it. It’s been percolating in a lot of people’s minds for the past couple of years and I suppose some have made connections with what’s happening now – I know that the group in Scotland has very much connected to local activism and very current campaigns. I’m taking more of a phenomenological look at what the culture was, but also I’m being really directed by the conversations I’ve been having with new partnerships that have emerged. It’s about staying open to possibilities, rather than trying to nail it down to the films of just one year.

theCV: Obviously it’s very difficult to single out particular events, but is there anything that you are particularly excited about? One of the events we’re looking forward to is seeing Big Flame with Tony Garnett for example.

LA: Seeing as you mention it, Big Flame is going to be a really special event. We lost a wonderful comrade and colleague a few years ago – Matthew Caygill – who was a lecturer at the university, a wonderful supporter of cinema. He was incredibly knowledgeable about film, about social history, about working class politics. He was an absolute legend and inspiration, so we are making the Big Flame screening at the Hyde Park Picture House a Matthew Caygill Memorial Event. We’re also totally thrilled to bits that Tony Garnett is going to join us and we also have a representative of a political group called Big Flame in the form of Max Farrar, activist, campaigner and so on, who many people in Leeds will be familiar with.

I’m working for the first time with the Institute Cervantes in Leeds to bring a Spanish film on 35mm. It’s these new collaborations which are getting me the most excited. I’m also working with Monsieur Dejeuner in Headingley. They regularly have a French film night, so I approached them with an idea and I’m really happy to say they’re showing Milou en Mai in the cafe where you can have French food, wine and beer and watch this rather gentle comedy.

Obviously The Prisoner at the Courtroom in the Town Hall will be a sensation. I’m really excited because it’s not something I really know very much about which is part of the joy of partnering with other groups, but I would like to say that a really special screening is In the Intense Now which is a very, very rare chance to catch a brand new film that made waves at the Berlin Film Festival and has really only just finished its festival run. We’ve got it straight after Flatpack in Birmingham, so really is very new. It’s an essay film which tackles the political situation a little bit before ’68 and takes a more global view including China and beyond.

Then finally we are having a party on the 20th at the Outlaws Yacht Club where we are showing The Monkees’ Head and DJ Ashtray Navigations will also be spinning some records.