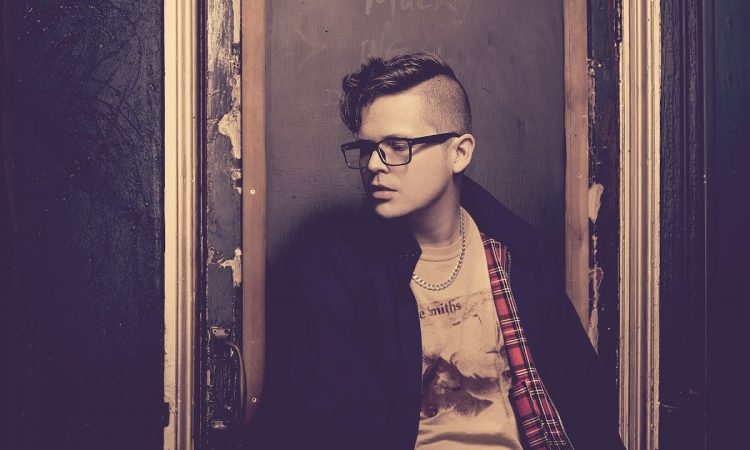 One of the many high points in Words in the City, an upcoming weekend festival of poetry and the spoken word in Leeds, is the nostalgia and political relevance of FRANKIE VAH…

Luke Wright’s verse plays, like much of his other work, try to blend the personal and the political – to show how policy and discourse can affect the way we live our day-to-day lives. His first play, What I Learned From Johnny Bevan, dealt with the legacy of New Labour, and in particular their failure to eradicate class as they hoped to. In Frankie Vah he goes back thirty years and focus on a labour activist/ranting poet in the Thatcher’s Britain.

But the play isn’t some extended rant against Thatcher. What could be said about Thatcher that hasn’t already been said? Instead it focusses on the internal struggles of the Labour party.

Wright says “In 2016 I was watching the Labour party tear itself apart over Trident and Brexit. The right of the party was gunning for the leadership. The leadership was showing itself to be particularly tin-eared on certain issues. The Tories were riding high as a result.

“But it’s hard trying to make sense of the events unfolding in front of your eyes, especially if you’re writing in verse. Writing in verse is a painfully slow process – you can’t just splurge and edit. I knew that if I was going to spend a year of my life crafting a 9,000 word poem I wasn’t going to risk there being some big political event that might render the whole thing out of date. Besides, a sense of time and perspective always helps.”

So Wright went back in time to the last occasion when Labour was publicly tearing itself apart: the 80s. He was born in 1982, so there are events which he talks about that happened before he was born. But he explains: “I’ve had a healthy interest in modern political history for a few years now, and it was thrilling to bring back to life iconic moments such as the Healey/Benn deputy leadership contest, Kinnock: the movie, and the Battle of Orgreave.

“As a child of the 80s these events feel like folklore – like Live Aid, the fall of the Berlin wall, or Maradonna’s ‘hand of god’. Time has rendered them almost magical. It’s hard to believe modern events will have the same pull on the heart. But they will. In thirty years’ time Grenfell, Brexit, and the Windrush scandal will be folklore for the iGenners who have some vague recollection of glimpsing them on the screen during those golden, fuzzy years of school trips, ice creams and holidays.”

For those who were there in the 80s, the show has a nostalgic quality. Wright makes no apology for that as encased within the nostalgia are political themes and ideas that are very relevant today, and will be again in future. There’s also a personal story – a coming-of-age tale that’s as rife with failure and heartbreak as it is hope. You might ask him how he managed to capture your youth so effectively, but in truth he hasn’t – he captured his own – the hope, the booze, the unstinting belief in something or someone, and the inevitable ice-water of reality and dawning realisation you might have got it all wrong. The passions of youth are timeless; it’s only the soundtrack and the political figures that change.

FRANKIE VAH appears at Carriageworks Theatre on Sunday 13th May at 7:00 pm. Part of Words in the City, a weekend festival of poetry and the spoken word in Leeds from 10 to 13 May. Further details here