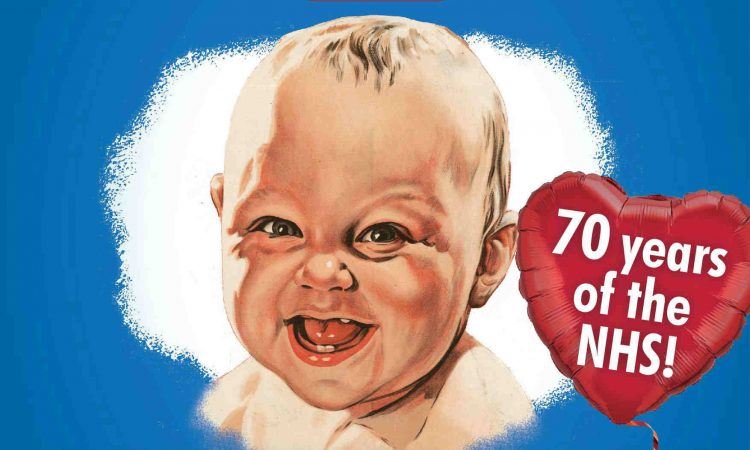 GET WELL SOON celebrates 70 years of the NHS in rollicking style, and also confronts the tensions the service is under. Marsden based MIKRON THEATRE is best known for touring musical shows on a narrowboat, but RICHARD HORSMAN’s appointment with the company was at the SQUARE CHAPEL in Halifax.

The NHS has been around for so long now it’s easy to forget that the entire history of Britain’s cradle-to-grave healthcare, free at the point of need, has played out within one man’s lifetime.

Mikron‘s new show celebrates this birthday by imagining a baby born in 1948, on the same day the NHS came into being. Brian (James McLean) is now 70, and recovering from a stroke.

His son Simon (Christopher Arkeston) is a manager at the same hospital, which is threatened with closure. Simon is trying to squeeze further efficiencies out of the system even as it takes a toll on his own health; although his prime affliction is a bad case of “run it up the flagpole and see who salutes” verbal management diarrhoea.

His daughter, and Brian’s granddaughter, Daisy (Daisy Ann Fletcher) is a rebellious spirit who’d rather make music than make money. Simon wants her to succeed. So does Brian, but in a rather different way.

Our principal cast is completed with Danuta (Rosamund Hine) who brings a contemporary twist to our family saga as a Polish nurse, caring for Brian, who faces an uncertain future amid the cuts – and Brexit. What is certain is that she’ll know an old Polish proverb about any situation. Even if she just made it up.

Get Well Soon is a fast moving show with some cracking songs performed live by the energetic cast, who also play all the the minor parts and the instruments as required.

It’s a serious subject, but the tone never gets too heavy in Ged Cooper’s script. Ged is a graduate of Mikron’s new writers scheme, and says she was “thrilled” to be asked to create a show about the NHS.

The ensemble cast make each other look good and make the complex, quick changes of scene and tone look easy. Rebekah Hughes’ music is seamlessly integrated; the action doesn’t stop for a song, the song comes along in the right place for the action, and there’s no excuse for not joining in when the words are in the programme.

Special mention should probably go to Daisy Ann Fletcher who stepped into her role with only nine days’ notice when the actor originally cast had to go into hospital. Life imitating art.

Mikron’s tour takes in venues large and small, and the design of the production is probably best suited to the pubs, clubs and community halls that will play host to the company over the summer. If anything the four rotating cupboards that make up the simple but functional set, each side a different location, felt a bit lost in the large open space of the newly-renovated Square Chapel.

Marianne McNamara’s deft direction flags up many concerns about the future of, in Nigel Lawson’s words, “the nearest thing English people have to a religion”.. but avoids polemic.

The bulk of the first night audience could probably be described as left leaning, judging from their reaction to any mentions of the Conservative government; it would have been so easy to play to this crowd by making Simon the manager a pantomime villain. Instead, we get to appreciate he’s also doing his best in often impossible circumstances.

This is Mikron’s 47th season, and recent funding announcements mean their future is secure through until their own 50th birthday in 2022. And with exciting projects in the pipeline, including a show based round Butlin’s holiday camps, the prognosis is good.

Mikron’s Get Well Soon is touring … well, everywhere – the complete list is here.

Next West Yorkshire performances are in Meltham, Guiseley, Bingley and Dewsbury.