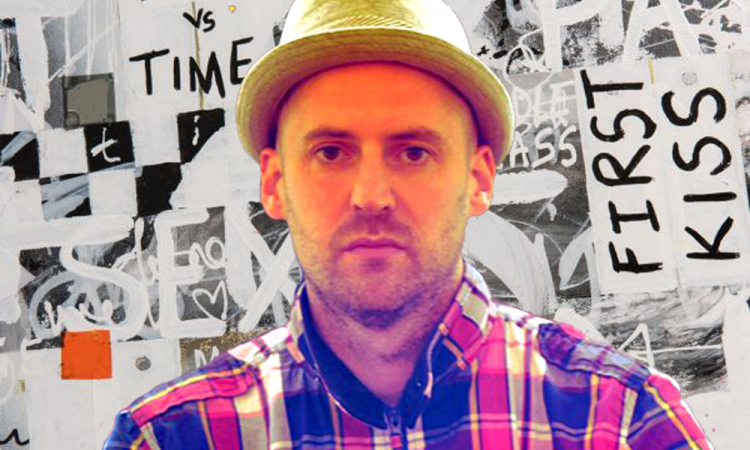 Leeds artist DAVID RUSBATCH has a new exhibition called Flaunt Every Kiss at Harrogate’s RedHouse Originals Gallery. He talks to NEIL MUDD about status anxiety, not sniffing glue and post-Feminism…

David Rusbatch has little time for social media. “There’s a book called Status Anxiety [by Alain de Botton] which identifies people’s need to (use) it for their own reasons,” he tells me as we chat about his new show Flaunt Every Kiss at Harrogate’s RedHouse Originals gallery. The Leeds based artist knows he is caught in the same trap. “I’m guilty of doing it myself when I read the paper. We don’t have the concentration spans any more to read anything in full.”

Flaunt Every Kiss grew out of this internal conflict and stems from a time when Rusbatch was internet dating and trying to reconnect with the world following the collapse of a long-term relationship.

“It’s a cliché when people say you are a product of your environment, but you’re also a product of where you are in life,” he says. “These couples you see in new relationships who flash up images of how brilliant it is, then a month later all these pictures suddenly disappear like it’s never happened.

“The more people flaunt their lives, the more unhappy they seem. It almost feels proportional between the two at times. Everyone is papering over the cracks in their lives.”

Born in Leeds in 1979, Rusbatch graduated from Central Saint Martins in London, and has been exhibited at the National Design Museum and the Venice Biennale amongst others. Norman Cook (aka Fatboy Slim) and Maxi Jazz of Faithless are fans.

The connection is apposite. Rusbatch has always tied his art in with music – growing up he was big on Oasis and Michael Jackson – and with dance music in particular. His art makes a virtue of the irridescent colour palette and outsider iconography of underground rave culture.

“It represented a genre of music that wasn’t taken very seriously. It was dismissed as people with no musical talent pressing buttons on a computer in their bedrooms, but the tide has turned and it’s helped being able to jump on the coat-tails of that.”

It can also have its drawbacks. Creating works for Flaunt Every Kiss, Rusbatch was twice overcome and hospitalised with fumes from the toxic polyurethane resins he employs in his paintings. Hooked up to a heart monitor, he was later discharged, but took three weeks to fully recuperate at home.

The main culprit appears to have been Superglue, which the artist uses to affix his trademark coloured gels, “but please don’t say it was recreational,” he pleads.

Flaunt Every Kiss is described as the artist’s ‘most personal’ exhibition yet. Previous show (2016’s I Used to Sleep at Night) looked to the liberating possibilities of nature, whereas the focus in his new works is introspective.

There is an urgency and immediacy to Rusbatch’s art. The work in Flaunt Every Kiss merges abstract impulses with found images and text. Rusbatch is an admirier of artists Jean Michel Basquiat and Robert Rauschenberg; the former can be discerned in Tickboxes of Life in the West (“as if there’s almost a formula to life,” despairs Rusbatch) and the latter in Whirling.

However, these are not the work of a copyist, but are fresh and startling meditations on contemporary relationships and the speed of life. A series of wonderfully understated pieces – each with tell-tale titles like Grasp and Lost – resonate with the minimalist directness of pop artist Richard Hamilton, while the military ribbon shorthand of The 8 Colours of Yorkshire invokes the artist’s beloved Dales.

He maintains a bolt-hole in Malham which affords sanctuary. “It’s not so much a cocooning,” he says when I suggest this might be its appeal, “as to have the space to think about how crazy and frantic city life can be. I don’t think the human brain is evolved enough to cope with modern life, so I’m quite happy to put away my phone.”

“When you’re in the middle of a tornado, you can’t really see much else, but when you step out you can see the whole world and get a sense of proportion.”

To say it divided audiences would be an understatement. Rusbatch groans when I bring it up. In an entertaining foul-mouthed response (which, to be fair, the artist points me towards), Sady Doyle wrote: ‘To recap: first, we were geniuses. Then, we were harpies. And now, we’re whores … Shut the fuck up David Rusbatch!’

Is it the artist’s job to provoke, I wonder? “I grew up with the YBAs – the Damien Hirsts, the Tracy Emins – who were all about shock and controversy,” he says “When I did that postcard, it was early in my career. Maybe it was leaning a bit more towards that kind of thing because I was new and I wanted to make my name, but it wasn’t done consciously to create offence.

“It was almost an attempt to argue whether there is a need for feminism. There are the old school feminists who say women shouldn’t be victimised or sexualised, but also at the same time there are women who are choosing to use (pornography) to make money and get ahead of a lot of men in life.

“There’s so much that people airbrush it becomes stale. It wasn’t really a deliberate provocation. I’ve had feminists defending it as well. It’s exciting to see how people interpret it. I’ve got three sisters. You can’t be anti-feminist with that. I wouldn’t be alive basically…”

Flaunt Every Kiss eschews controversy in favour of the intimate and revelatory. A large number of the works have sold already, a reminder of critic Robert Hughes’s dictum that as far as creativity and commerce in the art world is concerned, ‘the lamb must lie down with the lion.’

“There’s always a tension between creating and making money from that,” says Rusbatch, “but there’s no point me doing it if I don’t love it also. Owning a piece of art is like owning a piece of somebody’s soul.”