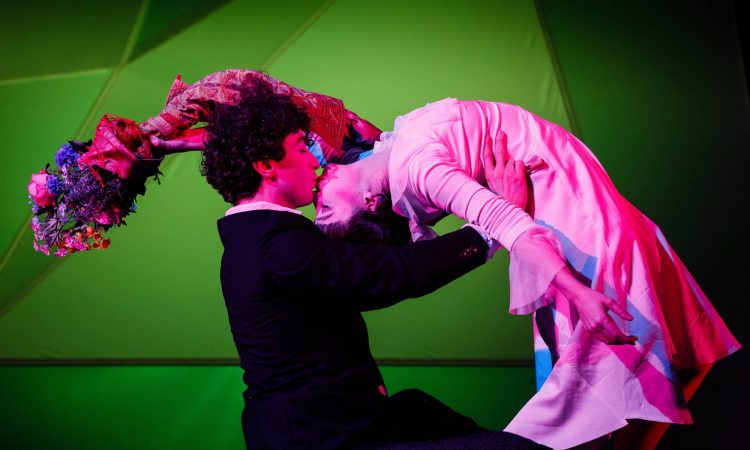 The Flying Lovers of Vitebsk from KNEEHIGH at the WEST YORKSHIRE PLAYHOUSE is a visual treat that will delight lovers of dance, drama, mime, music and fine art. As RICHARD HORSMAN discovered, it’s a show for those who like their theatre to be, well, theatrical.

Multimedia is a term much used and abused today, mainly when discussing the sterile digital distractions of the online world. The Flying Lovers of Vitebsk is very much a multi media production, in that the colours of the set are just as important as the words the actors say … if indeed they are actors.

Marc Antolin and Daisy Maywood take on the parts Marc and Bella Chagall, and are equally accomplished as singers, dancers, mimes and clowns in an ingenious set which creates a whole world in a very confined space.

Sound is just as important; not only the live music that evokes Parisian, Russian and Jewish themes played by James Gow and Ian Ross, but also in Simon Baker’s sound design that integrates the clicks and whirrs of an old style telephone with rainfall and gunfire in an evocative soundscape that adds a fourth dimension to the on-stage action.

The romance between Russian-French artist Marc Chagall and his wife Bella can best be described as bittersweet.

Chagall was a leading pioneer of modern art whose vibrant, original style evolved against one of the most tumultuous and terrifying periods in history. His surreal and highly memorable images of green cows and, yes, flying lovers were radical in their time, which was also a period of radical politics in his native Russia.

Chagall and Bella were swept up in the confusion and brutality of world wars and revolution to which he responded with a radical, original visual style which was both mythic and dreamlike, fusing everyday settings inspired from his home town in Vitebsk in an extraordinary mystical lament, conveying love, loss, exile and the miracle of survival.

The early scenes depict the flowering of love between the lanky and unworldly artist and the passionate and confident Bella – “one of the four most clever women in all of Russia”. I challenge any viewer not to be charmed by the courtship of the couple in an idyllic, youthful world of vibrant colour.

The scene turns monochrome as war comes, and then red and grey as the 1917 revolution changes the social order.

Bella is forever encouraging her husband in his art. But this isn’t a perfect love story.

Marc could be cold and uncaring in relation to Bella’s needs, putting his art before the support she needs in the aftermath of childbirth, and even tearing her writings without a care to fashion a paper butterfly for their daughter Ida.

The coming horrors of the Nazi era are also hinted at, as is antisemitism in both Europe and the USA as the lovers are denied a fairytale ending when Bella succumbs to infection that would be easily treated but for a wartime shortage of penicillin in a rural American hospital.

Written by Daniel Jamieson and directed by Emma Rice, The Flying Lovers of Vitebsk is presented by Kneehigh and Bristol Old Vic at the Courtyard Theatre at West Yorkshire Playhouse until Saturday 24 March.

Tickets for the remaining shows are in very short supply – you’re advised to ring the Box Office for late availability on 0113 213 7700.