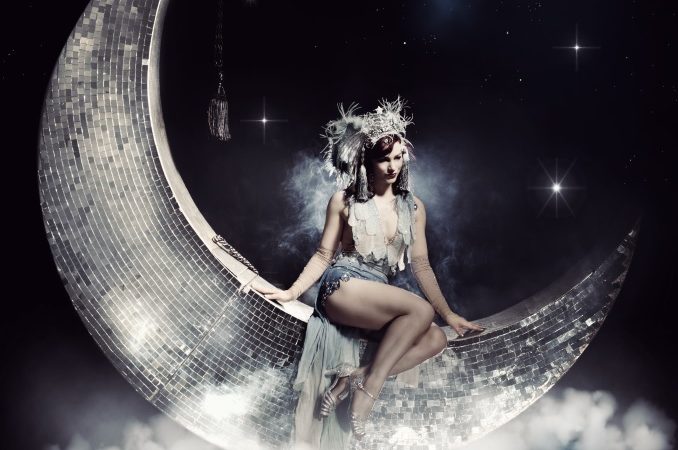 For one night only at Bradford’s Odsal Top Stadium, CIRCUS SALLAI and HEIDI BANG TIDY came together for BIG TOP BURLESQUE. NATHALIE TOLMIE-THOMSON sat back and enjoyed, and now reports on her experience of this unique collaboration.

For one night only, I was lucky enough to bear witness to a unique coming together of industries of the evening – burlesque and circus.

The product of four years graft on the part of burlesque producer Heidi Bang Tidy and partnership with Angel Sallai of Circus Sallai (the UK’s youngest ringmaster…mistress mind you!) this performance was truly something to behold.

Such hyperbole is banded around a lot these days but in this case, there is no exaggeration to be had. The thrill of it all, from the seductive powers of some pretty magical creatures to the choke-on-your drink acts of pure courage and daring. It had all the pleasure of a roller-coaster with none of the dinner on my lap.

The sun had just dipped for another day when I arrived, so the illuminated Big Top tent was not difficult to spot, literally plonked in the middle of Bradford Bulls Odsal Top stadium. as if it had always been there like an ineffective yet spectacular TARDIS.

I can put my hands up now and say that I have never been to the circus before out of fear of beholding animal exploitation in the traditional colonial-Victorian style.

However these days, and this circus in particular, had none of that…unless you count the talents that have been collected like rare breeds who let loose their raw and carnal performances on stage, unfailing in their ability to wow people with little more than their brawn.

It wasn’t even until I’d sat down, fenced in on all sides by glitter waistcoats, miniature top-hats, elaborate fascinators, corsets and petticoats that I began to understand that this was as much a burlesque event as it was a circus.

It was kinky as fuck in there. However, although there were plenty of alternatives playing the part in the crowd, there were also smatterings of beige normies, piquing their curiosity at the promise of flesh and fancy.

Seated on wood and metal stalls like a commoner, I looked beyond to the VIP tables where the burlesque royalty were seated and the complimentary bubbly flowed aplenty, served by very good-looking bar staff.

I later realised that literally everyone working front-of-house were members of the circus troupe which I came to learn is a big part of the circus life – everybody mucking in, bleeding their audiences dry with snacks, beer and merch whilst giving them the time of their lives.

Beyond the clusters of sultry-clad big-wigs was the ring itself, bathed in lighting effects and staged in front of plush red curtains, so there was absolutely no denying where we were and where our focus would be transfixed.

The show kicked off with an opening number starring Cece Sinclair, belting out One Night Only whilst accompanied by acrobatic dancers and climaxed (wink wink) straight away with a gentlemen spinning by his mouth at the end of a rope that elevated to the big top ceiling.

It was an excellent taste of the delights to come. After a warm welcome by Angel and Heidi who made their position very clear: ‘GENDER IS A SOCIAL CONCEPT’ Angel cried, and the audience hooted and whooped and thundered applause in response.

This was a place of diversity, equality and acceptance and for the time we were all together under the big top, we were able enjoy the wonders of being human as one.

Once the introductions were done, in a way that was both professional and laced with cheeky humour (‘moist’ came up more than once), and recurring characters of the evening made their presence known, the first main act took to the ring.

A giant umbrella was hooked to a suspension cord in the centre and the performer that emerged very soon proceeded to hang by its crook by her neck followed by an array of aerial acrobatics with spins and periods of being upside-down.

Every audience member was gripped with awe and concern for her safety.

But she nailed it, as did every other performer after her, from a rope swinging, heart-in-your mouth Wheel of Death (you’ll have to Google that one) to some absolutely breath-taking performances: Anna Fur Laxis with her axe-throwing and strip-teasing; Velma Von Bon Bon Bon’s hilarious cocktail glass performance; and, my unequivocal favourite, Vicky Butterfly who demonstrated another side to burlesque with utter romance and elegance.

This list doesn’t do justice to the many performers and performances that took place that night, and I fear if I tried I’d start just typing onomatopoeic guttural noises out of the joy and excitement they filled me with.

Generally though, it was so satisfying to watch these men and women in their element, clearly enjoying their bodies for their beauty and ability to move as well as their strength and flexibility.

Both in individual acts and in tandem, they demonstrated the sheer fun that can be had once the veil of social expectations and superficiality is stripped away.

That’s not to say that the wigs and glitz were not delightful in their own right – the various interpretations of sexiness both amongst the cast and the crowd created an atmosphere that was a pleasure to be a part of.

A highlight of the night for me, and this is what tipped the scales to exceeding expectation levels, was aside from the dazzling performances of the night, Angel and Heidi gave us an education on the history of the circus and what circus life is like right now, and how much it has in common with the art of burlesque.

Both of these entertainment industries are for the pleasure of audiences that are in need of something out of the ordinary, extraordinary even. Never again will I turn my nose up at the circus when it comes into town, I may even be in danger of running away with it.

Adding the burlesque element to it was a stroke of genius, as both work so beautifully together. I take off my miniature top-hat to Angel and Heidi, two women powerhouses at the top of their game, for bringing such an extravaganza to the city of Bradford and I can only hope that they one day return.