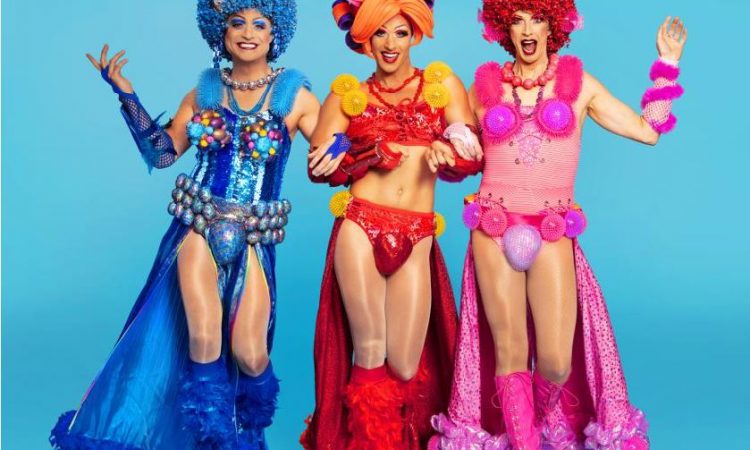 With three cracking leads, a live orchestra and more camp classics than you can shake a sequinned booty at PRISCILLA, QUEEN OF THE DESERT at BRADFORD ALHAMBRA is the perfect antidote to the Brexit blues, says RICHARD HORSMAN

It’s a measure of just how far social attitudes have changed since the film this stage show is based on came out (so to speak) in 1994 that PRISCILLA, QUEEN OF THE DESERT has largely lost its power to shock.

Twenty five years ago the story of two drag queens and a transgender woman crossing the Australian outback in a bus to meet the son one of the trio has fathered was pushing a lot of boundaries. A thoughtful comedy, yes, but opening a lot of eyes to a counter culture that was still largely unknown.

Today it feels more like the annual celebration of Leeds or Bradford Pride brought indoors onto a stage with a largely feelgood narrative and a non-stop medley of singalong, stompalong club classics from “It’s Raining Men” via “I will Survive” to “MacArthur Park” .. complete with a cake that was indeed left out in the rain with all the sweet green icing running down.

It works because the leading trio of Joe McFadden, Nick Hayes and Miles Western deliver performances which complement each other well.

McFadden plays the dad Tick who’s spent six years touring as drag queen Mitzi, avoiding meeting his son because he fears rejection for who he is. Hayes is Kylie-obsessed Adam, the youngest of the group whose alter ego Felicia has all of the dance moves, whilst Western delivers the most nuanced performance as Bernadette, a transgender woman of the older generation who toured with “Les Girls” at a time when drag artists were commonly referred to as “female impersonators”. Benadette has found lovers but never love, until the road trip in the bus they name Priscilla.

The singing is bolstered throughout by the three Divas – Aiesha Pease, Claudia Kariuki and Rosie Glossop – who together form a kind of BBW-gospel-Greek chorus to add harmonies, volume and sass to the proceedings as required. Jacqui Sanchez provides a raunchy cameo as Cynthia, the Vietnamese bride who can do amazing things with ping pong balls, and Daniel Fletcher grounds a lot of the silliness as the big hearted motor mechanic Bob; a decent and lonely man who finds his encounter with the colourful travellers life changing in ways he couldn’t imagine.

The staging is simple but effective, with the narrative taking place largely in the foreground with the big stage behind being opened up for the big dance numbers. It is perhaps a shame that the live orchestra is entirely hidden throughout.

He says the show “tackles people wanting to be different and simultaneously the way in which we’re all really the same underneath. I think the music is great, but it was born out of a great story too.”

Essentially the production is a softcore fun drag show with poignant moments of real tenderness. It touches on and rather sanitizes violent undercurrents of homophobia, prevalent in 1994 and still with us today, but overall the themes hang together and we feel empathy for the three leads as their stories play out.

PRISCILLA, QUEEN OF THE DESERT continues at the BRADFORD ALHAMBRA THEATRE until Saturday 21 September