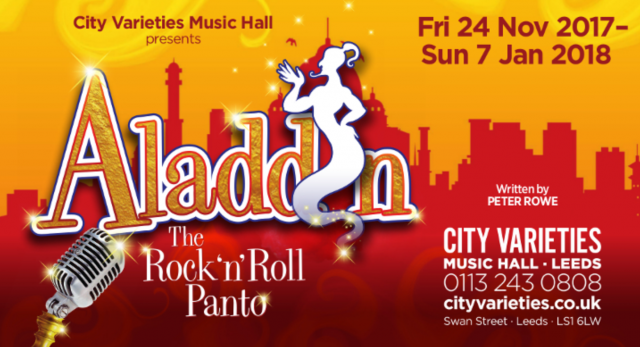 Widow Twanky walked into a bar and asked for a double entendre… So Abanazer. Phil Kirby gets into the panto spirit at Leeds City Varieties.

You normally have to suspend all disbelief to enjoy panto.

At Aladdin, the Rock ‘n’ Roll Panto, at Leeds City Varieties you have to dangle your disbelief by its heels over Leeds Bridge, shake it hard to dislodge the last clinging shards of incredulity, knock its brains against the ornamental ironwork, then fling it howling into the dark and turbid waters of the River Aire below. Months later Crime Scene Investigation may find your disbelief washed up somewhere along the cold, flat coastline of Cleethorpes. Or it may never be recovered at all.

Aladdin, the Rock ‘n’ Roll Panto, really is that good.

The setting is the phoney far east. Somewhere, as the Storyteller says, way beyond Garforth… and that’s about the most plausible bit of the proceedings. Things get completely crackers after that. Aladdin, the Rock ‘n’ Roll Panto stretches credulity to the snapping point more times than Widow Twanky’s knicker elastic.

If it’s subtlety, social comment, and cultural sensitivity you are after, I’d suggest a different theatre (there’s one just down Eastgate that does that sort of thing, though it’s not half the fun.)

And you get to boo.

We don’t boo enough these days. Which is curious given the state the world is sliding into. Doctors ought to be able to prescribe a regular bout of booing on the National Health. Booing is good for you. And there’s no shortage of booing opportunities in Aladdin – endorphin-pumping, esteem-raising, exhilarating booing that rattles the rafters of the City Varieties every time the name of the villain of the piece, Abanazer, is mentioned.

Or Abanazer enters stage left; the band plays Dah duh daaah! the lights flicker on and off, every head on stage is swivelled histrionically… and we boo.

Two of my favourite things about panto are, first, it’s genuinely inclusive. I can’t think of many other cultural experiences that can pull in an audience with ages from 3 to 103 (and some of them were even from, dare I say it… council estates! I’ve been going to the panto at City Varieties since I was 4, and we lived in Miggy. Crikey.) And second, it’s always a joy to watch superbly gifted performers – beyond the clowning and overacting and general misbehaviour you don’t get even the smallest part in a panto if you aren’t ridiculously talented. Listen to the Aladdin cast do any of the 23 tunes featured (and go watch them do “Freedom”, an Aretha Franklin tune, sung, performed, and played absolutely amazingly! If I had to have a favourite on the night, that would be it.)

Oh, and there’s a load of boulders…

Aladdin, the Rock ‘n’ Roll Panto is on at the City Varieties until the 7th of January. You’d be daft to miss it.

We never gave ratings or stars on Culture Vulture, but I’d definitely give Aladdin five boos and a whole lot of of hisses.

Next year I’ve heard a rumour that Leeds will be doing “2023: The Rock and Roll Panto”? It’ll start of with a stirring rendition of the Bee Gees, “Tragedy”, and end with Abba’s “Waterloo”,

My, my, I tried to hold you back but you were stronger
Oh yeah, and now it seems my only chance is giving up the fight

Waterloo, I was defeated, you won the war…

Just go and see it.