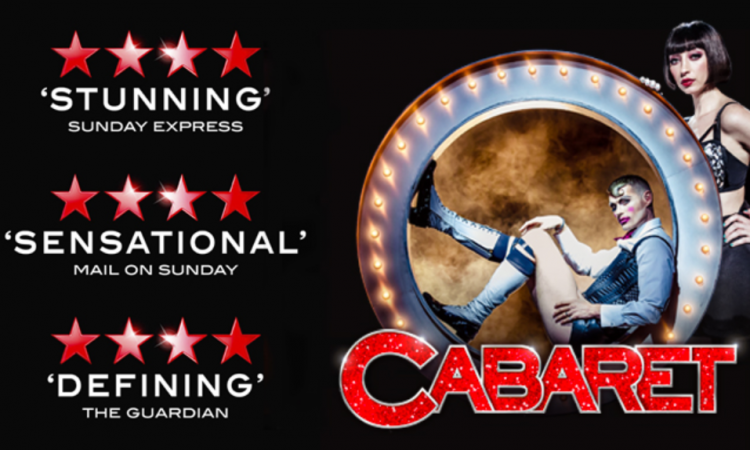 Cabaret at The Grand Theatre Leeds. Words by PHIL KIRBY.

I’ve always had a bit of a problem with Cabaret. It’s not that the musical is completely unfaithful to the book it’s meant to be based on – Isherwood’s Sally Bowles rarely appears on stage and the one time she opens her mouth to sing she’s rubbish, which isn’t a problem in a novel but obviously wouldn’t be a great basis for a theatrical production. And it’s nothing to do with the quality of the songs, which are all brilliant… well, maybe there’s the odd one or two that grate on the ear, but I’ll return to that in a bit. What bugs me most about Cabaret is the way it treats history. Or more specifically the way most people seem to interpret the picture of Weimar Germany and the rise of the Nazis that the musical stages.

Take this from the official brochure:

The recently proclaimed Weimar Republic had unwittingly ushered in an age of permissiveness by abolishing all censorship, so that there were no closing hours, no censors and no morality laws.

What? Really! This statement would have come as a great surprise to the campaigners against the sodomy laws, the women’s groups fighting for legal abortions, and the various parties debating the rights and wrongs of male and female prostitution. All this is more than hinted at in Cabaret.

Weimar Berlin was the sex tourism capital of Europe. And it was a buyers market. The sexual decadence of the city was more due to the dull compulsion of economic forces than so called cultural permissiveness. Anything imaginable could be bought and sold and there were even tourist guides that catered for every taste (quite literally.)

The Kit Kat Club was part of this economy. And Fraulein Kost wasn’t entertaining half the Hamburg fleet for the good of her health.

The most interesting and confusing aspect of Weimar culture was the attitude towards homosexuality. In one scene in Cabaret Cliff Bradshaw is caught reading Mein Kampf, in order to learn something about German politics he says. Mein Kampf doesn’t contain a single sentence condemning homosexuality, which is odd as Hitler was hardly shy about naming every single section of society he hated. And when Ernst Ludwig invites Cliff to the club for the first time he has no scruples about mentioning the “boys” on offer; it doesn’t even cross his mind that homosexuality is unGerman. Later, when he has Cliff beaten up by a gang of Storm Troopers the bully boys in brown shirts were quite probably gay too, according to the source quoted in the programme notes:

Under Rohm (Hitler’s best mate), the SA leadership acquired a rather special quality, however, for the crude and blustering Oberster SA Fuhrer was also a fervent homosexual and liked to surround himself, in all the positions of command, with men of similar persuasions. (Otto Friedrich, Before the Deluge, p327.)

Even The Guardian admits as much in this review of a TV adaptation of Christopher and His Kind, based on Christopher Isherwood’s autobiography of his adventures in Germany in the early ‘30s.

Weimar was a much more complicated place than we normally give it credit for. And, refreshingly, this new production at Leeds Grand doesn’t spare us the full ambiguity. From the opening number, Wilkommen, to the Tom of Finlandesque boys in the dance troupe, to the bleak and savage naked denouement, this Rufus Norris directed Cabaret is as dark as it gets. (In some versions Wilkommen is played all sweetness and light, almost suitable for children – or The Muppets…)

Two songs for me stood out in this production. I’ve always detested If You Could See Her (I think it’s utterly vile and tend to fast forward when I watch it on TV) but the performance was made bearable by having the gorilla perform behind a sheet, avoiding the unnecessary unpleasantness. But no matter how you disguise the ape there’s no getting away from that last line…

Then there’s Tomorrow Belongs to Me. It’s hard to top the film version but I think this was the best attempt I’ve yet seen. In the film a young, blond chap begins to sing to an audience in a beer garden. The song is standard German Romantic or folk fare, with stags and streams and babies and something called a “linden” (which I always assumed was a tree but have never bothered to check.) The song becomes increasingly strident and martial and the boy reveals he is wearing Hitler Youth garb as almost the whole crowd gets to its feet to join in the chorus. We are meant to identify with the old guy in glasses who looks pissed off and just wants to finish his pint in peace but it is hard not to want to hum along – there’s fresh air and sunshine and beer as opposed to the smoke and gloom and gin in The Kit Kat Club. There is a reason why white power bands such as Screwdriver and Saga recorded versions of a song written by a two Jewish songwriters.

This version of Tomorrow Belongs to Me cleverly undercuts any potential identification with the sentiments of the song by having the Emcee manipulate a row of singing, dancing puppets. The propaganda message is unavoidable; the singers are on strings, they can’t escape being moved by the song, resistance is useless.

I’m not sure this is a particularly hopeful message for our own times when proto-fascist demagoguery is rampant but it was certainly a powerful and memorable spectacle. This new production of Cabaret is definitely recommended.

Cabaret is on at The Grand Theatre Leeds until Saturday 7th March.