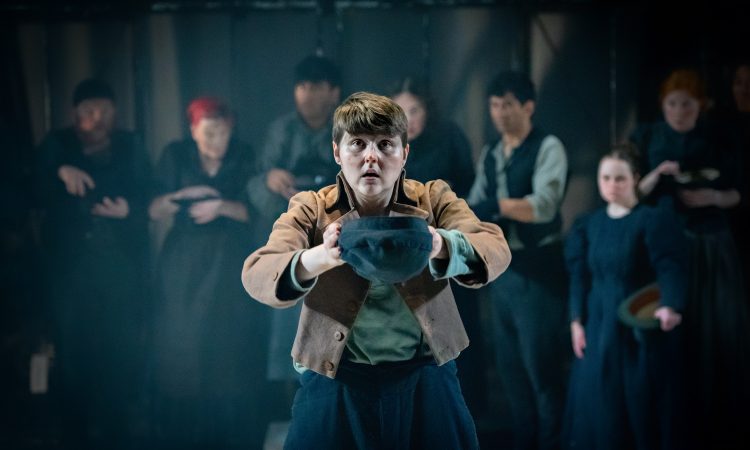 Consider yourself warned … if your only experience of OLIVER TWIST is a sentimental family musical for a wet Sunday afternoon, this gritty interpretation from LEEDS PLAYHOUSE and RAMPS ON THE MOON is going to be a shock says RICHARD HORSMAN

Death in childbirth, child prostitution, violence against women – stripped of the dense Dickensian language in Bryony Lavery’s new adaptation, the themes in the familiar tale of an orphan growing up in a workhouse, abused as an apprentice, running away to London, falling in with thieves and ultimately redeemed by a long-lost relative acquire a new raw edge.

That in itself could be the basis for a striking production – but what if Oliver Twist were also deaf, unable to comprehend or communicate in a society that made no allowance for his condition, and in which there was a distaste for signing and a religiously-inspired drive, encouraged by the ‘experts’ of the time, to force the deaf to speak?

This show takes the partnership between Leeds Playhouse and Ramps On The Moon to a new level. Previous co-productions, like Tommy and Our Country’s Good, showed how it’s possible to integrate actors with a range of physical and sensory disabilities seamlessly into a show.

They introduced Leeds audiences to concepts such as short scenes conducted only in sign language, on-stage audio description and creative, reactive surtitles which now feel a normal part of a night at the theatre. But Oliver Twist does more. By making Oliver (and many of those he interacts with) deaf, it places deafness at the heart of the narrative and gives a new dimension to the tale.

After a powerful opening, with Oliver’s mother forced into the workhouse to give birth, this Oliver Twist takes some time to find its stride. His childhood anguish drags on a bit, as does his journey to London. It’s when he falls in with Fagin’s gang that the show really comes alive.

It was a stroke of genius to make Fagin a female character. The contradictions between caring for the kids in the gang and exploiting them to obtain the necessities of life (and the pretty things that could provide for old age later) feel less marked when she’s a surrogate mother to the youngsters in her domain, and the casting brings a fresh dimension to her relationships with prostitutes Nancy and Luna, and murderous bad boy Bill Sikes.

A stark and simple set is dominated by the surtitle screen. The design is heavily influenced by steampunk, I especially loved the makeover for the motorised wheelchair. There are puppet characters too, notably Bill Sikes’ dog Bullseye but also ‘newborn Oliver’ and ‘six year old Oliver’ – a nice touch. The design makes great use of silhouettes, which are also easier to make out for some people with sight loss.

It’s very much an effective ensemble production, with all the principal characters working together towards a greater whole. Director Amy Leach choreographs the relationships beautifully, and it would be wrong to single out any performances. And that, I suspect, is how the company see themselves .

Likewise the pain and the violence is integral to the show, but often mitigated by taking the victim away from the situation, be that Agnes’ death in childbirth or Nancy’s vicious murder at the hands of Bill Sikes. They articulate their thoughts from afar as the tragic events unfold.

The show ends with a powerful visual tableau that brings together many of the themes, and gives the audience food for thought as they leave the auditorium. Life today isn’t all glorious.

Oliver Twist plays in Leeds Playhouse’s Quarry Theatre until 21 March ahead of a UK tour.