Byron Kitching, aged 16, student at Ralph Thoresby High School, and his Nanna Elizabeth Kitching went to see Of Mice and Men at The West Yorkshire Playhouse …

We were stunned by this striking production of John Steinbeck’s Of Mice and Men. Firstly the stage setting was truly spectacular and captured perfectly the atmosphere of the landscape and times of the story set in the American dustbowl. We have recently read the novella as Byron is studying it for his GCSE this spring/summer, so we both gasped to see the fabulous set and its suggestion of the treat to follow when the play started. The artists had managed to depict vast sun-drenched fields of crops with such a small working space ( well it’s not actually a small working space, but relatively speaking) with a windmill and farm machinery too, the pond which the workers drink from and refresh their sweaty faces, the shared rough accommodation with basic wooden furniture and grubby bunkbeds, Crooks’ barn, the Boss’ office up the metal staircase. And most notably a beautiful old piano, a cello and a guitar.

Then we see the arrival of George (Henry Pettigrew) and his dear friend Lenny (Dyfrig Morris) and we quickly recognised these two characters. Poor migrant workers, tired and hungry, hopeful and uncomplaining. Their clothing was just right; dungarees for Lenny and working jeans and shirt for George. Lenny’s difficulties which leave him unable to negotiate life in the world are beautifully played and his dependence on his friend George is both touching and scary. George bears this well and his loyalty and humanity and survival instinct shines through. Heather Christian (Curley’s Wife) sings low and hauntingly in the background with delicious company from the actor musicians and it was a sound we had never heard before really and it worked excellently. 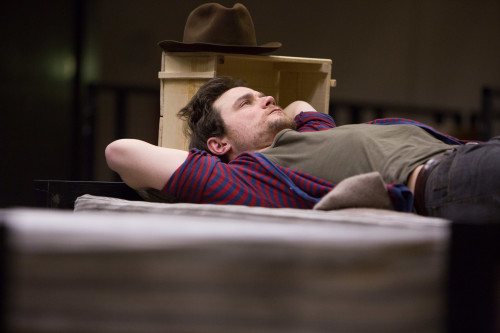 The Boss Whit (Cornelius Booth) appears briefly to make his mark and authority known, but seems like an ok chap. We see him once more later and it is a brief visit to the set again. The other farm labourers join us soon, each character perfect and memorable: Crooks (Kelsey Brookfield) is a black man and sleeps separately from the others and explains the racist oppression he lives with later to Lenny, who may not understand. Slim (Andy Clark) appears as tough, smart, friendly and with leadership qualities. Carlson (Simon Holland Roberts) is a big and solid working man, no nonsense and later shoots the dog – Oh dear. The dear old man Candy (Johnson Willis) is beautifully portrayed with his wisdom, kindness and still hoping for a better life where he will still work hard but somehow with his own home and honest toil he might enjoy some of the fruits of his labour. He plans for this with George and Lenny as they share stories of their hopes and dreams for the future when they will live off the fat of the land. Lenny tells us throughout how he will “live off the fat a the land” with his dear friend George and their new friend Old Candy. George, probably more realistic, is still willing to keep on trying. Curly (John Trindle) is basically a little bully, constantly throwing his (light)weight about. He is the Boss’ Son and treats his wife as badly as he treats the workers. And Curley’s Wife (Heather Christian) is bored, lonely, frustrated, bearing women’s oppression and directionless. Played with exceptional precision yet achingly fluid, we understand her very well, her need to hang out with the guys, her need to talk, and we worry about the tragedy ahead.

Lives and conditions are portrayed well and we were gripped by the action. As the atmosphere to the tragedy builds up, we see George’s constant struggle to keep Lenny out of trouble. He is so innocent but terribly strong and without the ability to control himself when he is touching something or someone nice and soft. This had resulted in the death of several cute animals and a deeply unfortunate woman at their last place of work. Old Candy has a best friend – his old faithful and much loved dog (tribute here to the most talented artists whose fabulous model puppet prop portraying the dog – it works very very well. We loved the dog! ) But Carlson is sick of the smell of the dog and persuades Candy that he should put the dog down and offers to shoot it. He does shoot it and we watch as Candy becomes more and more powerless and alienated from his existence.

Lenny and Crooks find time to bond whilst the others are out for the night. Lenny sees how Crooks sleeps alone in the barn because of racism, but Lenny finds the set up very attractive – a room of one’s own and livin off the fat of the land. His dream. Crooks is a lovely person, honest and patient with poor Lenny. Crooks bears his place in the world with dignity.

Each of the characters are lonely, alienated, uncertain yet they each still hold on to their dreams. Every performance gave this feeling to us. We understand each individual, who they are and where they are at in life. The actors gave real life to the stage setting. You could feel their fatigue, needs, desires, flaws.

Curley soon gets his chance to show his bravado. Curley’s Wife has been around the guys too much, the guys know the danger and tell her to stop, George especially knows the danger given Lenny’s need to hold soft things. We feel her pain and loneliness. But she finds herself alone with Lenny and an innocent exchange ends in her tragic death. Poor Curley’s Wife and poor Lenny. The two performances are incredible, simply perfect. The discovery leads to panic all round and a promise from Curly that he will find and shoot Lenny. Thankfully George finds him first and does what he has to do. Tragic.

I can’t praise the performances enough. Generous actors. Superb lighting and darkness, we even saw the stars that George and Lenny stared up at from their rough beds. The music was unforgettable. The atmosphere perfect. 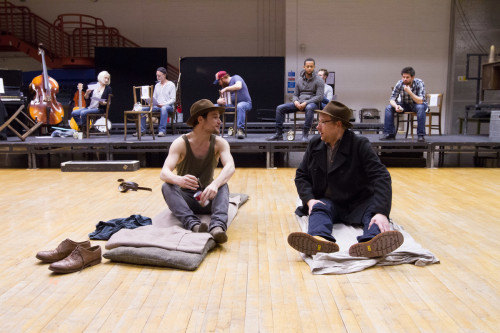 We feel that there are similarities to life today: Migrant workers and their struggle. Women’s oppression – no real choices, sexism, poverty and danger. Crooks’ struggle was during the time of overt and heavy racism yet we have since had the many movements for equality and some victories, so why then is Racist Oppression still with us with a vengeance? Why are people in a wealthy country dependent on foodbanks? Of Mice And Men is relevant.

Thanks ever so much to Hannah Stockton for making us feel so welcome and for looking after us.

The young man near the entrance whose name we didn’t get, apologies, who arranged for us to have a “box”!

We saw many famous people too.

Thanks to all involved at West Yorkshire Playhouse.