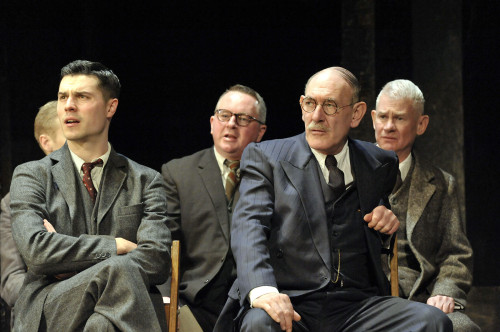 Almost a week after the Iron Lady’s death, Lee Hall’s play, The Pitman Painters, makes a timely stop at Bradford’s Alhambra during its UK tour where Leo Owen catches the show …

Revisiting the mining setting used in his West End hit, Billy Elliot, Lee Hall casts pitmen as the leads in this equally exhilarating show, inspired by William Feaver’s book of the same name. The Pitman Painters tells the true story of a group of pitmen who employ an Art appreciation teacher to travel from Newcastle to Ashington to teach them the “secret of Art”

The play opens with shocking mining facts appearing on a projector screen (the average shift is 10 hours long…) and a grey-suited all-male group bickering with Nicholas Lumley dominating as George, warning the others: “self-improvement doesn’t come cheap”. They represent The Workers Educational Association and
are more interested in “Introductory Economics” than Art but couldn’t find a teacher.

When their tutor (Louis Hilyer) finally arrives, his clipped accent and RP dialect comically contrasts with their Northumberland lilt and it’s soon revealed none of them have ever heard of Leonardo Da Vinci: “Is he the one that did the cat?”. Although Jimmy (Donald McBride) has the strongest accent and some jokes do rely on misheard pronunciation (“peonies” –Vs- “ponies”…), differences in outlook and lifestyle lead to some funny misunderstandings too. Faced with the prospect of trying to create a piece of art, George preposterously warns their teacher, “No-one is doing any art in this class.” Instructed to try to “feel” a painting, one pitman takes things literally, saying “It’ll feel flat.” Later speaking to Modern Art enthusiast, Helen Sutherland (Suzy Cooper), about their work Jimmy says, “You’ve come to the right place pet – most of these were done this week.”

While straight-talking, almost childlike Jimmy triggers much of the humour, Harry and Oliver are the more sympathetic characters. As a dentist, Harry (Joe Caffrey) is belittled and derided by George for not being in proper work (i.e. mining), despite clearly being one of the most intelligent among their number. His backstory is one of the more touching, alongside that of Oliver’s (Philip Correia) who reveals that his mum left when he was a young boy and that both his dad and sister’s boyfriend were killed in the pit. Mini-monologues spoken by Oliver and Jimmy also reveal the appalling conditions in the pits and show legal guidelines were often ignored with boys of ten being put to work. Although all Hall’s characters are well-written and believable, Oliver’s situation and strong desire to better himself make him one of the most likeable as we watch him strive to study Art independently outside of the group and hear how he passionately painted all night before releasing it was soon time for work.

The groups’ paintings highlight appalling economic conditions in the country when the play was set while their thought-provoking discussions cleverly educate viewers about the meaning and purpose of Art. “Art is about making things possible that weren’t there before,” says Oliver about a Ben Nicholson (Riley Jones) painting. Comments on perspective are interesting and the subjectivity of art appreciation:
“Art is not about privilege, money or doing things the right way… Art doesn’t belong to anyone… real Art is something shared…You transform who you are…”

Although the play is long, time moves quickly thanks to Hall breaking up the story into a series of short scenes, punctuated by sound effects and lighting to represent the passing of time – flashing/red lights, black-outs, sounds from the pit, air raid sirens… Through projected sub-headings that perhaps reflect chapters from the source material we travel from the gardens of Rock Hall to Newcastle Central Station, London and Edinburgh’s Royal Academy of Art. During “The Visit” a nude model’s (Catherine Dryden) arrival coincides with the only other female cast member’s first appearance (Helen Sutherland). Group member’s paintings are projected onto three screens in different sizes and angles as the merit of each is debated.

In Hall’s play the dangers of mining merely act as a backdrop with the over-riding mood of the play being inspirational and upbeat. The second half is more poignant with photos displayed of some of the original Pitman Painters and projected titles telling a surprisingly sad ending to their story, accompanied by the Pitman’s hymn. The pairing of Director, Max Roberts with Lee Hall is clearly a winning formula for Production company, Live Theatre who, in Pitman Painters, have created their own piece of performance Art that successfully educates, entertains and moves its viewers.

The Pitman Painters shows at Bradford’s Alhambra between 15-20 April 2013 before continuing its UK tour: