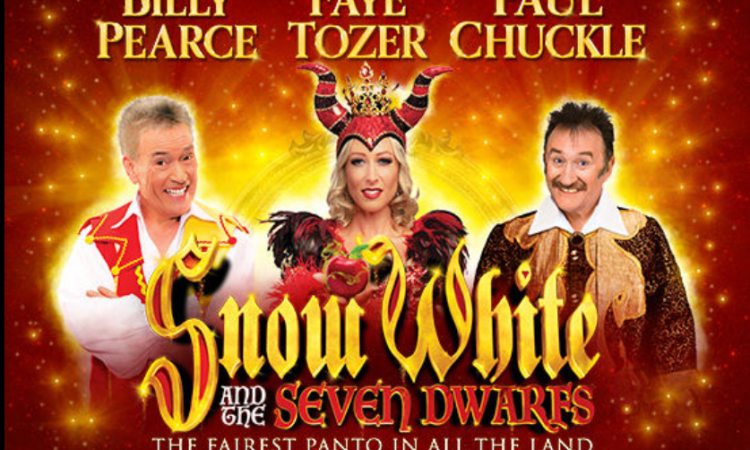 CATHERINE SIMES went to her first panto in years (Oh yes she did!) Snow White at Bradford’s Alhambra.

It’s that pantomime time of the year and, appropriately enough, snow greeted us on arrival at Bradford’s Alhambra theatre for Snow White and the Seven Dwarfs, along with Santa and a school choir. How much more Christmassy could you get?

Bradford’s Billy Pearce panto is famous in these parts. The comedian returns for his 21st show in the city, this year joined by Chuckle Brother Paul and Faye Tozer from Steps.

I haven’t been to a panto in years. There’s probably a very good reason for that. I have no kids and am fairly cynical at the best of times… let’s just say this panto was not aimed at me.

I took my mum, so I’m going to leave most of the review to her:

“Not a Tragedy….but a wonderful evening with much mirth, music and a Strictly competition thrown in for good measure.

Throw in seven dwarfs with robust knees, the delightful sunbeams,  a full troupe of dancers and brave members of the audience who volunteered to be Goldilocks and the Three Bears with protective bin liner costumes and you’ve got yourselves a pantomime.

The Alhambra panto wouldn’t be complete without special effects in the form of a magic mirror, a dreadful dinosaur and Billy Pearce practically sailing above the audience on a scooter.

Don’t forget to rehearse your Steps routines – you may need them for the grand finale which ends a smashing night out.”

What I did like? I loved the dwarfs ably played by The Magnificent Seven, I loved their costumes, especially the Rod-Hull style animals. I‘d have been happy to see more of the dwarfs.

Amazing sparkly sets, audience participation and Faye Tozer as Queen Lucretia brought a bit of style, glamour and for me much needed sarcasm to the proceedings. “Who is the fairest in the land? … well me but I haven’t got much competition have I? We are in Bradford after all”. Evil personified.

It’s wonderful to see the theatre full, great to see the kids screaming those well-worn lines with such enthusiasm  – overheard on the way out from one of the mums, “I don’t think I’ve ever heard Jake laugh so much”.

Billy Pearce definitely knows his audience and as always the Alhambra does Bradford proud.

Snow White and the Seven Dwarfs runs until 26 January 2020.