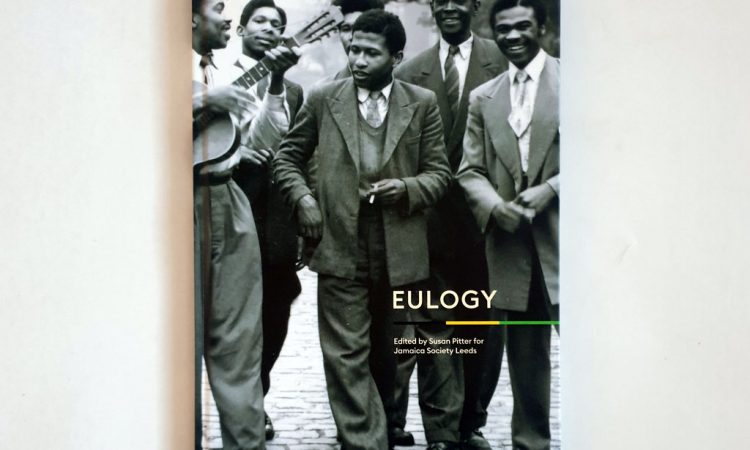 Jamaica Society Leeds’ Eulogy Project at the Central Library was the most popular exhibition in library’s history. A new photo book, capturing stunning images from the show, aims to create a permanent legacy to the lives and journeys of first generation Jamaicans within Leeds. The project’s curator and book’s editor, SUSAN PITTER, talks to VANESSA MUDD.

When Susan Pitter talks, it’s from the heart. The curator of the Eulogy Project exhibition, an ambitious and timely celebration of the lives of first generation Jamaicans from the forties on within Leeds, knew there needed to be a permanent record. “ It was important to produce a book because that is a lasting legacy,” she says. “The exhibition, as wonderful as it is, sits in people’s memories and hearts; people remember how they feel, what they saw, but it’s temporary. Having something on paper, where we can touch and turn pages, read and go back to: this can resonate in a different way each time.”

The book is a beautiful artefact, a fact recognised by dignitaries speaking at the launch. It’s already creating its own significance. “It’s being described as an heirloom,” says Susan, “especially for those whose loved ones are in it. I don’t think I’d really thought about that until the launch and people had it in their hands. I could see mums, dads, grandparents, great, great grandparents, be moved in the same way as they were in the exhibition. I didn’t expect that because the exhibition opened up a whole raft of emotions. This was from people whether they were connected to the people in Eulogy or not, from Leeds or not, from overseas- the exhibition promoted such emotion. I wasn’t sure the book would get the same response.”

The book elicits strong feelings for Susan too: “My parents are in there. I had my moments putting it together. Seeing a photo I’ve seen all my life in my house, when I unwrapped it for the exhibition I was in tears. The same thing happened with the book, which took me unawares. I wrote everything! I wrote everything in this book!” What was it like to write about her family? “ Writing about my parents was the easiest because I knew the facts but hardest as it was about my heart and I miss them terribly.”

She tells me that her family have seen the exhibition, including her grandchildren, niece and nephew. I wonder if they understood the full picture? “Yes I think they do, but I don’t want to influence, I want them to read it for themselves. They notice little things like the medals (‘Wow that’s from 1944’) and the MBE, (‘Did the Queen give that to Mr James?’). The child’s view gives valuable feedback.”

Cities up and down the country have their own archives telling the stories of their communities. Within these those of Jamaican and other black or commonwealth communities are either under represented or invisible. For Susan, the power of the Eulogy exhibition and the story reflected in the book has a wider purpose. “It’s important for people in the book to look like me (and) my grandchildren. The book is evidence of what has passed. It’s a statement, we don’t have to justify it.”

“I’m confident that the story of my parents’ generation has only touched the surface. It’s important to me that if I’m going to tell a story about Leeds, the things that come to mind aren’t just Leeds United, the Town Hall or the Carnival.  It’s also the story of my parents’ generation: the seminal moment when they came here and their contribution – building the NHS, making sure Leeds was on the move in the transport sector, in engineering – making sure the city was built. It’s easy for me to say – I keep saying it – but they built this city. Some people say it’s a cliché or What about others? but the fact they did this doesn’t take away from what anyone else did.”

Demand from overseas has meant copies of Eulogy are being sent to Jamaica. “It’s going to the Prime Minister, the National Library of Jamaica – who are partners on Eulogy. They sent imagery of the Jamaica that was left behind. That’s also why we had the map. We get to say we’re from Leeds and which part. They will have been asked a million times where they were from, but they will only have got to say from Jamaica. I thought it was really important to let people know they came from a specific place with a name. It means something.”

“It’s important that the book goes to Jamaica (I keep wanting to say ‘back to’) as these stories aren’t fully known. Why would you write back to your parents and tell them you’re experiencing abuse, stares etc? They may have said it was cold and grey, but not included the other negatives. This is a common element of the Jamaican diaspora – those back home say, ‘We just didn’t know.’ This is an opportunity for us to share what happened.”

The popularity of the exhibition and now the book reflects that all history is important. “Here in Leeds – so many people who saw the exhibition had no direct connection. Whether they were white, Arabic, Irish, Canadian – we even had visitors from Australia – the story resonated in some way. Because, as a human being, you can feel what it was like, you can imagine what it was like. You don’t have to be in their shoes to try and walk in their shoes.”

It’s an unfair question because it’s all interesting and beautiful, but, apart from her own family, what are her favourite parts of Eulogy? “They are all very, very special. This is a tricky question! Can I have more than one? I’m moved by both people who did great things and those who just lived ordinary lives. For example, a woman called Grace (who everyone called Francis) Williams. She worked as a chef in the NHS at the LGI. When she was interviewed pre-Eulogy, she recalled how she was called ‘monkey’ and ‘baboon.’ She would go to the toilets and cry and pray. She would say, ‘Father I’m just asking you for courage.’ It’s in the book and it still gets to me.”

There are a lot of strong women in the book. “Absolutely! And not by accident at all! This is the same for any community, a lot of the time our stories are about the men. Certainly in my family it was both my mum and dad who got us where we are.”

“Then I’m very struck by those trailblazers like Veryl Harriott,  who impacted on laws. She was supporting young women in the sixties on birth control and a woman’s choice. To be involved with the British Pregnancy Advisory Service at that stage – an amazing woman.

“The RAF folks blow me away every time. It is an utter privilege that one of them, Glen English was my first mentor. He started the city’s and the country’s first housing associations to meet the accommodation needs of black people the launch I quoted some of the things he said in the fities –around black and white communities – which are so relevant now and intensely profound.”

She turns the tables by asking me for my favourites. I agree about the RAF members, who were prepared to give their lives, yet the country doesn’t commemorate or say thank you.  But its the NHS staff connection that wins out. A West Indian nurse double fed me to health in my first weeks as a premature baby. Susan nods, “Yes, I can’t tell you how many people have said this: ‘It was a West Indian or Jamaican nurse who saved me.’ So many times people say they were premature babies, it’s very profound.”

Eulogy is being distributed in Leeds by the excellent Petals and Stitches in Chapeltown and Colours May Vary in the centre of Leeds. “It’s really important that it’s independent stores where people can go and talk to the people there about it. Colours May Vary are selling it online too and have many orders form overseas. They’re also getting the responses from customers seeing people they know in the book. That’s more gathering of stories. In CMV some of the first purchases were the children of RAF men. I’m really happy that this is the approach we took. It will be in Leeds Central Library and other branches. We are making links with schools: some have already been into Petals and Stitches to purchase.”

Is the book the final chapter in the story? What comes next? “Making sure the book isn’t the final chapter,” says Susan. “We’ve scratched the surface of these stories. We haven’t told our parents’ generation story fully yet. I’d love to do that. Building on themes that have come out of the project and further building on that… I do have a cunning plan!”