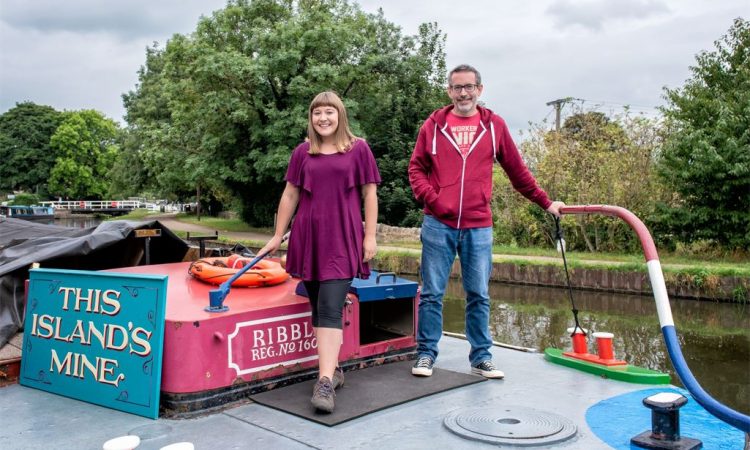 There are some theatre shows which are pure spectacle as we, the audience, gaze in on the action through the fourth wall. There are some which are site-specific. There are others where we are expected to participate – oh yes there are. Then some are a bit different. RICHARD HORSMAN experiences This Island’s Mine (Photo: Ant Robling Photography)

This Island’s Mine is less of a show, more of an experience; the location is both fixed and moving, as a barge tours to different locations along the northern artery that is the Leeds Liverpool canal (although it stays in one place during performances); and the participation is a damn sight more intimate than panto, as will become clear.

First of all our ‘stage’ is a barge called the Ribble. Not a pretty canal longboat, but a tough old working transporter that once shifted the cleaner types of dry cargo (think sugar rather than coal) coast to coast. She was sunk during the Liverpool blitz, salvaged, patched up and put back into service without fuss.

And already we’re into telling stories of this remarkable waterway before you realise it. We haven’t met the actors yet.

They are Claire-Marie Seddon (who recently played Lysander in Front Room Productions’ gender-swapping Midsummer Night’s Dream at Temple Newsam) and Steve Scott-Bottoms (who also wrote This Island’s Mine).

Thing is, you’ll probably meet them before the performance starts, casually dressed, chatting perfectly normally to the little knot of audience members on the canal bank. You could easily assume they’re part of the audience as they introduce themselves as their real selves, together with the show’s director Simon Brewis, and the smalltalk continues as everyone climbs aboard (it’s a big step, even with crew assistance – stout shoes and a positive mindset required).

Everyone gathers round the Ribble’s sparse table, right in the heart of the hold. The bow looks a bit more homely but gathered under the tarpaulin in the harsh glare of a single LED light is a million miles from the red plush of the Grand.

Claire and Steve have learned everyone else’s names by now as they sit at opposite ends of the table .. and become, on cue, Barbara and Daniel. Barb and Danny. Not a couple, two lifelong friends who grew up together in Dockfields, an unglamourous bit of waterfront in Shipley that incomers now prefer to identify as “near Saltaire” because that’s nicer. They talk about growing up.

Then it all becomes a bit more surreal. A map (well, a roll of paper with a river drawn on it) is unfurled, and the audience are invited to join in adding features … a railway line, as well as the canal we’re sitting in. Items from Barb’s shopping bag represent other elements – a ball of wool for a mill, Custard Creams for the terraces, Bourbons for the posher houses, with each added element prompting another anecdote about the rise and subsequent decline of the Leeds-Liverpool’s fortunes.

An hour on and we’re up to date, except it’s not over.

Barb and Danny gently encourage audience members to add their own stories of what the canal means to them. Yes, it’s a self selected sample and to be fair this show will naturally attract those with an interest in waterways, but what was striking is that every single audience member had something to add to a corkboard map of memories which will become a museum exhibit when the fortnight of touring is over. For me, it just reinforced the importance of the Leeds Liverpool as an artery running across the North, carrying the lifeblood of the communities it passes through, right at the centre of so much of our region’s physical and cultural development over two centuries.

The two performers bring the story to life and integrate the participatory elements in such a gentle and natural way it’s hard not to be beguiled by the experience .. you feel as you step ashore from the Ribble you’ve made new friends, and enjoyed an insight into an important aspect of our shared heritage.

The production is backed by an organisation calling itself DNAire (see what they did there?). “Developing the Natural Aire” (I still think they worked backwards from the acronym) is a £2.35m joint project by The Aire Rivers Trust and the Environment Agency paid for by the Environment Agency, the National Lottery Heritage Fund, Yorkshire Water and Craven Council.

This show is a bit of a shop window for that, and is at heart a concept piece which is deftly executed, with a great deal of warmth and humour throughout. On for a fortnight at different locations along the Leeds Liverpool canal. Catch it if you can – full performance schedule as follows, further details here: