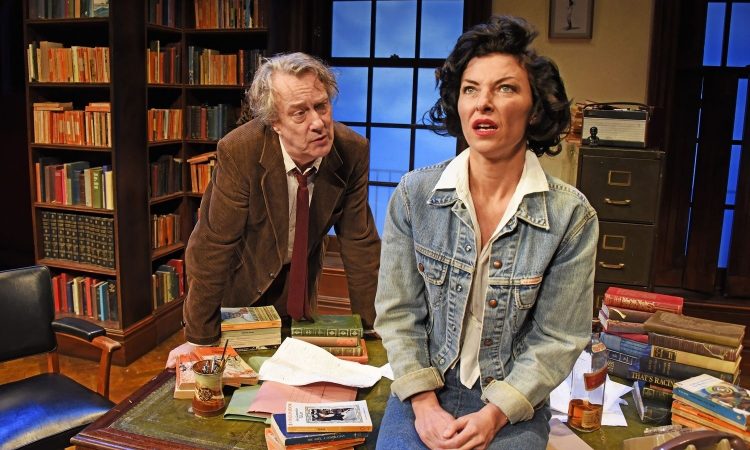 EDUCATING RITA arrives at York three years after it began touring, with STEPHEN TOMPKINSON as FRANK and JESSICA JOHNSON as RITA. Thirty years after she saw the film, Rose George settles in for the ride.

What can make this theatre-goer’s heart sink? The words “no interval,” followed by “90 minutes”. My heart shouldn’t sink at all, given the novelty of going anywhere and doing anything: I am on the cautious side of Freedom Day, still checking data like an obsessive. So I understand that no interval reduces mixing, but I wonder at the need for that when only half the audience are wearing masks.

Enough of that. I settle down, masked, and prepare to dampen my niggling thought that 90 minutes stuck in a seat is a long time and god I hope my bladder holds up. York Theatre Royal, mind, is a grand place to be stuck in, with its glamour and grandeur. And who cannot look forward to 90 minutes of Willy Russell’s words, in the form of Educating Rita, a play that someone of my age will remember clearly and with affection as a very fine film? Frank the academic and Rita the hairdresser: one of the best odd couples in literature, are here played by Stephen Tompkinson and Jessica Johnson, one of whom gets bigger billing and the other gets that odd “introducing” category, as if Johnson has never ever done anything before and comes to the stage fully formed.

The set is bookish. Books everywhere, a surround sound of books, a book version of Japanese forest-bathing. Tompkinson looks the part, dishevelled, with a (lack of) haircut that used to signify both drunken academics and the new homeless, but now also means “I’m living through a pandemic”. As there’s clearly no way this set can be fundamentally changed, my mind, still poorly prepared for the long haul, is now wondering how on earth that film can become this play, confined to this set and to two people.

It can, though any perfect marriage of the quality of the words and their delivery takes time to cohere. Perhaps my theatre patience is too rusty but I am distracted first by Johnson’s pretty poor attempt at a Liverpool accent, which starts off fine in a sentence then veers off into vowel sounds that have no place anywhere near the Mersey. It is distracting, and I don’t want to be distracted from Russell’s wit, because it is still brilliant, 30 years after I saw the film. Tompkinson, meanwhile, too often thinks shouting is the same as projecting, but it isn’t. Still, if I can ignore the verbal irritants, I can concentrate on the fizzing, splendidly physical nature of Johnson’s performance. She moves, all the time, perching on chairs, nipping around the set, inhabiting it noisily. It is a beautifully vivid performance in its exuberant dexterousness (also, she must be very good at yoga). Stripped of other characters, this Educating Rita is intense, intimate. I wonder how it did when it was staged on a cliff-top, early on in this three year stop-start tour (it was meant to celebrate Educating Rita’s 40th anniversary but now the play is 42).

Even so, after 40 minutes, I begin to wonder how I will find the patience to sit still for the next 50. Luckily, Russell was ahead of me, because this is where the drama deepens, as Rita leaves her marriage and discovers student life. Now the glorious physicality of Rita and her new confidence only emphasises the growing disconnect between her educated self and Frank, and you wonder whether you need to pick a side after all, between this newly pompous young woman, parroting crit lit nonsense, and the deteriorating infuriating but still wise Frank, grasping at the purity of the uneducated Rita and despairing at the vacuousness of this “educated” one. You don’t need to pick a side, of course, because although each character is equally infuriating, they are never lost. Russell gives them both incandescent insight, with glints of pure wisdom amongst the jokes, with funny sadness and the unfunny kind too. (Rita’s posher accent poses fewer problems for Johnson, too, which helps.) There is genuine pathos and wisdom here, in Rita’s new self-awareness that has replaced the old new self-awareness that she first found in books, then liberation from drudgery. She is flawed; he is definitely flawed, but I root for them both. By the final, beautifully affectionate scene, I’ve even forgotten my bladder.