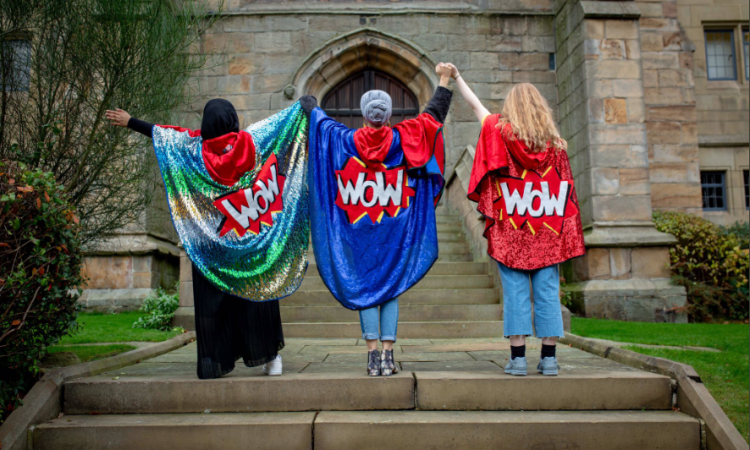 As soon as I walked into Kala Sangam on the second and final day of WOW Bradford 2018, I knew instantly that I had encountered an institution, with masses of women exploring the various display stands at ease, talking to each other with great smiles on their faces. Laughter and joy filled the air, and it was only 9AM. There were men about, but the Bradford lasses knew that this was their space and their time, and so relished in it.

The first event I went to was a WOW Views on the News panel with four ladies I had a great amount of respect for even before seeing them open their mouths. Chairing was The Kersten England, who just so happens to be the CEO of Bradford Council, and she was accompanied by journalism powerhouses Aina Khan and Saima Mir (it’s honestly a shame I can’t put a heart-eyes emoji here), and last but not least Mandip Sahota, who signed up last-minute but offered key insight as a ‘strategist to change-makers’.

The Sunday papers were scattered about them, and it was no surprise that the bemired Daily Mail was the first to face the fury of the panel’s quick wits and critical glare. I sank back into myself seat revelling in these women systematically unpacking the irresponsible journalism that acts to reinforce the misconceptions about people different from ourselves, falsities which actively promote division amongst us. Aina spoke of the modern-day newsroom still being dominated by greying, middle-class white men. No wonder we cannot trust even our most steadfast of liberal publications to properly represent a diverse population, particularly those subjected as victims or villains in headlines nationwide.

What can be done? Two clear and very cool messages came out of this talk for me: the importance of echo chambers, to cultivate strong arguments when venturing out of them, but also for providing vital respite from the fighting and hatred; and the power of storytelling, especially on a local level, to demonstrate the reality of the human experience without the spin of a corporate-backed and money-fuelled agenda.

The next talk I attended was a Listening Through The Decades panel featuring ladies representing six decades! It’s very rare (for me at least) to be able to feel a tangible solidarity and sisterhood permeating the atmosphere but that’s what was happening here, from start to finish. It was a pretty magical and wholesome-as-heck hour that I won’t forget any time soon. Each speaker related her story with examples of rebellious acts done in the face of misogyny, and offered sage wisdom about what the current juncture of their lives had taught them.

The resulting messages developed from a toddler, bold in her exclamation, yet unphased by the expectations that will soon be put on her shoulders, to a real veteran of womanhood advising that resistance comes in all forms, including in educating ourselves. Lessons in-between included the importance of finding our voices – learn to stand up to bullies, stop apologising for being who we are, give ourselves permission to say no, and remember to have fun and not give in when people try to stop us! There’s so much more I wanted to write here because it was all so inspirational but my thanks to Iram, Miriam, Nabila, Liana, Rachel, and Sue for your stellar contributions to this talk – you’re all awesome.

I attended a talk from very important organisation Mend (Muslim Education and Development) who startled the audience with lesser-known statistics and facts about a trend on the rise – Islamophobia. Unfortunately, the talk was a little rushed and so there was not enough opportunity for discussion or reflection here – a subject of such importance really should take centre-stage somewhere, providing its attendees with an opportunity to grow and learn. However, MEND are very active in their outreach and provision of resources and so if you would like to learn more I highly recommend you check out their website.

Passports and Privilege was a session just as harrowing as the previous one. I looked on and listened in horror to a panel of women, with immeasurable strength, who are right-now subject to various immigration restrictions. Comfortable (ish) in my British Citizen status, I hadn’t the foggiest of what these ladies, and several members of the attending audience, are put through just to be in the UK; charged, penalised, pushed from pillar to post. A low simmer of rage stirred among the ranks at the blatant disparity between the manure scatterings of political speeches we are bombarded with on a daily basis, and the actuality of these people’s lives. They all have incredible stories to tell and I implore you to learn more – they are Nyarai Marema, Michelle Wren, Agnes Harding and Vie Lusandu.

WOW Bradford 2018 was brought to a close with Women Who’ve Won featuring a commendable cast of speakers. Ailbhe Smyth is a punk-rock-as-owt amendment campaigner who was on the front-line in repealing the 8th Amendment. In good company, Ezdihar Abdulmula and Asma Elbadawi are two incredibly badass women basketball players fighting for the right to wear a hijab on the court, slam-dunking in the face of the Arabic saying ‘almar’at almuslimat la taqfiz ‘iilaa al’aelaa wal’asfal’ (Muslim women do not jump up and down…please correct me if I’ve got the phraseology wrong). Alongside them was Fiona Broadfoot, a prostitution abolitionist and survivor, not to mention a quintessential Bradford lass, who doesn’t mince words and takes no shit – she blew us all away with her story and her strength. The talk was chaired Harriet Wistrich a glorious human-rights lawyer championing the voices in Bradford so often silenced by red tape and other garbage.

The highly compelling nature of these women’s stories had a clear resonance with the audience, and the optimistic ambience soon took a turn as enormously moving and devastating accounts from the audience followed as soon as the discussion was opened to the floor. After feeling all the emotions it is possible to feel over the course of the day, this tipped me right over and had me hankering for a pint. Nonetheless, it was a poignant end to a deeply evocative and wonderful celebration of what it is to be woman, in pain and in triumph.