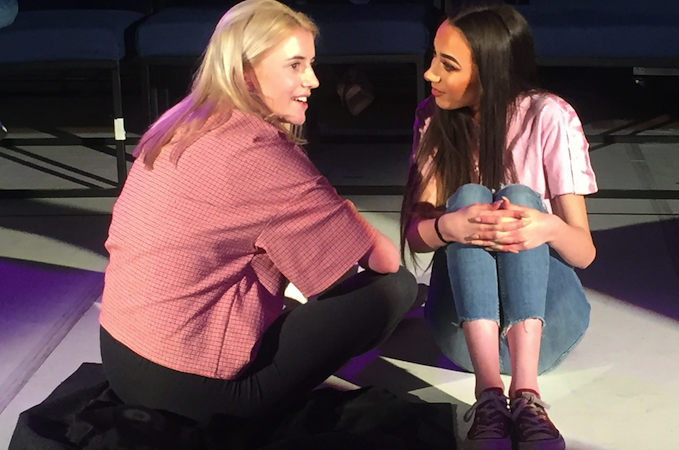 I watched the first ever Youth Theatre performance way back when, and have seen a couple of others over the years, but other commitments have mostly got in the way. So I was über (Isn’t that what the kids say?) excited to be seeing West Yorkshire Playhouse Youth Theatre’s latest pieces and I wasn’t disappointed.  It was wonderful to see how the youth theatre performances had developed: Blank could quite easily hold its own on the main stage. I am an advocate of youth theatre pushing boundaries up there with the professionals and I always love to see the new writing that NT Connections gives us year after year.

Blank, written by Alice Birch and directed by Gemma Woffinden, was an hour’s worth of fast paced, interlaced stories.  Intimately performed in the round, Woffinden had incorporated some great alternative techniques – the actors conversing with the audience before the piece started, breaking the fourth wall by having actors place props under audience member’s seats, calling on members of the audience at some points throughout the performance – which I loved

The balance of naturalistic emotions, characters, themes and relationships combined with non-naturalistic techniques throughout the piece was a breath of fresh air. Woffinden and the cast showed that youth theatre can be different and dare step outside its comfort zone. All too often I see the standard kitchen sink drama dragging on for hours, with young actors just remembering and saying the lines.  But there was nothing ‘blank’ about these young performers. They have created characters with depth and perform with confidence.

Woffinden modestly ascribes Blank‘s success to the brilliant writing of Birch. The play, sixty stories (of which we saw a snippet) with no named characters, is written beautifully, but Woffinden has taken some chances and they have paid off. She has chosen the stories well and fitted them to a context that works, the subtle lighting and backing track further complementing the piece.

When They Go Low, written by Natalie Mitchell and directed by Fiona McCulloch-Exley, has been developed with the community outreach team. A mix of new and experienced young performers worked well as a team and should be proud of themselves.

The text was simplistic with an unoriginal theme. I could see the intent and the relevance of the feminist message but the basic writing and structure made the job for some of these new actors and the director even harder.

There were some staging choices I disagreed with too – the use of the bed was unnecessary. It seemed to be repositioned and used for the performers to stand on. I thought this might be  symbolic, but that didn’t seem to be the case.

The storyline got lost along the way. The piece began with the theme of pictures of a young girl at a party going viral and circulating around her school. Having worked in schools for many years, how the school dealt with this in the play was completely unrealistic, so I was a little perturbed from the outset. The piece then moves on to focus on a male and a female character each vying for the position of student captain, campaigning and ultimately uniting – kind of!

The performance did include some different elements like a live band, I am always an advocate of live music in a performance, but levels were too high, sometimes drowning the projection of some of the newer performers. Nor did the genre of the music enhance the performance for me. The use of shadow imagery and puppetry would have been brilliant, but again the staging of this lessened the impact.

Let’s not forget the aim of this project is to give professional training and experience to young people from a range of backgrounds; to bring young people together to perform and succeed, and this is what they did!