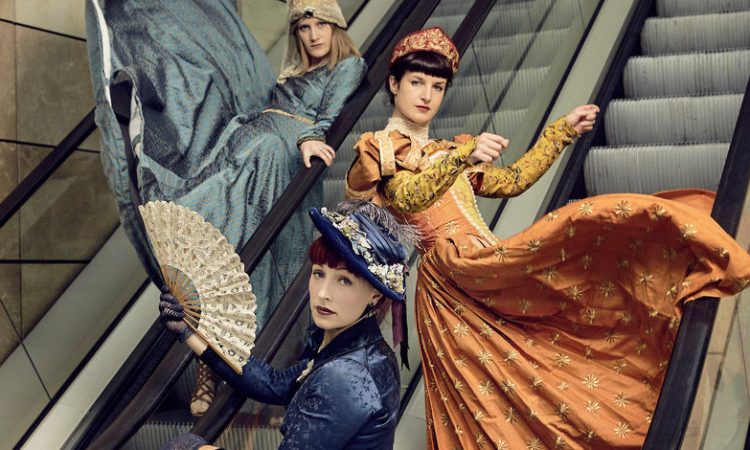 You don’t have to be familiar with Anton Chekov’s Three Sisters to understand what’s going on in RashDash’s imaginative staging, says JESSICA PEACE …

When the character of Masha reads aloud a fake review (of RashDash’s Three Sisters after Chekov) that is so on the mark, it is a while before I get the joke. The review describes the play as ‘radical.’ It’s difficult to tell if this means that RashDash think it is, or they are mocking it being labelled as such.

This production may be intelligent, wild, punk and funny – but radical it is not.

RashDash is Abbi Greenland, Becky Wilkie and Helen Goalen, all of whom give remarkable performances and display great skill as actresses and musicians. Along with musicians Chloe Rianna and Yoon-Ji Kim, here are five extraordinary women, being, well … extraordinary.

When the three actresses change costumes on stage, stripping down to their pants, I did think I was about to witness sex cloaked in feminism, but it continues throughout the play and by the end breasts have been normalised. Perhaps soon we’ll be taking off our bras without being arrested?

Playing Masha, Greenland is the freest in her role and is electric throughout. Wilkie, as the understated Irena, exhibits a rare quality of grace and exquisite comic timing. No one will ever throw a pie on the floor like her. With the more difficult role as Olga, the most vacuous of the three siblings. Goalen manages great sensitivity and actually draws out most laughs.

Rianna and Kim remain onstage for most of the ninety minutes performance time, their expressions of indifference one of the best parts of the production.

The play knocks the ‘classics’, the ‘canon’, the ‘old white male.’ A handout is passed out before the show which contains the following passage: ‘If they’re not for me, then why do they get staged so often? … How can I make them for me/ about me/ mine?… What in this play speaks to me of my experience of the world?’

It’s not specific enough, though perhaps that’s the intention? Is this a strange homage to Chekhov or simply Chekhov bashing? It feels like the latter.

I assume by the ‘classics,’ they include the Greeks, Shakespeare, Ibsen and the rest. Well, the general argument for their constantly being produced is because human nature doesn’t change; and from a feminist stance some of these ‘dead, white males’ show women in a more powerful, intelligent and animal way than writers manage today – Antigone, Portia, Nora …

RashDash claims its work is  ‘about big political and social phenomena’  and about ‘Us.’ Well, it certainly centred on the personal with a few gestures at the political: the  words ‘fuck’ and ‘cunt,’ a critique on materialism, Tinder and social media. The tired references to the ‘white man’ and one mention of  periods, were not particularly progressive. Wilkie probably got the most political line: ‘…and the trains are so expensive.’

I am concerned that the ambiguity and constant open questioning leaves the production as something less complex and more superficial than I imagine it is. RashDash are exceptional. They could just push it a bit further, beat a bit harder. They are certainly capable.

Three Sisters by RashDash after Chekhov is at The Yard in Hackney, London until 9th June 2018, then the Tobacco Factory Theatres in Bristol (12th – 16th June).