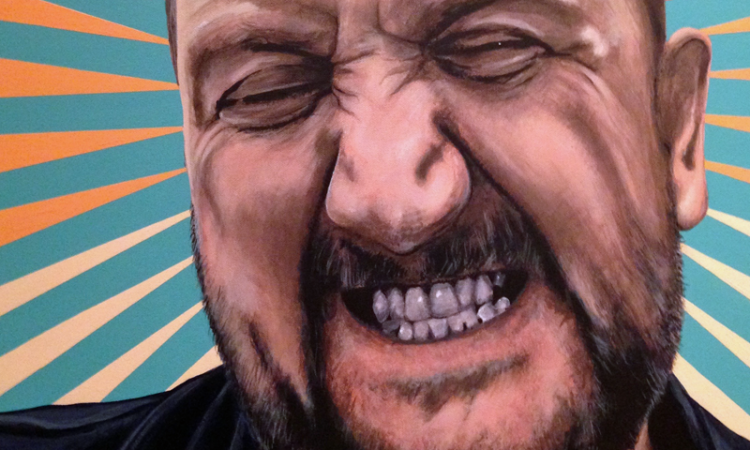 Hull’s finest RUSS LITTEN talks to NEIL MUDD about his love for brevity and why nihilism has outlived its usefulness… Contains fruity language. Obvs.

“A short story by its nature is a little snippet of urgency,” Russ Litten tells me. “If you’re marginalised in any way, then every day’s a bit of a fucking drama, isn’t it?”

Short stories are the Hull author’s first love, though his collection We Know What We Are has been ten years coming.  “My first book Scream If You Want to Go Faster was supposed to be a book of short stories and it was my agent who got me to turn it into a novel,” he says.

Switched onto them at an impressionable age by reading the master of the form, Raymond Carver, Litten admires short stories for the brevity and immediacy writing them affords. “They’re a bit like songs really, and it’s a bit like making an album. I’ve noticed I don’t really write anything set in the past.”

Most of the stories in We Know What We Are were written last year when Hull was UK City of Culture, not that its band of outsiders and black economy misfits would have noticed the celebrations or cared that much.

“I think it was important to have a book where people didn’t mention the City of Fucking Culture ™ at all,” says Litten. “For a lot of Hull people, it just sort of passed them by, or it wasn’t their most pressing concern.”

A standout at last year’s North Atlantic Flux Festival with his music partner Steve Cobby, Litten shared the frustrations of Hull’s local artists at having their home city handed back to them by guns for hire from outside.

“There was almost a sense of I wish they’d fuck off, so we can get back on with what we were doing before,” he says. “Don’t get me wrong. I really enjoyed it. My kids enjoyed it. It was great, but as far as I’m concerned there’s still loads of stuff going on, it’s just that the BBC aren’t here dictating to us how to fucking do it.”

These then are the authentic stories of Hull in 2017, those which the City of Culture either forgot about or ignored. Few writers are as able to document the hard-scrabble precariousness of their characters’ daily lives as the sardonic, potty-mouthed Litten. These are saucy postcards from the edge.

Most of the stories are based on things that actually happened to Litten or to friends he knows. “I used to see that blind Goth girl [in The Light that Lights the Dark] walking round Hull years ago. It always intrigued me, a blind person being a Goth. It’s such a visual thing. It’s the old ‘What ifs?’ isn’t it?”

A few years ago the writer had an epiphany of sorts: “I realised I’m really fucking sick of post-modernism and nihilism. They’ve completely outlived their usefulness,” he says. “I really wanted to bring a little light with this collection of stories. I think people are essentially good and the world can be a fucking beautiful place. I’m an idealist – and you know what they say about them – but I think you’ve got to be, given the horrific fucking state of the world at the minute.”

By and large spiky, resentful, unapologetic, Litten’s characters find redemption through random acts of selflessness. The misanthropic potato delivery man of Last of the Redskins advises his young assistant to get out while he still can: ‘I remember walking out to the wagon one day and thinking fuck me, I’m fifty fucking nine. How the fuck did that happen?’

“I really enjoyed that job, delivering tatties with that old guy,” recalls Litten. “It’s an affectionate portrait of all the fucking mad bastards you used to meet, driving round. It was like the Wild West, all these people in shops that hardly anybody ever went into. They were all like Trading Posts. People going slowly mad.”

It’s an allusion echoed in the collection’s striking black and amber cover depicting a defiant teenage lad in full Native American head-dress and football colours. “The cover is down to a line from My People Come from the Sea, that thing I did with Cobby – ‘My people are stoic like Iroquois’ – and that’s why he’s got that head-dress on. It’s a Hull shirt, but I had to take the badge off in case any fucking twat kicked off about it.”

Litten writes with genuine affection and compassion for his motley collection of perennial underachievers. His hangdog sense of humour percolates through the gleeful armchair malice of Go to a Grown-Up and feckless pathos of Christmas Is Magic, in which a jobless stoner hatches an ill-advised plan to finance his family’s festive season on the back of a drug deal.

“I think it goes back to the Raymond Carver thing,” suggests Litten. “When I first read him I thought, fucking hell you can write stories about ordinary people; you can elevate their seemingly mundane lives into something heroic. I think him, more than anyone, made me think I wanted to be a writer – or that I could even be a writer.”

This desire to transpose Carver’s finely drawn narratives to East Yorkshire may well inform the stories in We Know What We Are, but where he is invariably cool and detached, Litten cannot help but be warm and visceral, attuned as he is to his characters’ brittle circumstances in the manner of Barry Hines.

“(Hines) wrote about working class people in a way that wasn’t diminishing or patronising,” agrees Litten, “but was done out of real fucking love and insight and respect.”

We Know What We Are lays bare the rawness of lives spent in society’s penumbra and Litten somehow infuses the relentless daily grind with purpose and dignity. He offers hope where lesser writers would have chosen despair.

We Know What We Are by Russ Litten is out now, published by Obliterati Press. Russ is working on a new novel, possibly set in a prison.