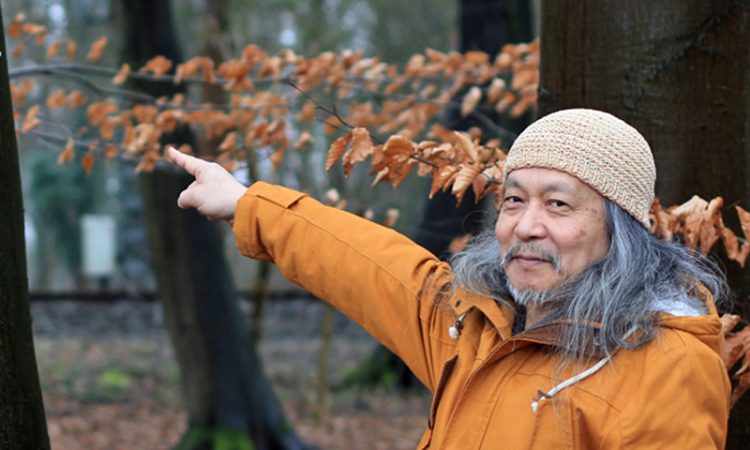 I Am Damo Suzuki (All photos courtesy of Michelle Heighway)

‘In Damo Suzuki, Can found their bubblegum hero,’ writes Julian Cope in Krautrock Sampler, confessing to a huge crush on the fabled frontman.

Cope is not alone – the late Mark E Smith immortalised him in I Am Damo Suzuki and John Lydon championed the singer’s performance on the eighteen-plus minutes Halleluhwah when he appeared on Tommy Vance’s Capital Radio show at the height of punk in 1977.

For three years, director Michelle Heighway has been working closely with Suzuki and his partner Elke Morsbach on Energy – A Documentary about Damo Suzuki. “(It) is a wonderful story of hope,” says the film-maker, whose debut Mr Somebody took a long look at notorious Huddersfield eccentric Jake Mangel-Wurzel. “It is a personal portrait of a nomad, poet and enigmatic singer on an incredible journey…”

Diagnosed with colon cancer in 2014, Suzuki has been forced to curtail his series of spontaneous live concerts. Improvised entirely on the spot and enlisting local backing bands in cities across the UK, Europe and America, these characteristically fearless performances highlighted the singer’s incredible virtuosity and staked his entry in rock’s back pages.

Energy follows the singer as he confronts his cancer, somehow managing to keep smiling even when relying on a drip and Hickman line fed directly into his heart. Heighway explores the artist’s singular outlook on creativity and his personal art of protest.

Set for release later next year, Energy is now crowdfunding to raise the £20 thousand needed to complete the film. If you love Suzuki, you can help make it a reality and contribute. Perks include a limited edition T –shirts and original artwork. Even if you don’t even know who he is, you should still contribute…

Energy : A Documentary About Damo Suzuki | More information, including details of how to contribute can be found here.