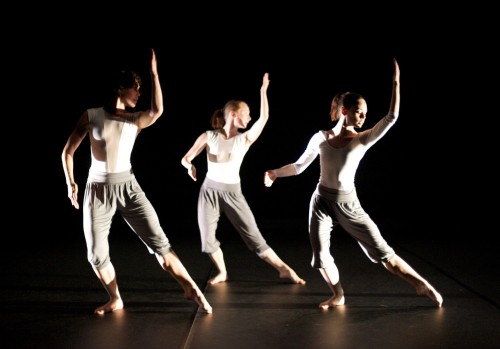 “I’m just too stressed to parallel park!” I’m aware of just how ridiculous the words sound as they pass my lips, but I’ve had a long day. It’s raining, there’s nowhere to park, and I’m running late for something I’m now regretting agreeing to in the first place.

I wrench the wheel and briefly consider just calling the whole thing off. But I’ve promised my friend a night out, it’s too late to cancel, and I’ve promised Culture Vultures and this dance company – what were they called again? – a review. Suddenly there’s a space and we’re pacing our way through Leeds Uni trying to remember where the bejesus stage@leeds is with about thirty seconds to go til showtime.

Fast forward, tickets picked up, seats found with a pleasantly surprising lack of hurriedness despite our late arrival, and as the lights start to dim I begin to relax into the task at hand. As the first dancer pads onto the stage, lithe and graceful, relaxation ebbs away again. What am I doing? I am a dance dunce. The only two words I can use to describe dancers are “lithe” and “graceful”.

It’s too late now, though. I’m here, there’s people dancing about in front of me and I have no idea how I’m going to even attempt to do them any justice. Because the thing is – one thing even this dance dunce can tell – is they’re really not bad at rhythmically moving their bodies into various shapes while some music plays. See, that was a brilliant flail. Brilliant. And that one’s doing that really rather pointy thing with her elbow. Pretty sure my elbow would never point like that. That one’s a bit snakey, and that one’s a bit elf-y, and the amazing thing is that they haven’t even unintentionally bumped into each other once.

Right. No. Focus. I’m not a bad writer. It’s just about explaining what I can see and hear and how it makes me feel, right? Let’s focus. OK. So the Balbir Singh Dance Company – yes, that’s what they’re called, that’s better – are moving around in front of me. Lithely, and gracefully. There’s an interesting soundtrack that’s going from Indian raga type sounds to jazzy saxophone to muffled breakbeat, and they’re keeping pace and moving about. And they’re freezing in position now, and, oh. Everyone’s clapping. Right. That’s a third of the triple bill done and I still have no idea what I’m going to say apart from “It was good. I liked it.”

OK. Next up. Now, this is promising. There’s a guy tuning a tabla on one side of the stage, and a girl with a microphone on the other. I’ve studied music, I know what to say about music. Tabla tuned, deep breath taken, and… oh. She’s beatboxing. He’s tabla-ing and she’s beatboxing. And there’s a couple of guys moving around. One’s more lithe than the other, and I’m pretty sure that’s on purpose. Yes, there’s an East meets West theme going on here, I think. The tabla and the jerky guy who keeps slapping his feet on the floor representing East, the beat-boxer and the lithe guy who’s clicking his fingers and making some rave shapes with his hands representing West. They’re doing some call and response type things, and copying each other. I’m sitting a bit lower in my seat, and really rather enjoying myself now. If only I knew what the hell to write to explain that.

We’re all clapping and cheering and there’s a break now. The stresses of the day are forgotten whilst I while away the interval trying to think of synonyms for “lithe” and “graceful”.

Lights down again, and there’s lots of them on stage now. Six of them. Some on the floor, some pacing around, sometimes all of them on the floor and sometimes all of them pacing around. It’s beautiful, but the lighting’s making me feel a bit claustrophobic as it closes in on them. I’m not sure if I’m reacting how I’m supposed to. But suddenly this is more than a spectacle and I’m actually feeling something. There’s a story behind all this, and the dancers are moving their bodies and I’m getting some meaning from it. I’ve got no idea how much time has passed, and I’ve stopped running through synonyms in my head for the first time since I sat down.

The music builds and so do the movements, and I’m genuinely exhilarated. The crescendo reaches its peak, and the six figures in white slow and walk to the back of the stage, and the music slows and crackles, and then it’s over. This time I’m not even thinking during the applause. I’m pretty sure a “whoop” passes my lips, and I don’t feel daft for letting it escape.

On the way back to the car, while I’m gleefully not considering the stresses of the day, my friend turns to me: “So, what did you think?”. I ponder for a second, and answer:

“I bloody loved it. But I’ve got no idea what the hell I’m going to write.”

Balbir Singh Dance Company performed their triple bill of Play of Percentages, Decreasing Infinity, and Trespass at Leeds University’s stage@leeds on Thurs 6th February, and are touring nationally in Spring 2014. You should go and see it, even though this dance dunce can’t explain why…