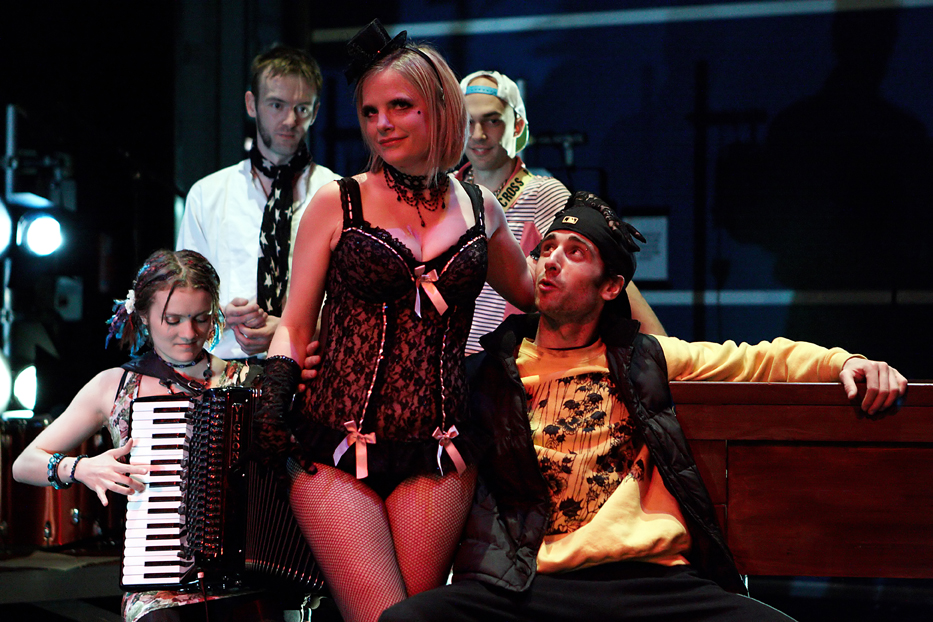 Let’s be honest, in the past we have all probably, spent too much time and money in public houses, there may even have been times when our stays strayed outside of the licencing hours. Well what harm did it do? Everyone was enjoying themselves, and the landlady simply forgot to call time. Several hours later we’d emerge on mass to welcome the dawn and have celebrated the memories ever since. Oh! What it is to be able to claim to have misspent a youth without doing yourself or others any harm.

When I was told that York Theatre Royal where hosting a performance of a play called The Lock In my mind returned to memories of being locked in, in my youth. They did not tell me that this is a play about a lock in that has been remixed.

The public house in this lock in is Ye Olde Fighting Cocks. It has been deserted for years. Neglected and unused you can forget anything which might bring images of a local neighbourhood boozer to mind at this point. This is after all no ordinary public house, well it’s nothing like the public houses round my way, much depleted in numbers from the heyday of my youth. No this is a pub that hosts five-star live music and dance extravaganzas that include both the oldest forms of dance and bang up to date break dancing with everything in-between.

Although to the untrained eye Ye Olde Fighting Cocks is an abandoned pub, to those in the know it is a location frequented by other worldly characters who go there to dance.

One of the highpoints of many musicals that have an adversarial plot like West Side Story, is the clash between the two sides in a full on dance to the finish last dancer still moving wins show down. It is a plot device which Michael Jackson used to great effect in some of his music videos, especially ‘Bad!’

Now just imagine a whole show based around a clash of dance styles.

One night these regulars are joined by a group of hip hop dancers. It’s not going to be long before the clash of dancing styles and the cultures which they embody clash and turn into a dance floor stand-off. The result is an awe-inspiring dance spectacular with live music including English Folk, Hip Hop, House, Funk, Disco, Ska, and Drum & Bass, from the Demon Barbers.

I am expecting that The Lock In Remixed will be a high energy cornucopia of music and dance, that will have me leaping out of my seat, having as much fun as those who are lucky enough to be on stage. Best not make any plans for the morning of 17th September,  I’ll need a lie-in after this lock in!

You can see The Lock In ‘Remixed’ featuring the Demon Barbers at York Theatre Royal on Saturday 16 September, at 7.30pm Tickets £18, concessions available.