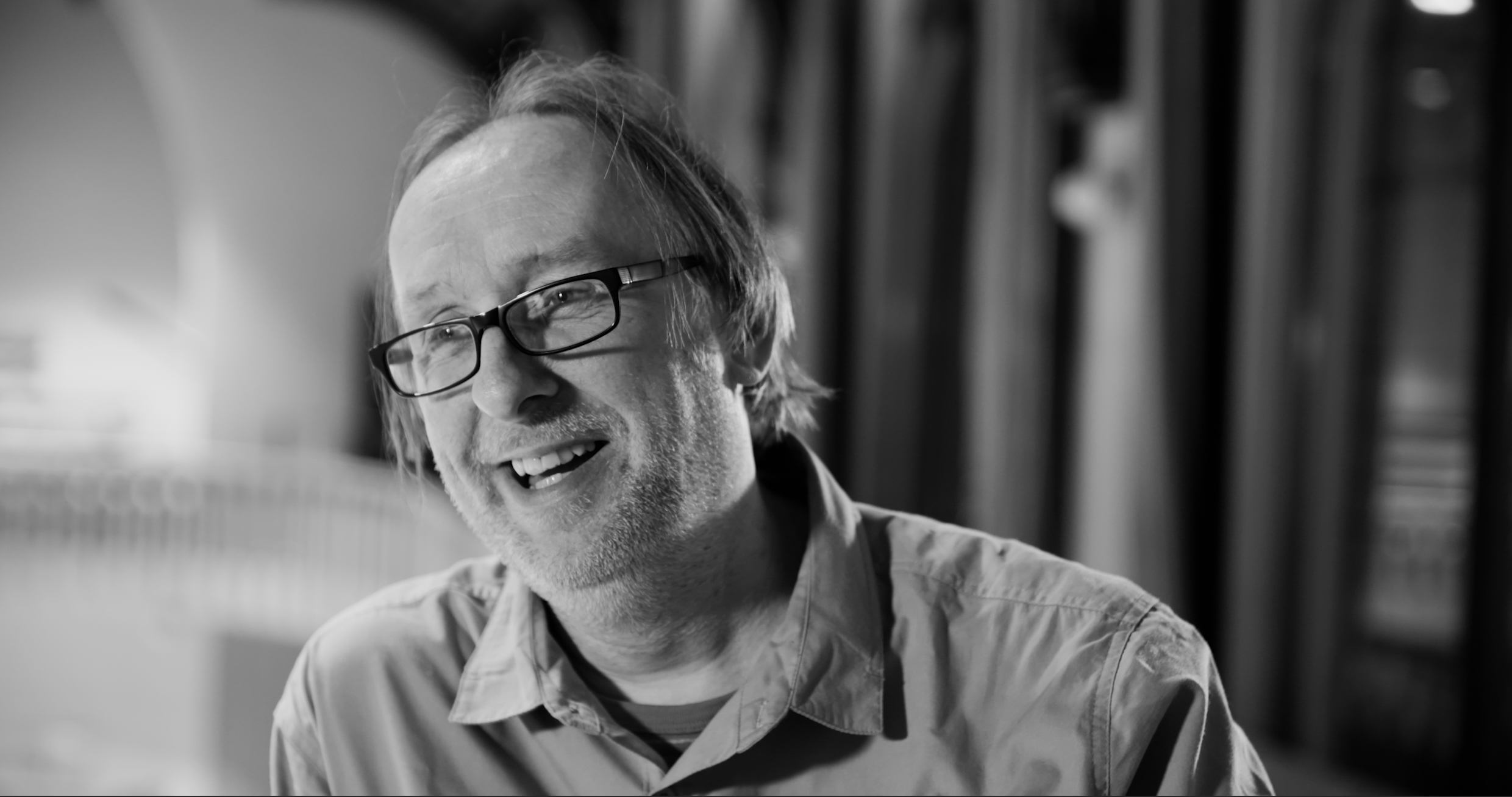 With two major works opening in the next month, acclaimed sound artist Jez riley French tells Neil Mudd how it all began with John Peel and a mishap with a tape recorder.

‘Noises must become music,’ wrote filmmaker Robert Bresson with characteristic exactness. He might just as readily have been describing the work of artist Jez riley French – a pioneer in field recording and creative sound.

Presented with a tape recorder at a young age by his mother, French accidentally recorded over a John Peel session he had taped from the night before. ‘It was about ten minutes before I realised I’d been recording the sound of the garden,’ the artist explains, speaking via Skype from his home studio in East Yorkshire, ‘but the crucial thing is that I listened back and didn’t just think, ‘Oh that’s a mistake. I’ll just record some music on it.’ This being 1978, with the lingering fallout from punk’s Year Zero empowering Britain’s youth in unexpected ways, French listened to the sounds of the garden, the subliminal rumble of the world about him, the hiss of the magnetic tape spooling in the machine: ‘I perceived it as music. I didn’t perceive it as something else. I immediately got excited by the fact that I had created something.’

French has spent his life listening to noise in all its myriad forms, either with his ears or through the high-specification microphones he designs himself. Alongside Chris Watson, he is a key figure in British field recording. He lectures and runs workshops about it around the world. He has curated numerous performances, installations and exhibitions, with signature works at the Tate Modern in London and Museum of Contemporary Art in Tokyo. He runs the label engraved glass, a music imprint through which he releases limited editions of his own composition work and those of like-minded spirits; he publishes an e-zine verdure engraved to showcase other artists’ work; and he creates photographic scores for an occasional series of collaborations with his daughter, the artist, Phoebe riley Law.

But it is as a field recordist – particularly of the resonance of surfaces and structures which characterises his recent aural explorations – that has made French the go-to guy if you want to know what a glacier being heated by the sea sounds like. ‘I record moments – that’s what I always say. It’s very rare that I press record. It’s like a compositional thing. It’s almost like choosing the right note in a composition. I just feel that that’s the right time to press record.’

Recording has now become a democracy – anyone with a Smartphone can capture a piece of audio. However, in the same way that owning a camera does not make someone a photographer, nascent field recordists must develop their ear for it, says French. The key is learning how to listen: as an eleven year old chorister, every practice began with twenty minutes spent tuning into the space inside his local church. ‘At the time it drove us mad, but I think that had an impact,’ French remembers today. ‘I think I came to appreciate situational sound as a thing – it wasn’t just something that was there in the background. I paid attention to it.’

‘The house where I grew up with my mum, I remember that house as a very tranquil place where it wasn’t just an absence of sound, but it was about paying attention to the lack of noise, for want of a better phrase. And for me, those early experiences got me fascinated with the material quality of sound.’ This is what separates what he does from being a purely mechanistic cataloguing exercise. ‘Of course, there is a science to sound, but in terms of the creativity, there’s the emotion – the human failing – where the mistakes are as important as the things that go right.’

French is self-taught, with the autodidact’s polymath fervour which that implies. A school leaver at sixteen, he bypassed the traditional career trajectories of art school and university. Too young to be conscious of the activities of local firebrands COUM Transmissions, whose members included Genesis P-orridge and Cosey Fanni Tutti, by the time he was old enough, they had already decamped for London and reinvented themselves as Throbbing Gristle. ‘By then I was following my own slightly erratic path through my own personal musical education,’ says French. ‘Purely for me, that was essential, I had no idea that field recording was something – I just wandered round with my tape recorder collecting sounds. I think if I’d been aware of other people doing it then I probably would have been put off slightly, intimidated by the history or something like that.’

For the past few months, French has been assiduously capturing the ‘music’ of the Humber Bridge for Height of the Reeds, an ambitious major new installation by Opera North for Hull UK City of Culture 2017, which runs throughout April at the iconic East Yorkshire landmark. Despite his international profile French is a confessed ‘home bird,’ remaining loyal to his East Coast roots. He lives close by the Humber Bridge, making him a natural fit for the project. ‘If I’m known for anything, I do work a lot with buildings and structures vibrating and resonating,’ he says. ‘There are not that many people in the phonebook who do that sort of thing,’ he adds with a touch of self-deprecation.

Height of the Reeds includes a musical score composed and performed by jazz trumpet player Arve Henriksen, electronic musician Jan Bang and guitarist Eivind Aarset, with the Chorus and Orchestra of Opera North. Billed as ‘an adventure in sound’, the audio piece layers together the musicians’ playing with choral and orchestral elements, poetry and spoken word, personal testimonies and archival samples: French’s field recordings add contextual auditory brushstrokes. Height of the Reeds is specifically sound-engineered to be heard through headphones during a walk across the Humber Bridge, the longest single-span suspension bridge in the world traversable on foot.

‘There are certain aspects to it that are still being ironed out, but the basic thing is that it’s a headphone piece – you walk along the bridge with headphones on and there are sensors along the way which trigger certain sounds, certain sections of the work,’ says French. ‘Depending on how fast you walk, and how long you want to stay stood watching a certain spot, then the piece will change.’ On the return journey across the bridge, visitors will experience a continuous composition of the field recordings French produced for the project, including some of the hidden sounds of the bridge and its surrounding habitat. ‘There’s a recording of some water beetles from one of the ponds from the reed beds,’ says French, ‘and the sound of the curved railings resonating and being played.’

This is the first time the musicians and French have collaborated together, though they have been aware of one another’s work for many years. ‘It’s been very open. They didn’t dictate,’ French says. ‘They knew I kind of know what I’m doing when it comes to field recording and structures, so they just let me get on with it. I delivered to them recordings that I thought were the most interesting from the bridge and its locale. It’s been an organic kind of process really. It’s developed quite naturally. Everyone has a really strong respect for each other’s practice, so it’s been really positive.’

French likes to work intuitively and spontaneously, preferring to use a relatively small and portable set up. For the Humber Bridge commission he mainly recorded using his own contact microphones, some geophones for low frequency infrasonic noise, a more conventional Sanken stereo microphone and small DPA omni microphones which he describes as among his favourites. ’I was interested in doing some ambisonic (full sphere) recording on the bridge and surroundings, but because of the nature of the piece being a headphone piece, there wasn’t much point in doing that.’ A hydrophone (for capturing soundwaves underwater) yielded some startling results: ‘There’s a recording of a piece of the Humber Bridge dissolving,’ he laughs. ‘I didn’t remove it, so there was a big gap in the bridge. It was a piece that had fallen off some years ago and was in one of the yards.’

The mention of hydrophones leads to a brief discourse on fellow East Yorkshireman, the composer Gavin Bryars, whose piece The Sinking of the Titanic makes much of Marconi’s conviction that sound never truly dies, just grows fainter and fainter. Given water’s properties as an excellent conductor of sound, suggests Bryars, and with sensitive enough recording equipment available, it would be theoretically possible to record the sound of the great liner in its death throes – sound as a form of time travel.

‘Sound for me is more a magnifying glass – you can go as deep into sound as you want – listen to the tiniest molecules if you have the splitting micro tools to do it,’ says French. ‘As to the time travel aspect – this idea that sound remains somehow in a historical context, I’m not convinced by that. It would be great if you could plug in the ocean so you can hear it, but you have to be careful with those kinds of ideas really.’

‘What’s fascinating – and connected to that in terms of sounds in the oceans – is that whales, for example, use specific columns of water in which to project their song. The water is less dense, and therefore the song of certain whales can carry for 400 kilometres before it starts deteriorating. That’s the real mind blowing kind of stuff I think.’

For someone who describes himself in interviews as a private person who happens to do a lot of very public things, the next few months look set to raise French’s visibility around his native Hull. As Height of the Reeds approaches its conclusion towards the end of April, French will unveil a newly created installation as part of the John Grant curated North Atlantic Flux festival. Utilising sounds he recorded in Iceland on a recent working visit, French advises visitors to his website to ‘expect to hear the sound of the world turning.’

Height of the Reeds – A Sound Journey for the Humber Bridge by Opera North runs 1 – 30 April 2017 as part of Hull UK City of Culture 2017. At time of writing, all tickets for this event have sold out.

Neil Mudd is a writer and reviewer. He lives in Leeds. He wishes he lived in 1965.