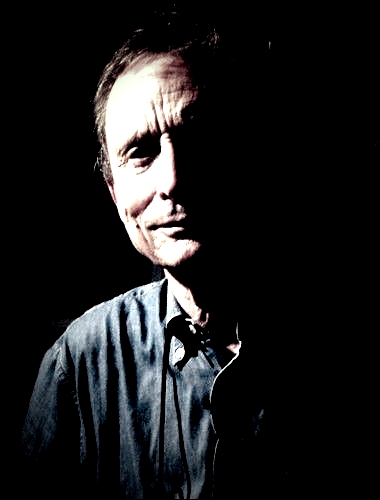 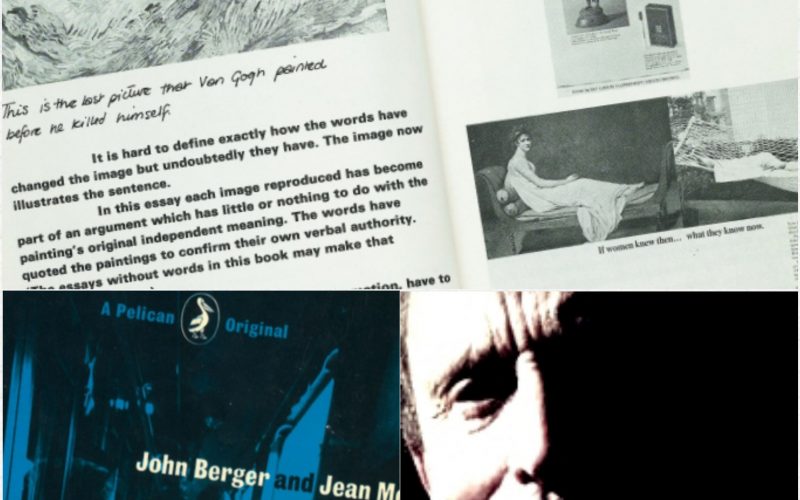 Designer and author, CHRISTOPHER WILSON has spent the past five years writing a book about the media-shy graphic designer Richard Hollis and his pioneering work for London’s Whitechapel Art Gallery. He tells NEIL MUDD why it was a story that needed to be written…

Born in 1934, Richard Hollis is perhaps the graphic designer’s graphic designer, able to stake a claim to the idea before it even properly existed. You may be familiar with some of his distinctive covers for Penguin Books or know him for his groundbreaking work on John Berger’s Ways of Seeing? Perhaps you have read Hollis’s book Graphic Design : A Concise History, a definitive work on the subject in which (tellingly) the designer’s own name is conspicuously missing?

Such self-effacement is entirely in character, says Christopher Wilson, the author of Richard Hollis Designs For The Whitechapel (Hyphen Press), an account of Hollis’s pioneering output for the East London gallery.

In 2012, when London’s Libby Sellers Gallery exhibited some of the designer’s work, Wilson recalls Hollis holding his head in his hands in despair: “Most designers would have been delighted, but Richard hates any type of spotlight,” he says. “I think he feels that it’s an antithesis of what he’s tried to do. On some of the designs he’s done over the years he omitted his name, because he felt that a designer should remain behind the scenes.”

“One time he even said to me, ‘If I’m forgotten then that’s good.’ I don’t think that’s just him, it’s other people of his generation as well. The concept of the graphic designer-as-personality is alien to them.”

Painstakingly measured in tone and lavishly illustrated with over 800 colour images, the book has been a labour of love for Wilson who, as Oberphones, is also a graphic designer. He is well-placed to have written it. For five years, between 1999 and 2004, he worked as Hollis’s assistant on many jobs, immersed in every aspect of the designer’s practice, and they have remained close friends since.

Hollis still works from home, either alone or with one assistant at a time. His clients are often drawn from a pool of leftist, socially conscious organisations – arts and cultural groups, trade unions, charities. For Wilson, this became a model of how to maintain a visionary, uncompromising freelance design practice.

“I’d just finished working somewhere where there was a very monastic, chi-chi design atmosphere. Nobody really spoke to anybody else about what they were doing, they just put their heads down and got on with their work. There was, ironically, very little communication.”

Working with Hollis, Wilson was called upon to discuss everything. The two designers proved simpatico, their work on any project together often extending far beyond the brief set by the client. “If we didn’t like the way the text was, we would just rewrite it, without asking for permission. If something seemed to be badly written or badly edited, we would rework it between the two of us.”

“We would discuss every line ending [writer Rick Poynor has suggested that Hollis’s placing of text is akin to blank verse], every aspect of the typography and everything else,” says Wilson. “We would discuss what the particular mood of the project was, and whether the design was communicating what the client wanted to say, and in a voice that was appropriate. Our pace was probably slower than you’d find in many studios, but it was constant.”

Hollis tends to work on one-off projects for smaller clients, thus avoiding the multinationals with their corporate identity manuals. “Even then, we did one catalogue for the Serpentine Gallery, and neither Richard nor myself liked the typeface that they used, so we surreptitiously substituted a similar but more legible one. They didn’t notice.”

Unusually for an artist monograph, Wilson’s book is less about the personality of its subject and more about the work he produced for a specific client. The designer was initially employed by The Whitechapel between 1969 and 1973. He returned in 1978, finally departing after the gallery’s refurbishment in 1985.

“One of my reasons for choosing to focus on Richard’s Whitechapel work, as opposed to any other client, is that it shows him working in a lot of different ways,” explains Wilson. “The audience for the gallery while under Mark Glazebrook, or previously Bryan Robertson, is not the same audience it has under Jenny Stein, or Jasia Reichardt or later Nick Serota. And the work covers lots of formats: posters, books, invitations, newsletters.”

In Wilson’s narrative, the gallery itself is a key protagonist. Established in the late nineteenth century to better the cultural lives of the East End’s working class, the gallery building opened in 1901. Incredibly, given it is such an important artistic institution, Wilson’s book is the first official account of its history.

“By the time Richard becomes its designer, it had been open for sixty-eight years. It becomes quite an unusual brief for Richard in that sense, because he’s dealing with a client that has a long history, but no fixed visual identity.”

Equating the Whitechapel Gallery of today with its cash-strapped former self is a stretch. When Hollis started work for the gallery in 1969, the management had been limping from one financial crisis to another. Staffing was minimal and haphazard. Deputy director, Helene Winer, remembers interns who were almost certainly members of the IRA on the run being paid cash in hand.

“Richard does put in place at the Whitechapel what would now be seen as an “identity”, although it wouldn’t have been called that at the time. He introduces the typeface Berthold Block; there are certain approaches to using folds in the sheets, and certainly Richard’s obsession with economy fitted the gallery very well because they were so broke.”

The Whitechapel Gallery acts as a prism through which to examine Hollis’s career. The two periods of Hollis’s tenure were markedly different: “It becomes a case of compare and contrast between what was going on in the first period and what happens in the second.” Wilson adopted what he describes as a fractal approach: “A lot of things changed during the time (Hollis) was working for them – even the production methods of graphic design. A central idea of the book is that you can understand Richard’s approach in its entirety by examining how he worked with this one client.”

“The client is still the same gallery. It’s still in the same location and the location is very important to what the gallery is. It was originally set up as a kind of tonic to the very poor of the East End, so it still has that mission, but obviously under different directors that mission comes sometimes to the fore and at other times is almost thrown out of the window.”

Wilson describes conditions under Mark Glazebrook, who originally hired Hollis when he was a surprise appointment as director in 1969, as slightly chaotic. Frustrated by the lack of funding, Glazebrook baled in 1971 and was followed by Jenny Stein, whose position as director was never officially ratified. “Jenny has very much a socialist ethos, and that fuelled a lot of the exhibitions that she staged. The design becomes a bit of a free-for-all. She starts employing lots of different people as designers. Richard became just another of them.”

Hollis left the Whitechapel within a year, but returned in 1978. By then, the director of the gallery was Nicholas Serota. “Serota came with a certain kind of vision for the place … The look of the work tightens up a lot. It becomes a little more uniform, more recognisable as the Whitechapel, but is still flexible. It becomes more coherent without becoming flat or deadened.”

The book ends in 1985. “There’s a sense of a certain type of design stopping at that point,” says Wilson. “Nick Serota handed the design of the Whitechapel over to Peter Saville Associates and they had a completely different approach and ethos. It’s much less hands-on, much more style-based, more to do with cultural positioning – all things that Richard would never have considered or had any interest in.”

“Richard is very self-critical. If you want to say that a piece of his work is dreadful because of A, B and C, he will not stop you. Many designers are too vain to allow that. But Richard is committed to the idea that work should be useful. If it’s useful to say that a design didn’t work, and to explain why, then so be it. He isn’t trying to protect any cult of himself, and this is something where the dual focus of the book has helped. It is equally about him and the Whitechapel, so it takes the spotlight off him in places and puts him in a context at all times.”

Though the book has been written in close consultation with Hollis, it is not an authorised biography. Nonetheless, Wilson says he feels a certain resentment that Hollis’s methods, and his way of thinking about design, have not been better disseminated or are more widely known.

“I wasn’t under any pressure to say he was wonderful or anything like that,” says the author, “but ultimately I do think he’s much more important than he realises.” 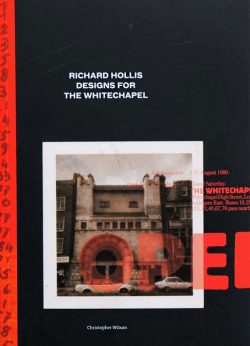 Richard Hollis Designs for the Whitechapel Gallery by Christopher Wilson is published by Hyphen Press, priced £30. Further details, including how to buy here.