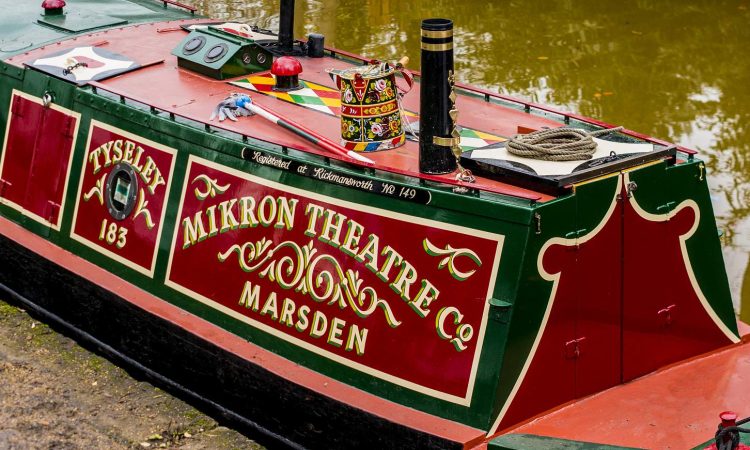 Fifty years on, MIKRON THEATRE is a much-loved West Yorkshire institution – and as RICHARD HORSMAN discovered, there’s a real family ethos behind the Marsden-based theatre company.

Producer Pete Toon is quite clear. When they’re auditioning a new actor to join Mikron, he knows within minutes if they’re going to fit in. “Often they have no idea who I am” he says. “And how an actor behaves towards the guy who opens the door is a good indicator of what they’ll be like in the company”.

Pete, and Mikron’s Artistic Director Marianne McNamara, have an association with Mikron going back twenty years. Now real-life partners, they both joined themselves as actors, and two decades on they’re still very much part of the Mikron family. That loyalty to the cause is not unusual.

There’s something about the setup – a theatre company that tours each summer the length and breadth of the country with two shows, a different venue every night – that inspires a bond both in the creative team and in the audiences who come back year after year to enjoy the performances.

That audience is growing – there’s even a waiting list of venues hoping they can be included if not this year, then in a Mikron tour in 2023 or beyond.

Covid delivered a curve ball for the whole arts sector and for a while there were fears the company couldn’t go on – but somehow they held it together with determination, and offers of help in cash and in kind which flooded in from the community of supporters built up over half a century.

There aren’t many theatre companies where everyone mucks in to quite the extent they do in Mikron.

This year’s actors are no exception – they’ll be cooking breakfast, building the set, selling programmes or merchandise in the interval, and for the time each year the company spend aboard the narrow boat Tyseley touring pubs and canal side venues they’re literally living and working together 24 hours a day.

So it’s important they get along. No room for divas. Standing ovations and washing up come as part of the same package.

For 2022 they’re touring two shows – Raising Agents by Maeve Larkin is an affectionate look at the institution that is the Womens’ Institute and was first staged by Mikron in 2015.

Red Sky at Night is a new play by Lindsay Rodden taking an affectionate look at the British relationship with the weather – something that this year’s cast of Hannah Bainbridge, Thomas Cotran, Alice McKenna, and James McLean will be experiencing at first hand as they tour outdoor as well as indoor venues between now and October.

Richard Horsman caught up with Artistic Director Marianne McNamara and Producer Pete Toon as they were setting up in Bingley earlier in the run .. and he asked Marianne what Mikron is all about:

Mikron Theatre is touring in West Yorkshire and beyond until the 22nd of October – for a full listing of venues for both shows, RAISING AGENTS and RED SKY AT NIGHT visit the Mikron Theatre website