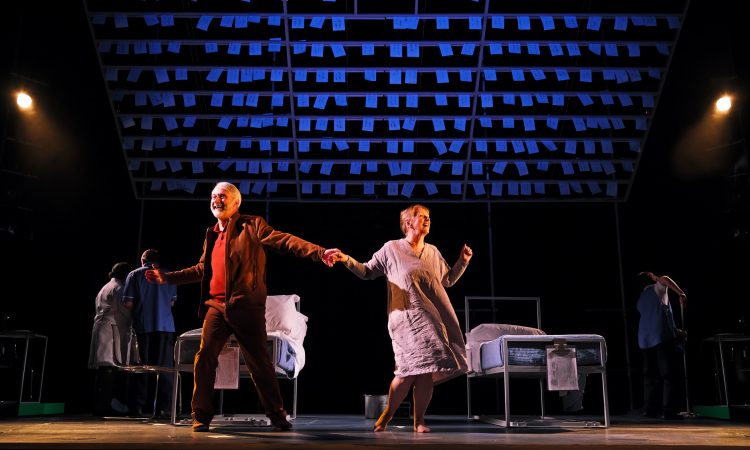 It’s billed as a play about dementia, but really it’s a play about love. RICHARD HORSMAN tells us MAGGIE MAY at LEEDS PLAYHOUSE is an emotional rollercoaster – in a good way.

Writer Frances Poet admits she felt intimidated when she was first asked to create a story about dementia, but with a positive take on life after diagnosis. Her family experience was anything but positive; her own father was living with the condition, and it was tough.

The play which emerged doesn’t minimise or sugar coat the hurt. There are real painful, poignant moments when you can hear a pin drop in the Courtyard theatre as Eithne Browne in the title role of Maggie struggles through social interactions, forgetting names and events causing real anguish for herself and those she loves most.

But these moments are perfectly judged, and under Jemima Levick’s direction they’re balanced with humour and, more importantly, demonstrations of love. Real love, because when words don’t come easy – it’s a Leeds family after all, not comfortable with flowery speeches – it’s actions which speak loudest.

That love is most obvious from husband Gordon (Tony Timberlake), Maggie’s partner of fifty years who is himself recovering from a stroke. The couple share a love of early 70s music from their days dancing together, and when words or spirits fail the lyrics of a song from that period are still clear and bright in her mind. But it’s not easy for him.

Their son Michael (Mark Holgate) is finding love difficult. He’s already running the family business single handed since dad’s stroke, and now Maggie’s made a mess of his accounts. He copes with pain by walking out. Hurting from a breakup with one girlfriend he’s about to lose another, who might just be the one. If only he could find the words.

Jo (Maxine Finch) loves Maggie the way only a best friend can. Direct, practical, straight talking .. there’s an honesty between them. but sometimes honesty can wound. Almost as much as hiding things and keeping secrets. But a bestie will keep coming back.

Claire (Shireen Farkhoy) is the catalyst that changes things for the better – eventually. Meeting the boyfriend’s parents for the first time is never easy. Her love of Harry Potter, and her style choices, prove pivotal to the way Maggie’s story plays out.

In a tale about memory loss, memories are important. Looming over the action in Francis O’Connor’s set are dozens of Post-It notes .. a daily necessity to avoid forgetting what must be done. Each scene begins with Maggie vocalising where she is and who she’s with – thoughts which are captured on two large screens.

Maggie May is a powerful and poignant production, an intimate examination of the impact of dementia on a family told with honesty and humour .. and there’s hope, in Maggie’s coming to terms with the condition and reaching out for help from those closest to her – and from those who know what its like.

Maggie May was originally commissioned in 2017 as part of Leeds Playhouse’s award-winning Every Third Minute Festival, a seven-week programme of activities and events curated by people living with dementia and their supporters, and it’s a co-production with Curve and the Queen’s Theatre Hornchurch. It was due to open in March 2020, but closed after three previews because of the pandemic.

All performances of Maggie May during the run will be dementia-friendly, with additional staff, detailed pre-show information and a quiet space available if needed.