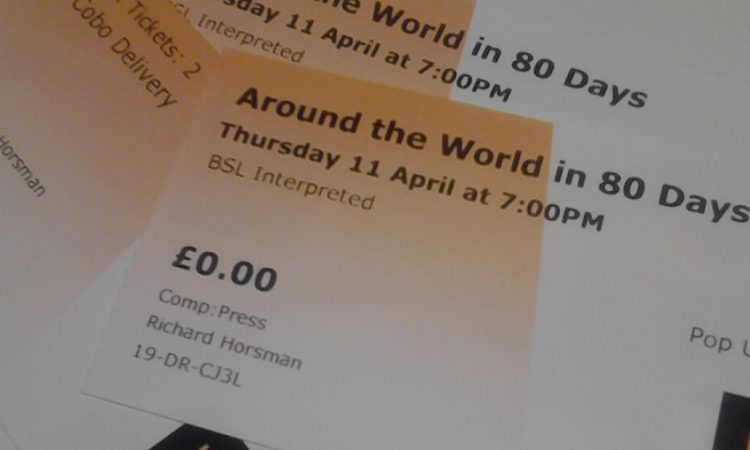 The main thing you need to know about this show at LEEDS PLAYHOUSE is that it’s a physical farce; and it all gets a bit meta, what with it being a play about a play, and then Jules Verne dropping in. RICHARD HORSMAN found himself getting involved …

Around the World in 80 Days is exactly the show the Playhouse needs at this stage of the season, following the theatrical intensity of the gender-swapping Hamlet just gone, and the emotional rollercoaster of Be My Baby coming next month.

It’s a farce, and compared to the season so far it showcases very different comedic talents in the four male performers of the Playhouse Ensemble. The women of the company sit this one out, whilst the lads get very physical. Director Alexander Ferris says they’ve drawn inspiration from Morecambe and Wise, Buster Keaton, and Indiana Jones, and I for one would be amazed if the cast don’t lose half a stone each over the course of the evening.

Don’t expect a chocolate box telling of the story, although I do have serious waistcoat envy from Amanda Stoodley’s sumptuous steampunk costumes.

All the elements are there; Phileas Fogg (Robert Pickavance) makes a wager he can race around the Victorian world in just 80 days with the help of his manservant, Passepartout (Joe Alessi). Fix of the Yard (Darren Kuppan) is a detective on the trail of a bank robber, and Fogg fits the wanted man’s description.

Then it all gets a bit meta. We’re not watching the play, we’re watching a play about the play we’re watching. Think Waiting for Godot, and then God turns up.

Or at least, the Creator arrives. In this case, Jules Verne (Dan Parr) who, in this adaptation of the story by Toby Hulse, muscles in on the action when the cast don’t stick closely enough to his text. For reasons I won’t go into here, Verne also spends most of the evening in drag.

Talking to my fellow critics in the interval (we can all do this meta stuff when required) everyone agreed the cast delivered a technically superb piece. Kuppan in particular is a gifted physical performer, throwing himself around the space with assured gusto, and drawing a laugh from something as simple as a bow. Not to be outdone, Alessi relishes the quick change challenge of playing two parts that require him to swap outfits repeatedly in the time it takes to cross behind a screen. The dresser came on for a bow at the end.

But was it funny? We reviewers have a camaraderie of sorts, as we spend so many evenings together, sharing general thoughts whilst keeping our best lines back to lob at each other online, but it’s fair to say on this one opinion was divided. It’s a bit like the silent films that in part inspired the treatment; some viewers find them hysterically amusing, whilst others watch the pratfalls stony faced.

For me, Around the World in 80 Days is a perfect escape from Brexit Britain, with an endearing absurdity and a relentless energy, and with added edginess as we’re never sure where the meta references will take us next. The cast are clearly enjoying every minute of it, and that for me as a viewer is infectious.

Ground-breaking smart caption glasses developed by the National Theatre and Leeds Beckett University Professor Andrew Lambourne will be trialled on performances of this show between 16 – 28 April. The glasses respond to the voices of the performers, and display the text as it is spoken or sung on stage including descriptions of music and sound effects. If you want to be part of the trial, contact Leeds Playhouse on 0113 213 7700 or visit the box office at 19 Eastgate.