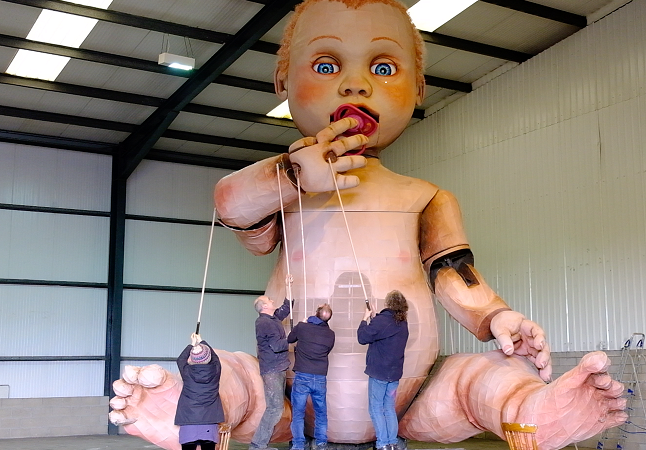 Think the illuminations of LIGHT NIGHT and the giant puppets of CARNIVAL, combined with a giant baby, 3D projection, a cast of more than a hundred and an original music score. MIND THE GAP’s ZARA comes to the PIECE HALL in HALIFAX at Easter. RICHARD HORSMAN can’t wait to see it.

It’ll take nine puppeteers to make baby Eva move round the venue. That’s thinking big. Zara is the biggest production Bradford-based Mind the Gap theatre have staged in their thirty year history, and after this one, senior producer Lisa Mallaghan reckons we’ll never think about learning disabilities in quite the same way.

Zara is the third and most ambitious production created as part of Mind the Gap’s Daughters of Fortune project, which looks at the often taboo issue of people with a learning disability who want to have a family of their own.

The unspoken assumption, even from health professionals, is all too frequently that a parent with such disabilities can’t cope, and shouldn’t be placed in the position of caring for a child. The issues and stereotypes involved were first aired with Anna, a small scale theatre piece used in research workshops.

That was followed up by Mia, a studio production that took the 2017 Edinburgh Fringe Festival by storm, and which has now toured to 24 theatres across the UK.

I saw the premiere of Mia for The Culture Vulture at Mind the Gap’s base in Bradford’s historic Lister Mills. I went in expecting polemic. I didn’t expect it to be funny, poignant, touching and one of the most memorable shows I reviewed that year. Now Zara brings this award-winning project to a climax with a large-scale outdoor audience spectacle.

There’s no doubt it’s the giant baby who demands – and attracts – all the attention. Eva was designed by Francis Morgan, who’s no stranger to walking with giants:

Eva met her “mum” for the first time last week. Mind the Gap’s JoAnne Haines, who plays Zara, was one of the cast in Mia who stepped out of character to speak directly and passionately to the audience about her own experiences of relationships, and of one day maybe wanting a family.

It’s been a labour of love to bring the big show to fruition for senior producer Lisa Mallaghan.

It’s also been non stop for the team at Mind the Gap HQ. Speaking to me over a coffee during a rare break in the constant round of phone calls and meetings ahead of the first show at Halifax Piece Hall on Good Friday, Lisa told me what to expect during the late evening performance, which also involves site-specific 3D projections onto the building’s unique architecture:

ZARA: Daughters of Fortune is performed at The Piece Hall, Halifax for two nights only – Friday 19th and Saturday 20th April 2019 at 7pm

(The show will also be performed at the Geraldine Mary Harmsworth Park, in Southwark, London on Friday 10th & Saturday 11th May)